Snow White and Cinderella Meet for a Coffee

by Meliha Avdic 8 months ago in Fan Fiction
Report Story 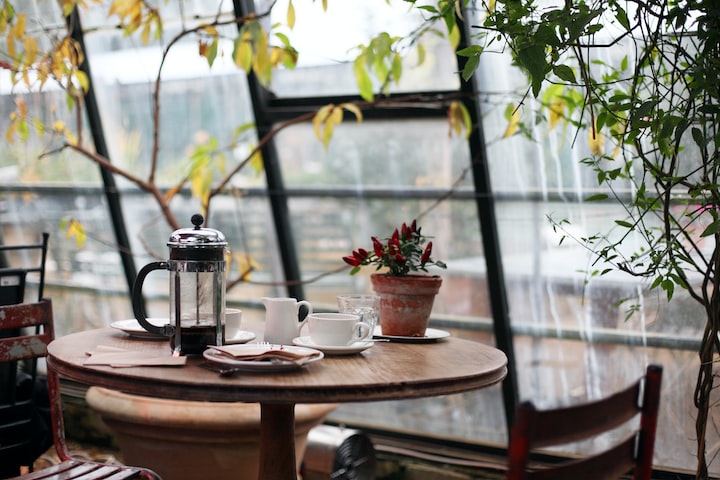 Photo by Kris Atomic on Unsplash

Once upon a time, in a faraway land, a beautiful young woman called Snow White ran into a crowded café to get out of the rain. She ordered her drink, while taking off her coat and shaking raindrops off her back hair. When her drink came she looked around for an empty chair. There were a few scattered about at various tables that were already occupied. Should she stand with all the other people who stood in their groups, or should she ask at one of the tables if she could use the chair? It felt odd to be standing there alone while all the others had someone to stand with, so she searched the tables to choose where to sit.

At the back of the café, in a corner, Snow White spotted a table with just one woman, about her age, sitting in silence and looking into space. The woman, with her long blond hair and big blue eyes seemed like the sort of person Snow White could get along with at least long enough for the rain to stop.

“Excuse me.” Snow White said to get the woman’s attention. “Is this seat taken?”

The blond woman looked at the chair as if she just woke up from a dream and needed a moment to figure out where she was. “Oh no, no, it is not taken. Please…”

The two young women sat in silence, each one busy with her own thoughts, for almost twenty minutes.

“I’m sorry, I feel like a bad hostess,” Cinderella broke the silence with her gentle voice. “You seem to have a lot on your mind too?”

“Oh,” Snow White shook her head and waved he hand as if to say ‘don’t worry about it’. “I’m just trying to figure out what happened, I was supposed to have a fairy-tale marriage, live happily ever after, and all that. And after everything I’ve been through, I think I deserved it.”

“You’re are kidding, right? That’s exactly what I’ve been thinking,” Cinderella sat up, her voice stronger. “After all the years of torture, I think I deserve at least the same number of yours of pleasure.”

“What happened to you?” Snow White enquired.

“Well, it’s a really long story, but in a nutshell, my mother died when I was little. My father married a woman so that I would have a mother, but… Don’t get me wrong, I loved my father, but what the fuck was he looking at? He married the most evil woman in the world and brought her to me to be my mother. And, to make matters worse, she has two daughters about my age, except that they are f-ugly. I mean, mirrors should crack at the sight of them. And the old hag, my stepmother, got jealous and turned me into their slave. For years I did EVERYTHING for them. Literally, everything. I had to get away, so first chance I got, which happened to be a ball at the palace, I was desperate to get there. They, my step mother and step sisters, did everything they could to stop me. They even locked me up. Can you imagine? Luckily, this fairy showed up. If it wasn’t for her, I would still be stuck cooking and cleaning for the witch and her daughters. Which is only slightly worse than what I’m going through now. I need that fairy to show up again.”

“At least you have hope. I am out. I don’t know what I can expect now. I spent my life cooking and cleaning for seven little men who like to go to work. Like you, I had an old hag jealous of me and that’s how I ended up being a slave to some weird bunch somewhere in the woods.”

“No kidding? You were also a victim of an old hag’s jealousy?”

“She tried to kill me. Seriously. She came all the way to the woods just to give me a poisonous apple.”

“Took a bite and it practically killed me. Then this guys showed up and saved me.”

“You were also saved by a young man?” Cinderella frowned.

“Hmm… If our lives were stories, someone would think that this is propaganda against evil, jealous old women, and in favour of young men?” Cinderella laughed. “So what happened?”

“What can I tell you? I mean, he’s nice, has a palace. But, everything in his life came so easy, he’s just incapable of dealing with any problem. He’s expecting everything to just be perfect.”

“Oh, that sounds like my guy. It’s shocking how much you and I have in common.”

“Does he envy your ugly stepsisters? Because mine goes nuts every time I mention any of the little men I spent my life with.”

“I don’t even like them, but they are the only people I know. What is the big deal if I talk about that time of my life? Do you know what the worst part is? He invites them over.”

“Because public image is very important to him. He needs to show that he’s very appreciative. It’s just so shallow.”

“You think that’s shallow. I have to wear makeup all the time, otherwise my guy doesn’t even recognise me.”

“Oh yeah, and the worst part is that I should have seen it coming. I mean, he had to use my shoe to find me.”

“Well… The fairy that help me get to the ball cast a spell on me, to dress me up and get me there, but the spell expired at midnight. I was having too much fun with the prince and completely forgot until I heard the bell. So at the first chime I ran like the wind, and one of my shoes slipped off. I just left it behind. He used that shoe to find me. Serious detective work, which I considered so romantic back then. Now I’m seeing it in a completely new light.” Cinderella shook her head.

“Wait! What happened to the rest of your clothes?”

“Oh they vanished, I was back in my old rugs. For some reason, the shoes were the only ones that stayed behind, like they were real and not part of the spell.”

“Interesting. So you could say that you also though he was your destiny?”

“Yes. That’s what I thought. Now I think he’s my trial. How do I cope with him?”

“Does yours complain a lot? Whine all the time, about everything and anything?”

“Mine is lost in space and time. I’m supposed to just sit in one place and do nothing. Anything I do, I do it better then him, and he just blows a fuse. Like, I’m pretty good with animals. No! I must stay away from all animals so that I don’t make him look bad.”

“Oh my goodness, me too! I have to just sit and understand him no matter how insane he’s being because his kiss saved my life. And I swear, there are times when I think, I know I shouldn’t, but I can’t help it… I think: You really shouldn’t have bothered yourself so much. He makes it sound like kissing me was the hardest thing he ever had to do.”

“Can you imagine how much I hear about how mine went out there and searched the whole town to find the woman who can fit her foot into the shoe? I’m just waiting for the moment I’ll snap and scream: Next time, look at my frigging face, you idiot.”

Snow White laughed “As evil as those jealous, old hags were, at least they did something…”

“And they expected something from us.”

“They expected a little too much from us…”

“Yeah, that’s true.” Cinderella nodded, her mind filled with memories of long days, trying to get everything done.

“But you’re right, at least we weren’t incompetent waste of space.” Snow White also thought back to her long days filled with too much work.

“Because people are out of balance. I mean, why our husbands have such issues with us being more able than them? Don’t they know that we’ve had more experience? Perhaps if they too had to work hard their whole lives they wouldn’t be such dingbats.”

“Why do we even compare ourselves to them? Why can’t they just be pleased they are married to two capable women?”

Both women laughed. Was it so farfetched to expect recognition and respect? Were they asking for too much?

“Here’s my theory,” Cinderella raised her finger “the universe is inclined to them because the universe knows that they need all the help they can get. So, the universe gave them us to push them forward at least a little. But they are refusing any sort of improvement.”

“Oh yeah, they’re convinced that they are already great.”

“Exactly, so we now have a different, and probably even harder task than before – we have to get them to be better.”

“Oh…” Snow White didn’t like the idea. It seemed like she was born to constantly work hard for someone else. “It would make sense,” she said. “Can you imagine what kind of woman they would choose if they were choosing on their own?”

“Oh my goodness, mine would choose a picture of a woman. Something that can’t move even if it wanted to.” Cinderella laughed.

Snow white thought for a moment, then started to laugh “I think mine would too.”

“And that’s what universe should have let them choose. Wasn’t there another way to save us from the old hags?”

Snow White was reluctant to say what she really thought; the old hags could have just died, and eventually they will, “Why did we have to suffer the old hags at all?” Snow White said.

“But what can we do about it now?” Snow White leaned closer to Cinderella, inquisitively examining her eyes.

Cinderella looked back into Snow White’s eyes. She never thought she could do something now, but it seemed like a great idea.

“Oh goodness, it’s stopped raining. I have to go.” Cinderella jumped up.

“Me too.” Snow White was also on her feet in a split second putting on her coat.

“We have to do this again sometime.” Cinderella smiled at her new friend.

The two women exchanged numbers and promised to stay in touch.