Chapter 1: Longwei doubts his eyes when he sees a glimmering oval rock beneath the waterfall pool surface. 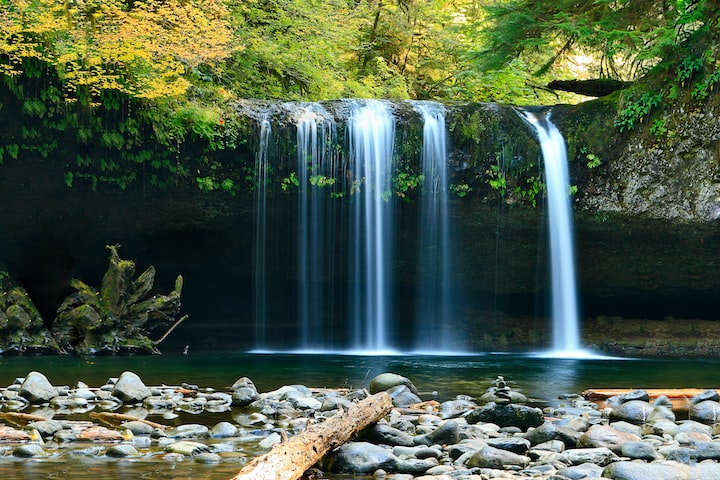 Photo by Jeffrey Workman on Unsplash

“There weren’t always dragons in the Valley. They escaped from lands far away to find refuge among the Emerald Valley pools.” Ranyi injected fake enthusiasm into a tale her tourist groups often enjoyed. A few tourists wanted to believe mythical creatures existed, but magic didn’t exist when her parents and brother needed yuan to feed them. Instead, only hard work and its resultant tan mattered. Thus, she’d call a deer a horse all day long to wealthy visitors.

Flipping her ponytail aside, Ranyi glanced at the back of the group where her wiry little brother, Longwei, had set down the tourists’ packs away from the Dragon and Phoenix pool, one of a hundred pools among the waterfalls. Beads of sweat rolled down his forehead and into his dark eyes, which sweat he wiped away.

Ranyi mused that he must have heard her spout such nonsense hundreds of times. While she answered the visitors’ questions, Longwei eyed pebbles like he’d throw one into the tranquil jade surface. A Chinese man, but with a strong American accent, asked why Disney changed the dragon to a phoenix in the live-action Mulan.

As Ranyi opened her mouth to answer the inane question, a white stone plopped into the water rippling outward. The tourists glanced around for the stone thrower. Ranyi then glared at Longwei, but he busied himself with the packs. For a moment Ranyi had even felt sorry for him.

One day she’d catch him. Until then, she continued telling another story as if nothing had happened. “Li Bai never wrote poetry about this pool, but the locals have circulated a legend that the dragon and the phoenix have laid eggs at the bottom of this pool since their arrival several hundred years ago.”

From the back, Longwei rolled his eyes and Ranyi almost giggled.

Several tourists shuffled around and shifted weight from one foot to another while others had barely caught their breath. Time for a distraction, so Ranyi signaled to her brother.

“Macaque monkeys!” Longwei jabbed a finger toward the bamboo forest below. Even the bedraggled tourists peeked.

“Let’s hurry before they disappear.” Ranyi waved her hand and carefully descended the slippery rocks. Then the group filed along in search of mysterious macaques.

While Longwei gathered the packs, a white flash swirled serpentine-like across the pool surface. He dropped the packs and stepped closer to the water’s edge only to see the typical jade surface. For good measure, he studied the depths where several pebbles and large rocks lay. One rock shimmered like a pearl and then jiggled. Could it be a dragon egg? Longwei shook his head and scampered downward until he noticed he didn’t have the extra weight of the packs. Not again! He trudged back and glanced to the pool bottom once more.

The pearly rock was gone: his eyes had deceived him. Ah, maybe he'd still spin a tale from the trick of the light anyway to any interested tourist children. Uh-oh. The tourists.

Knowing Ranyi would scold him if he dallied any longer, Longwei hefted the packs and plodded forward. Each downward footstep hurt his knee. Soon he’d be just like Yeye with a trick knee if he didn’t get away from the Yellow Mountains. If only he could attend school in the metropolitan capital Hefei, where more opportunities—and fun—lay.

Finally, he caught up with the tourist group, only to get a dirty look from Ranyi. He’d been wrong: he had stayed too long. Oh well, Longwei disappointed his sister multiple times a day, so what was one more annoyance? He filed in line.

As soon as he tossed the tourists’ packs off at his family’s Emerald Valley tour guide shop, Longwei ran down the cobbled steps toward the market. His mouth watered thinking of all the treats he could buy with tips from the American tourists. Tipping may be an insult in China, but Longwei accepted the culturally ignorant tourists’ tips anyway. He loved his pineapple on a stick. Longwei smirked knowing Mama, Baba, and Ranyi would scold him for such behavior.

Hearing rustling around the corner, Longwei stopped and removed the yuan coins from his pockets. Those bully kids who went to private school would probably take his money again. Longwei shoved the coins in his sock for safekeeping before rounding the alley corner.

“Not so fast, Wei-wei,” Xun puffed up his scrawny chest while calling Longwei by his mother’s nickname. Soon his husky bodyguards, Jianyu and Julong, appeared behind the runt Xun. No escaping now.

“What do you want Xun?” Longwei showed the palms of his hands. “I’ve got nothing for you to take today.” Then he turned out his pockets, though Longwei could feel the coins slipping beneath his arches.

“Guess that means we’ll have to beat you up then.” Xun glanced at Jianyu and Julong making fists.

“If you beat me up now, how will you get more money later?” Longwei shrugged. “I can’t keep producing if I’m banged up.”

Behind him, Julong muttered, “Dog fart.”

Then Xun’s face scrunched until he motioned his backup to stand down. “All right, then what else do you got?”

“I know where to find a dragon egg.”

I welcome praise, and suggestions, from you wonderful readers. If you are more familiar with central Chinese culture than I am, please point out cultural errors. I only lived in Anhui province for 4.5 months in 2005.

Please consider subscribing, tipping (how else will I afford dragon eggs?), or a monthly pledge (ooh, I could buy dozens of dragon eggs). You can follow me on Twitter, Facebook, and my personal blog.

More stories from Eileen Davis and writers in Fiction and other communities.