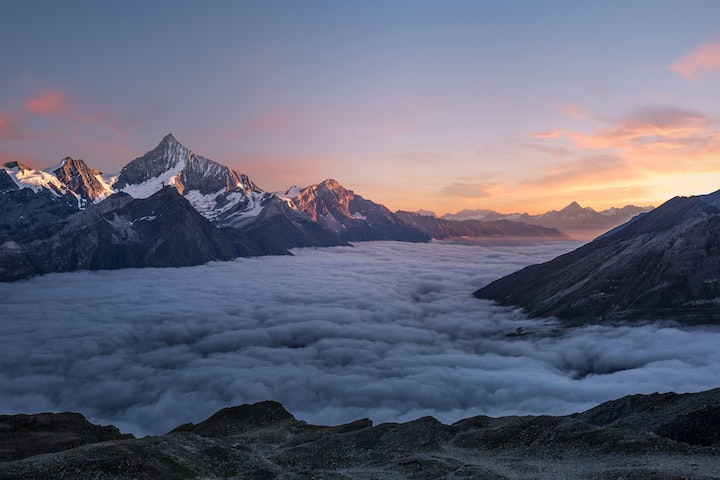 Photo by Samuel Ferrara on Unsplash

This story was written by a 12-year-old boy, under the pseudonym Zeek.

A strong wind blows my popup tent, which wakes me up. It is 7:30 am, and the sun just started to rise. Last night was breathtaking because the Northern Lights decided to show up. Because of that, I did not sleep much, but it was worth it. After looking at his Satellite GPS, Jay says to me;

We are currently five miles away from the Helicopter. So, if we start walking immediately, we will reach our destination in fourteen hours.

Are we allowed to take a break in these fourteen hours? I mean, it is uphill all along.

Of course, we can take a break! We are at least 6 miles away from the peak of Mt. Denali. So, we can do three miles, stop, eat, drink, and rest. And then we can do another three miles. Sounds good?

I just nodded and continued packing my stuff.

I was beginning to shiver as we got higher in elevation, so I added another layer of clothing. The temperature outside was barely 12 degrees! There was at least 1 foot of snow by now. It was 9:30 in the morning when it started to get cold, with temperatures as low as 0 degrees. Our current elevation is 13,276 feet, and there are about two feet and a half of snow. At one point, the rocks under our feet were weirdly flat and, they were cracking. That was when I heard Jay scream;

I then heard a loud splash, and at that moment, I realized that we were on top of a frozen pond! My first reaction was to run to Jay, but I saw that it was not an option since the iced pond was beginning to crack even more. Thankfully Jay got out of the pond safely, but he was entering a dangerous stage of hypothermia. The colour of his skin was a purple-bluish, and he was shivering badly. I carefully walked to the other side of the pond and helped him to his feet. I walked him to safety on solid land. I then quickly opened my popup tent. After that, I started a fire in the middle of it. Even though it was risky, I needed to light it up to keep Jay from dying.

It was barely 11 am. when Jay started to come back to his senses. The temperature inside the tent was a warm 65 degrees, but outside it was way colder with a low of –2 degrees. The tent I owned was a small three-person backpacking tent, so there was enough room for me, Jay, and the small fire. The first words I heard Jay say was;

I will need to rest for another few hours. Go and explore our surroundings and tell me if you can see the peak of Mt. Denali.

- Okay. Be sure to drink the tea I made you that was included in the First Aid Kit. And if you want, there are two more blankets in the front-left pocket of my pack. See ya later! I hope you feel better when I get back!

I exited the tent at 11:30 am. and, a freezing wind turned my face icy pale. The temperature went up a few degrees to 4. About two hours after I saw the northern lights, a big snowstorm settled over us, augmenting the height of snow to 3 feet. But this morning it was nice and sunny. Because of that, I had a clear view of the mountain peak of Denali.

After an hour and a half of exploring, I went back to the tent and saw that Jay had finished packing all our stuff. I closed our tent and, after making sure we had everything, we set off to achieve our goal. After ten minutes of walking, Jay says to me,

You know, kid, we have been through a lot, and we are doing a big project to climb this thing, but you never, ever told me your name. Is that not odd?

I smiled and replied,

I kind of forgot about that. I think it must be because I was too occupied with accomplishing this big hike. My name is Ace, Ace Joneses.

Jay's eyes widen and, he asked me

May I ask you why you want to accomplish this?

I shrugged and replied

Well, because my grandfather did the same thing with a friend named Chris Morris. What? Why?

He let out a loud laugh before saying;

Christ Morris was my father! You didn't even make the connection that he has the same last name as me?

Yeah, of course, I did. But it could have been a coincidence. Things like that happen all the time. But that is incredible!!!

We both started to laugh out loud. We also started to tell each other some stories of our adventurous families that also accomplished this hike. We had a good time for a few hours.

It was 3 pm. when things started getting bad. The temperature outside was –10 degrees. It was snowy and foggy with the occasional rumble of thunder. We could not even see past a yard! I knew that here snowstorms were common this time of year, but I did not know at any expense that there could be lightning strikes! But to my advantage, it started to clear up after thirty minutes of harsh wind and heavy snow mixed with balls of ice.

At 6 pm. we reached the spiky and rocky peak of the tallest mountain in North America, Mount Denali. At an elevation of about fourteen thousand feet, the snowy top of Mount Denali is quite cold in temperatures, but with the right equipment, hiking the tall monstrous mountain is a fun goal to achieve. I looked at my smartwatch and saw that it was 6:44 pm. when we finished setting up our small camp. We had two three-person tents and a three-foot-wide corridor made of aluminum that connected them, with a small fire between them to keep our tents and the aluminum corridor warm.

At 1 am. a horrible sound woke me up. I got out of my tent and, a huge white light took me by surprise and blinded me. I heard Jay's voice but could not make up what he was saying since his voice drifted farther and farther away into the white light, and then it just disappeared, and I was left in total darkness. I did not know what to do, but I needed to make up my mind. And fast.

My life is full of roadblocks and experiences. I healed through writing and love doing it. I worked as a freelancer for a few years and still like having a few projects. Artist at heart and healthy lifestyle is what defines us.

More stories from Hippy vagabond and writers in Fiction and other communities.