by Margot Lambal 7 months ago in Short Story

In a city where magic users have to lay low, Mitchell stumbles upon a stranger who might be like him 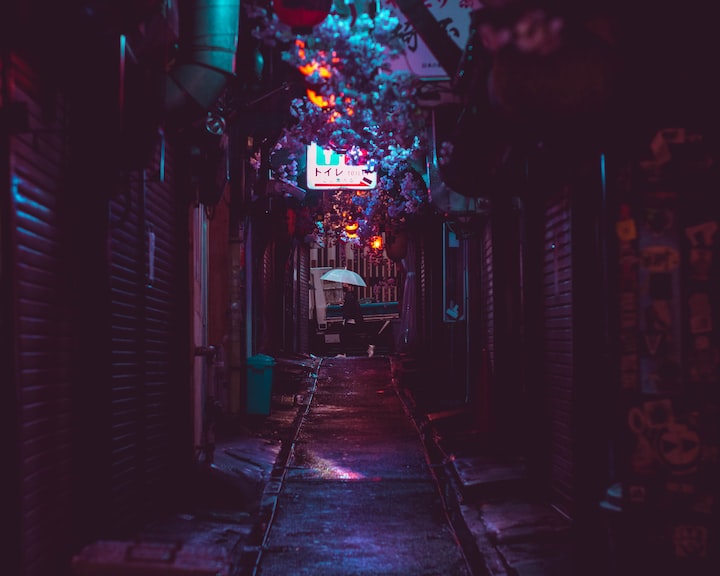 Photo by Agnis Leznins on Unsplash

Finally, after ten long hours of boredom, Mitch’s shift came to an end.

As Mitchell locked the bookshop for the evening and said goodbye to the part time worker who had closed with him, he realized how truly exhausted he was. His body ached, his mind felt frayed like worn rope, and the magic that thrummed under his skin prickled incessantly for release.

He felt a little relief as the cool nighttime air brushed his skin and eased his mind and body some. Shoving his hands in his jacket pockets, he began the trek home to his apartment in the middle of town. Wordlessly, he lets his mind drift to simpler thoughts as the fresh air soothes him.

Halfway home, his peaceful journey was shattered along with the silence in the streets.

A shout of pain followed by a terrifying sound of something heavy hitting something hard reached Mitchell’s ears as he passed an alley.

Violence wasn’t an unusual occurrence in this city, Mitchell knew. He’d usually keep walking. But something, the magic that thrummed under his skin, reached a feverish thrum, begging him to stop walking.

As he looked down the alley, three men grabbed their victim- who was in the process of sliding down the wall in pain- and hit him hard under his hood. The victim’s head snapped back on impact and his hood flew off.

Even with little light, it was clear it was a kid, and Mitchell’s blood boiled.

For a second, the rational side of Mitchell’s mind takes over. This isn't his problem, and they haven't yet spotted him. The only thing he'll get for saving a street rat kid is a pat on the back, and Mitchell doesn't need thanks.

He really just wants to get home.

The kid should learn the way of the city. Everyone else had.

But then, the kid looks to the entrance of the alley and meets Mitchell’s eyes, and, oh fuck, now he knows that Mitchell’s standing there. Mitchell’s chance to walk away is gone.

He gave a quick nod that he doubted the kid saw in the dim light and surged forward.

“Hey!” He shouted. The attackers stiffened. One dropped the kid, who hits the ground with a little gasp of relief that makes the softer side of Mitchell’s heart melt a little. “What’s going on here?”

“Why do you care?” One of them spat back.

Mitchell knew then that they wouldn’t attack him. If they had a reason- punk stole my wallet or he hit me first - they would say it outright. These assholes were looking for small fry to beat on, and this kid had unfortunately fit the bill. Their kind put on a tough act, but bolt at the first smell of real trouble.

“Get the fuck out of here, or I’ll call the cops,” Mitchell did his best to sound intimidating. It worked.

One of the other men laughed, but the sound is nervous, “Ha, whatever, we were just playing anyway,” He motions to the others. “Come on, guys.”

One of them shoves Mitchell hard as they pass, but they leave quickly.

Now, it’s just him and the kid, a motionless heap against the wall.

Once again, the voice in his head told him he could walk away now. He did his job, the kid could do the rest on his own.

“Hey,” Mitchell said again. He eased closer to the kid. “You okay?”

“I’m fine,” Came a hoarse reply. And, goddammit, now he’s talked to the kid. Now his second chance to walk away is gone.

The kid moved to stand, hands groping the wall for support. He stood, swayed, and collapsed with another little gasp. Before he could hit the ground, however, Mitchell lunged and snatched the kid’s arms to break his fall. He easily maneuvered the kid so that his arm was over Mitchell’s shoulders. The kid's head lolled against his chest, but his eyes were open.

Mitch could feel the thrum of his own magic connect on contact with the weak and wavering hum of the boy’s own power, and he now understood why the boy hadn’t fought back.

Can’t risk letting the power out and getting taken down for it.

“You got anywhere to go?” Mitchell asked, but he could already guess the answer.

The kid shook his head.

Mitchell hauled him to his apartment. The kid was stupid to trust him, a stranger who was taking him god knows where. He suddenly felt a little relieved he found him instead of some lowtown creep.

He got a good look at the kid under the lamplights. He wasn’t bad looking underneath the cuts and bruises- nice facial structure, prim lips, and dark eyes. Mitchell thanked the heavens someone with bad intentions didn’t come along. A handsome helpless kid meant a lot of things to a lot of people in this city, not to mention one with power, and whichever urchin found him would make his apparently shitty life a hell of a lot worse.

They made it to Mitchell’s apartment and Mitchell ushered the kid inside. It was alarming how docile the boy was to it all.

Mitch went to find his first aid box and he returned, first aid box in hand, the kid was propped weakly against the wall and breathing hard. Mitchell curses himself for not giving the kid a seat earlier. He moves to grab the kid’s arm, but the kid jerks away. The sudden movement causes his knees to buckle slightly and he stumbles back against the wall.

“What are you going to do?” The kid asks.

“Hey, it’s ok,” Mitchell soothed. He pressed his hand hard to the boy’s chest and concentrated on bringing his power to full volume until he saw the registration on the boy’s face. “I’m like you, alright? I’m just going to fix you up.”

The kid seemed to accept this hesitantly. He nodded stiffly and perched on the couch without letting his eyes leave Mitchell’s form.

He instructed the kid then to take off his jacket. Through a thin white t-shirt, Mitchell observed that boy’s arms and chest were worse than his face.

“That wasn’t your first beating,” Mitchell guessed. “Those assholes were mean looking but they didn’t pack this bad of a punch.”

“If I get arrested, I get sent home,” The kid said. And, oh, the kid’s a runaway. Mitchell’s got a soft spot for those apparently. “Or worse, they find out what I can do and turn me in.”

“You trust me not to turn you in?” And suddenly the kids eyes widen in panic.

Mitchell had hoped the kid’s floundering would be in some twisted way funny, but really it just made his chest ache. He frowned and goes back to the split lip with an alcohol pad in hand.

“Please,” The kid sounded near panic.

Henry slowly relaxed as Mitchell fretted over him. Mitchell worked silently, lost in thought. He stuck mostly to traditional remedies, but around the kid’s face he summoned enough power to his fingertips to gently reset Henry’s nose and advance the healing of the bruises around his cheeks until they were nearly gone. The magic was warm as it flowered from his fingertips, and Henry sighed with relief as his ailments began to disappear, eyes fluttering closed and head tilting into Mitch’s hand appreciatively.

Suddenly, Henry reached his hand out too and grasped Mitch’s wrist. A sweet feeling flowed into his mind from the kid’s palms, it felt like the warmth of sunshine, memory of a cologne, the smile of a loved one. Mitchell closed his eyes and savored the euphoria until Henry pulled away.

An empath, then. Emotion worker.

Could this kid be the next member of the group?

He remembers the day that Daniel had burst into their hideout with a confused looking boy in tow. Another one with powers, Daniel had explained, he’s like us. That kid was Vic, and after all these months, Vic had become an irreplaceable addition to their band of outcasts.

He remembers the day that Jack had introduced them to Reece. Reece was on the run from hunters, outed for his abilities at his school a few states over. After a bad hair dye and a wardrobe change, he stuck around.

Mitch, Daniel, Micah, Jack, Vic, Reece. All outcasts, all blessed (or maybe cursed) with abilities they were still learning to control. Henry was like them too, it seemed.

Finally, Mitchell swung around to his jacket and fished his phone out of one of the inner pockets.

“Wait,” Henry shot forward. “Who are you calling?”

Mitchell waved him off, which did little to calm him down.

Micah picked up after a few rings.

“Hey,” As gently as possible, he shoved the boy back on the couch as he scrambled to grab Mitchell’s arm. “I know you said we weren’t meeting tonight, but something’s come up. What time do you get off work?”

“Eleven,” Micah said, immediately perking up. “Are you hurt? Did something happen?”

He hung up and tossed his phone onto another chair in the corner.

“Can you stick around until eleven-thirty?” He asked.

“Who was that?” Henry demanded.

“A friend of mine,” Mitchell said simply. “We’ve got our own little group of friends, and you look like you could use a few. People like us.”

In the end he convinced Henry to stick around by bribing him with a hot meal, something the boy clearly hadn’t had in a long time. He thought Jack would appreciate it.

He returned to the apartment with a pizza and several bottles of various sodas for the kid to choose from. Henry wolfed down seven slices of pizza and Mitchell knew he made the right call keeping him around.

Maybe he wouldn’t rest tonight, but he could tell that meeting Henry was better.