Sleepless on the Train 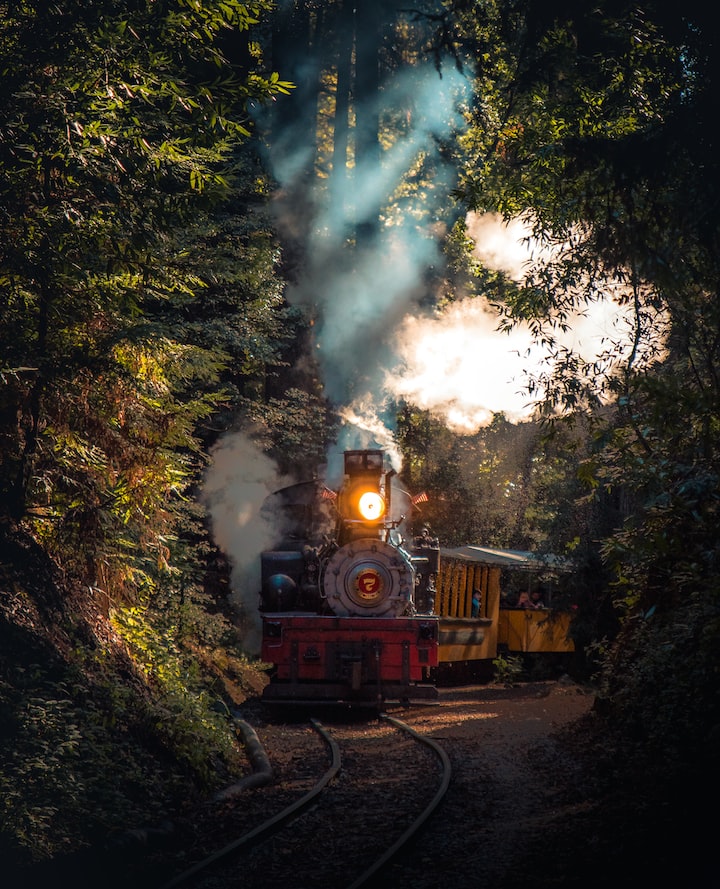 Steve was a ten-year-old boy. He woke up riding on an amusement park train. It was still moving, even without a driver. He was the only one riding on it, until he heard growling noises coming from the back of the train.

It was very dark. The only light was coming from the train. Steve rubbed his eye, trying to wake up from a dream that was not a dream. He pinched himself; it hurt and left a mark.

He shouted for help, but the only thing he heard in reply was more growling coming from the back of the train. It was getting closer to the front of the train, where he stood.

Steve glanced around, where can he go? He couldn't jump off the train because it was going too fast. He tried to find a place to hide. The growling stopped. Steve wondered if he was safe hiding under the train’s seat bench.

A few minutes passed and the growling started again, sounding much closer than before. A talking teddy bear came out of nowhere. "Hey, what are you doing hiding under there?" The teddy bear asked. The growling noise stopped.

Steve moved out from under the bench and looked curiously at the cute teddy bear. [ Is this teddy bear really talking to me?]

The teddy bear asked Steve if he was by himself. "I don’t know how I got on this train. I woke up riding on it." Steve told the bear.

“Where are my manners? I am Mr. Hungry Bear.” the teddy bear told Steve.

Steve asked Mr. Hungry Bear, "Did you hear that?”

“Kids, shouting for us to get off the train, and to hurry." He was surprised the bear did not hear the children voices.

A child’s backpack was thrown into the train from outside. “Where did this come from?” Steve investigated the blue backpack with the amusement park train logo on it. The zipper was stuck, so he had a hard time trying to open it.

The bear moved to the engine part of the train. "Boy, why don’t you get some sleep while I go to the front and see if I can stop this train." Mr. Hungry Bear told Steve.

The growling noises started again, and this time, they came from every direction.

Steve finally opens the backpack. Inside, was just a tiny blue book with the train on the cover and some teddy bears with sharp looking teeth. It was a manual for the train. It has instructions, how to remain safe in the train and how to keep the teddy bears away.

Steve was confused, for Mr. Hungry Bear seemed very nice. He was trying to help Steve.

The manual stated, to find the key that stops the train, you must catch the teddy bear with a blue star on its belly, open the teddy bear up, and retrieve the key inside.

The growling continued getting closer. Steve looked at the back of train and he saw teddy bears coming at him with their sharp teeth flashing. Steve started to run toward the engine of the train, shouting, Mr. Hungry Bear’s name for help.

He dropped the backpack with the manual in it on his way to the engine of the train.

Steve did not see the teddy bear's sharp teeth earlier.

Steve was scared, "What are you going to do to me?”

“Why eat you of course. We are very hungry. It’s not often we get children here.” The Teddy Bear answered.

Steve remembered the magic word that was in the manual . He threw off the teddy bears that were on top of him, but they kept on coming.

Steve shouted the amusement park's name, and he was back at his house in his bedroom.

Here is my first entry to the Runaway Train Challenge 2022.