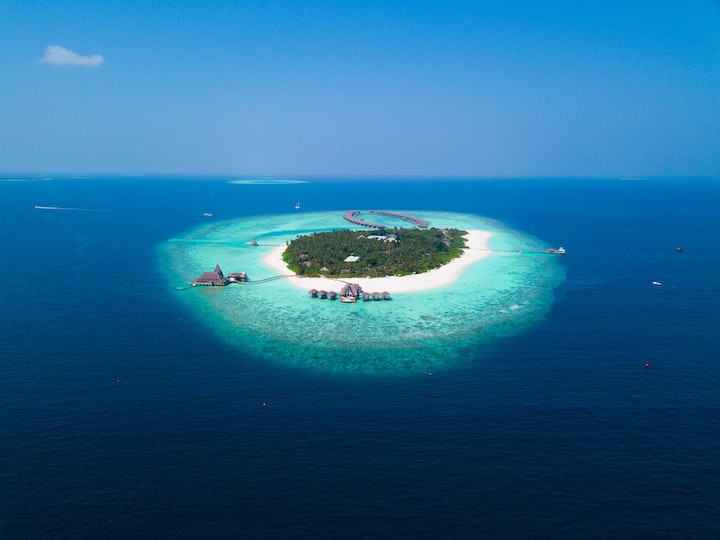 Photo by Zunnoon Ahmed on Unsplash

That was Sam's first thought as she stood on the gangplank of the Caribbean Jewel cruise ship. To her front, the tropical air enveloped her like a hot wet blanket, stifling and thick. Behind her the endless noise of screaming, crying passengers and static-laden, muffled messages of reassurance being broadcast on the loudspeaker.

Attention passengers, we've run aground a small island. There is no danger to you or our crew. Please remain onboard the vessel for your safety as we restore satellite communication. A rescue ship will arrive in due course. Join the Capitan in the main dining room for complimentary drinks. We thank you for choosing Caribbean Jewel and thank you for your cooperation.

She smirked, almost laughing at herself. The situation would be hilarious if she were reading about it. A middle-aged woman, on the brink of divorce, dreaming almost every day about escaping her life on a tropical island, only to find herself stranded on a tropical island! You can't make this stuff up.

Yet here she was.

She couldn't stay on the ship. The panic, the tears, and screams, they were too much. As thick as the air was outside, it was thicker onboard.

The best she could tell, they must have miscalculated and ended up smacked up on the edge of an island somewhere off the coast of Argentina. They'd visited Peru and Chile and went around the Falklands, headed to Buenos Aries. She took a few steps off the ramp and onto the soft white sand. It wasn't like the ship was leaving anytime soon, she thought.

She looked around for signs of life. Nothing. Palm trees, sand, the ocean, and the odd patch of long grass. She could hear birds in the background, blending in with the sounds from the boat, but that was all.

She plopped herself on the hot sand, wiping her damp blonde locks from her face. In a strange way, it was just what she needed, someplace quiet, someplace with no people whatsoever so she could think.

Where did she go wrong? Why did Jasmine, her wife leave her after almost 20 years? Who was the woman in the picture on her phone? Was she really just a friend? Sam didn't think so.

"It wasn't all her fault," she said aloud. And it wasn't. Jasmine, her Jazzi, begged her for years to spend less time working and more time with her, but she was trying to build something, a life. A life for both of them. A life and a future free from the struggles they both knew all too well.

Tears streamed from her green eyes. Another announcement from the ship. Same old, same old. Free drinks, no danger, working on it...whatever. Her tears melted into anger.

"Bitch!" she mumbled. All those years of work. All the sacrifice. She provided Jazzi with a beautiful home, in a nice neighbourhood a million miles away from Elegant Acres where they both grew up.

She scoffed inwardly. Elegant Acres. Funny how the worst poverty-stricken housing projects had the most opulent-sounding names as if they could fool people into thinking they weren't poor. Poor people know they're poor. The lack of food, rats, mice and violence in the area are a dead giveaway.

Jazzi supported Sam all through her years at medical school, working nights as a waitress at Buns Burger Bar. They had a plan. It was a good plan. It was working.

Sam finished school and her residency and took a position at Metro Memorial Hospital in the ER. Jazzi quit her awful job selling greasy burgers to fat guys in trucks and decided to stay home and work on her passion, art. There were plans to adopt a baby. And then came Jude and everything changed.

Sam continued to grumble to herself cathartically.

She heard a rustling. She stood up, on guard, and took a couple of steps toward the stationary ship. Whatever it was, she was pretty sure she could outrun it.

A pair of dark eyes, almost black peered out. They were soft, almost knowing. Then a body, not very tall, squat, with tiny legs that seemed structurally incompatible with the bulk of what lay above it.

Sam inhaled deeply and relaxed a bit. She reached out her hand to the visitor. Well, she couldn't really call it a visitor, she was the visitor.

"Hi," she whispered, "It's okay." She raised both hands, palms facing the newly discovered being to show she was unarmed and meant no harm.

The dark-eyed girl, she was obviously female, took a few steps, looking quizzically at Sam, her head cocked to the side.

Sam sat back down on the sand. She looked at her new friend.

She pointed to herself, "Sam," then to her.

Nothing. Obviously whoever this was didn't understand English.

"Sally," she pointed. That would be her name. At least for now.

"Sally," she started, "I took this cruise to make my wife mad. She always wanted to go on a cruise but I was too busy." Spite seemed like such a great idea at the time.

Sam continued, "I worked my butt off for her and she cheated. She actually cheated on ME, can you believe that?"

"I worked day and night. I was never home I worked so much. We were going to have a family, but she went and started messing with Jade!"

Sally stepped closer, sensing the sadness. She wanted to reach out, to embrace her, but couldn't. All she could do was listen.

"Jade!" Sam wiped tears from her face as the boat boomed the same announcement. "Jade can't do a thing for Jazzi. She doesn't even work!" The very idea of her wife with a kid with no job, no prospects and nothing but time to play video games and fool around made her sick to her stomach.

Sally moved her head from left to right, three, four times, as if she was trying to say something.

"No, it's not like that at all!" Sam's green eyes blazed. "I did it all for her. I was doing what I had to do to give her the life she wanted!"

Sally took off like a shot. She was pretty fast for being so short and thick. She flew up a tree as if it took no effort at all, knocked down a couple of coconuts, and hammered a hole into each.

Sam walked over and grabbed one, grateful for the drink.

"What should I do, Sally?" she begged.

Sally pranced around the remaining coconut on the ground.

A horn sounded piercing the humid air. Then a voice over the ship's speaker,

"We've established communication with the SS Beaufort, they will be arriving in about 35 minutes to take all passengers and crew aboard and back to Miami. Please gather all personal belongings. Full refunds will be provided and again, we thank you for choosing Caribbean Jewel."

Sam sucked in the thick air. She looked at Sally. She wasn't sure she wanted to leave. Somehow, on this island in the middle of nowhere, she met someone who understood. She met someone who helped her sort out her thoughts without even a hint of judgment. She just listened. It was the most precious gift she could have ever received.

Sally's nose wrinkled into a smile. She looked toward the ship then back at Sam. She blinked. She didn't know how to say it any other way, but Sam belonged on the boat. She belonged with Jazzi. She needed to go back and try.

Sam looked at her friend and nodded. She reached out and touched her face.

"Thanks, Sally, thank you for everything." Then she grinned, "Wanna know why I called you Sally?" she asked.

"Because Toucan and Sam just sounds too weird," she laughed out loud as she kissed the bird on the head and headed back to the boat.

Retired legal eagle, nature love, wife, mother of boys and cats, chef, and trying to learn to play the guitar. I play with paint and words. Living my "middle years" like a teenager and loving every second of it!

More stories from Misty Rae and writers in Fiction and other communities.