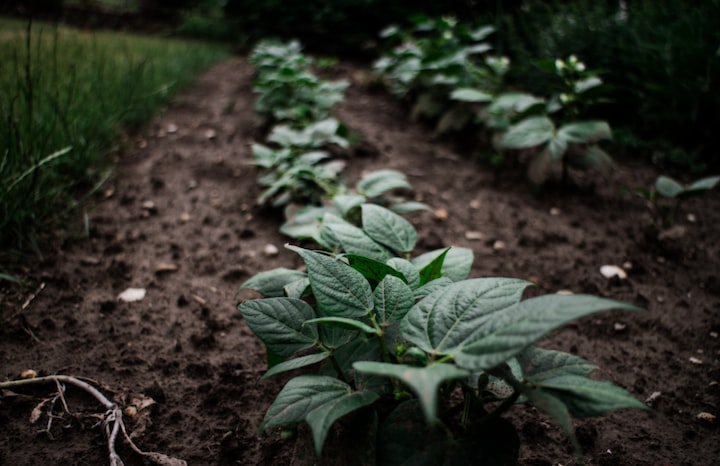 Photo by Lukas Langrock on Unsplash

"I can't go again, Gertrud, no matter what you think the babe wants." He avoided looking into the eyes of his wife, who was stretched out on their bed, her mound of a belly pulling the fabric of her dress tight.

She turned her face away from him. "But these cravings are so intense, Heinrich! And the rampion leaves you got at market last week just were not the same." Her face was pale when she turned back to her husband. Her eyes were glazed and fevered looking. She moaned, "Please, Heinrich."

Heinrich turned his back on his expectant wife to look out their cottage window. The view from the window was of a well tended garden. Flowers, herbs, and vegetables grew in neat, precise rows. Plants that should not have been ready for weeks or months seemed to grow plentiful. A low stone wall, covered with years of moss, bordered everything. Beyond the garden was a small stone cottage, much like their own. This cottage, however, was inhabited by a witch. Heinrich sometimes saw her hobbling around outside, pulling weeds or checking her herbs. She looked harmless enough, but Heinrich had heard from the villagers that she could work spells for love and fertility, or lay curses on those she hated. One old woman swore the witch helped her daughter-in-law poison her son.

Several weeks ago Heinrich had stepped over that low stone wall in the middle hours of the night and pulled a fistful of rampion from the witch's garden. His wife had been rambling for weeks about how tasty and satisfying it's deep green leaves looked. He did not want to go into the witch's garden again, but it seemed his wife was obsessed. She could talk of little else.

"I will not ever ask again, Heinrich," his wife whispered. "Do this for me, for our babe, one more time and I promise I will not ask again. I will make do with the weeds from the market until the babe comes."

Looking at his wife, at his lovely Gertrud, whom he had adored since childhood, seeing her now in her pain and discomfort, Heinrich knew he would not say no.

Heinrich waited until the hour was nearing midnight before he left Gertrud, moaning softly in her sleep, and slipped out into the darkness. He stepped gingerly between the rows of their own humble garden, where the turnips and lettuces and carrots never seemed to grow as well as those on the other side of the wall.

The low wall was easy to get over. Heinrich was a tall man, and it stood about equal with his waist. He hoisted himself to sitting, swung his legs over, and gently dropped down, careful not to make a sound. The peppery green leaves of rampion grew midway through the garden. By the light of the moon, Heinrich cautiously made his way.

Coming to the right row, Heinrich glanced anxiously around. Seeing nothing, he bent to pull a handful of the leafy greens from the earth.

"Best not touch those."

Heinrich nearly fell over in his attempt to stand and turn around at the same time. A squat dark figure had emerged from behind the climbing beans in the next row. It took a step closer, coming into the moonlight. The witch did not look harmful. Her tiny body was wrapped in blankets to keep out the chill of the night. She had a thin face, with rather smooth skin considering how old Heinrich had heard she was supposed to be. Bright blue eyes peered at him from beneath bushy brows, the corners crinkling slightly as they narrowed. A wisp of long, shiny gray hair escaped from beneath the blanket she had draped around her head and shoulders.

"Moonlight is wonderful for gathering chamomile," she said. Her voice was surprisingly soft and musical. She motioned to the rampion. "But that is best gathered in the day, and not by intruders." Recognition dawned in her eyes. "You live next door, don't you? Why are you here?"

Heinrich dropped to his knees. "My wife is with child," he croaked. He cleared his throat. "She saw your beautiful garden, and your rampion, and had such a longing that it is driving her mad. She says the babe within her will have nothing else." He looked up pleadingly at the witch. "Please, I am sorry to have trespassed. I will leave, but please have mercy."

To Heinrich's surprise, a small ironic smile grew on the old woman's face. "So you have heard the rumors," she whispered. She motioned for Heinrich to stand. "Up with you. I will not curse you or turn you into a toad or whatever else you may have heard. And I will not deny a pregnant mother." She bent and deftly ripped handfuls of rampion from the earth, filling the basket she had half filled with beans and chamomile. Waving towards the hut, she said "Check in the window and make sure my boy is still asleep."

Heinrich stepped over and peered through the slight opening in the shutters. A small boy, about seven or eight, lay on a pile of blankets in front of the fireplace. His black hair gleamed in the light of a small fire. The boy was too young to be the woman's son. A grandson perhaps, or a street orphan she had taken in to help her in her old age. What he could see of the hut looked surprisingly normal; not like the lair of a wicked witch at all. A clean scrubbed table with a few dishes stood in the corner, bundles of herbs hung drying from the ceiling. He turned back around and nodded to the woman.

She had just finished giving the vegetables a quick wash in a barrel of rain water. Heinrich noticed that a large turnip and a handful of carrots had also been added to the basket. The woman is generous, he thought with appreciation.

She motioned for him to follow, and they took the long way around the wall back to Heinrich and Gertrud's hut.

When they got to the door Heinrich pulled it open and motioned for the woman to go ahead of him. She stepped across the threshold, bright eyes searching in the darkness.

"Give me a moment. I will light a candle," Heinrich whispered as he followed her in.

"Nevermind," the woman muttered. "I prefer the moonlight. Just open the shutters a little wider." She glanced at the sleeping form on the bed. "Quietly."

As Heinrich moved to the window, the woman stepped towards the bed. She gently lay one hand on the mound of Gertrud's stomach. With the other hand she seemed to rake the air above Gertrud's eyes. Gertrud's features, which had looked taunt and strained, relaxed, and a contented sign escaped her lips. She then placed both hands on Gertrud's face, cupping it between her crooked fingers. Those fingers began to move in slow circles across cheeks and chin, then across ears and neck, down to the shoulders. Moving her fingers in small circles, the woman worked her way across Gertrud's arms, chest, stomach, and legs. Gertrud made small, happy noises, but did not wake up. When she reached her feet, she carefully removed her stockings and worked in small circles there too. She grinned up at Heinrich, "Your wife has very large feet for such a small woman."

Heinrich, who had been watching in quiet amazement, could not help smiling back. This was something he often teased his wife about, and she would not like to know that the old woman had noticed. "She's sensitive about it," he answered softly.

"Our little secret." The woman winked. "Come. Hold her hand while I check the babe."

"You are a midwife?" Heinrich asked as he sat on the edge of the bed and took his wife's hand in his lap. Gertrud's long blonde tresses had become matted around her face. He carefully moved them away, and tenderly lay a hand on her forehead.

"I am many things. Midwifery is one of my skills." She moved her hands across Gertrud's stomach again, this time pressing lightly in places, then lowering her ear as though to listen. "Does your wife complain of much pain or discomfort?"

"No, not too much. Only near the day's end, when she has been on her feet for too long."

"Good. That's good." She reached up and pulled Gertrud's eyelids back, then carefully moved her lips back from her teeth. "She seems to be in good health. Her teeth look strong, and the whites of her eyes are clear. You eat well?"

Heinrich cast his eyes to the floor. "We did eat well," he muttered. "In our other village, where we had family and friends and a small farm. Then a sickness struck. It killed many of the people. We lost brothers, sisters, neighbors, nephews, and our own small babe. Our first son." Heinrich paused, wiping the back of his hand across his eyes. "When Gertrud discovered she was carrying again, we left. She was so afraid the sickness would come back there. It was too painful. So we loaded a wagon and we came here. I brought seeds to plant, but they had not done well. We had a goat, but it died. There are several chickens in a coop on the other side of the garden. We have the eggs and we forage in the forest."

The old woman nodded slowly. She had heard of sickness hitting small villages. She pulled the stockings back over Gertrud's feet and said "I will come back in the morning. The babe is asleep now; I wish to feel it when it is awake. And I wish to speak to your wife." She pulled a small vial from beneath the folds of her clothing. "When she wakes, she can eat the rampion leaves, with some of this drizzled on them." She raised an eyebrow at Heinrich's suspicious look. "Not to worry. It's only dandelion honey. It's sweet, and it will keep her healthy. She'll like it." She set the vial on the table, then moved towards the door. "Goodnight, Heinrich."

After she had left, Heinrich grabbed the vial, pulled out its cork, and sniffed. It smelled sweet and rich and a bit tangy. It was only honey. As he set it back down, he realized that he had not asked the woman her name. He felt slightly ashamed of his rudeness. He should have stopped her when she left. Then he felt a chill as he realized that she had called him Heinrich. He had not told her his name.

More stories from Kari McLeese and writers in Fiction and other communities.