by Jacopo Mulini 11 months ago in Fable
Report Story

The last day in the life of anyone 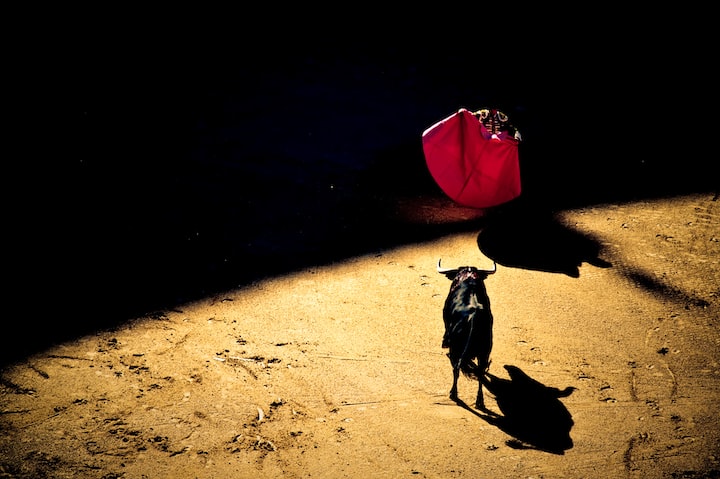 Photo by Giovanni Calia on Unsplash

They took my father away when I was young. Loaded him into a fumey old truck that rattled and groaned as it left us behind in the field. They didn’t tell us anything. I haven’t seen him in years.

They take all of us eventually. This morning they took me.

With my jaw on the ground and my legs folded beneath me, I felt the warmth of my life drain down from my shoulder. My mouth grew drier as the Matador bowed, turned, and bowed again. And as the crowd cheered ever louder, I came to realise that this was everything that my life had ever been leading to. From the days of my youth in the field, just waiting for my father, to the smell of piss and blood and fear right before the door flew open and I was alone before the man with the sword and the red rag.

For a transcendent moment in the blinding sun I was distracted by the beauty of the dancing dusty breath of the earth as though my consciousness knew to savour one last thing. I had breathed in some peace right before I was overcome with rage. And that’s when they won. That’s when they got all they wanted from me.

For a moment before I charged the man, my attention settled on a pool of dried blood streaked through deep drag marks, and it was then that I realised that this was it. This was the race that the rats had spoken of. The oppression of the system that had set me up to live a life of misery, only to die ‘honourably’ for the brief attention and enjoyment of the elite. This was the purpose of our ever-disappearing kind.

I’d thought that I was just prone to feeling the darkness when I was young. As a calf turning into a bull, I was listless and reckless. I grew up without a father to guide me through my adolescent meltdowns, and without a mother who always seemed to be pregnant and feeding the young; I realise now as I lay dying in the dirt that they forced her. So all I would do is fight with the other young bulls. Entropy would release our pain through violence, to pass it on to the next poor soul like a poorly kept secret. We were all the same. These elites had controlled everything, right down to the formative trauma that would make us react with rage exactly at the moment that they wanted us to die.

It was a domesticated fate, a lie. To create generations of disconnected, disenfranchised cattle that would just go on dreaming of a savannah but settling for a pasture, living their mundane day-to-day pointless lives until called to die, being told they’d lived with ‘honour’. To leave a legacy that living with miserable discontent is honourable and the way of our culture. To keep us down and racing to die.

We are ticket stubs. We are roaring cheers. We are bloody pools. We are pieces of meat. We are forgotten. We are repeated. We are all fated the same way. We are entertainment. We are their ‘raging bulls’. We settle for a mediocre life until the moment before death when we realise that we’ve been played. We lived a life to serve the 1 %.

I watched as the blood pooled out onto the earth beside my cheek and I wondered if I was my absent father, and if I was my new-born son. Destined through every generation to die in the same undignified way, on the same circle of dirt. Sacrificed for the brief attention of the powerful who just like to watch things die.

I did not fear for my life as death knelt in the dust next to me, I just wept knowing that my sons would be here soon. How would they ever know it was coming?

I wonder what happens to the cows?

More stories from Jacopo Mulini and writers in Fiction and other communities.