by Lin Corey about a month ago in Fantasy
Report Story

The beginning to an epic tale of an unlikely friendship 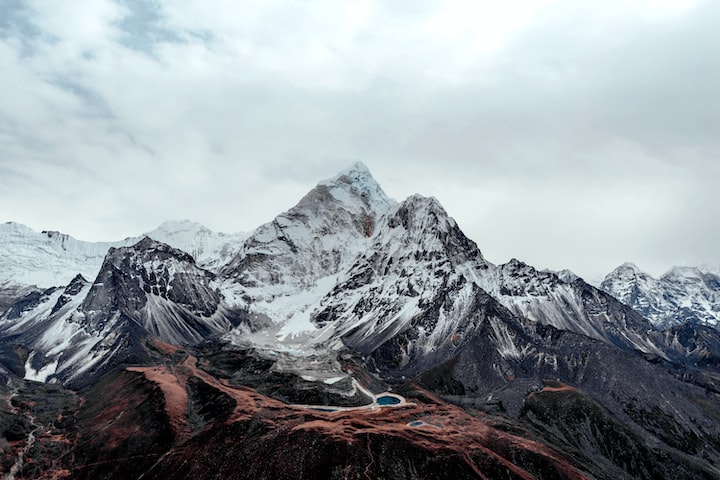 Photo by Craig McKay on Unsplash

There weren’t always dragons in the Valley. In fact, the barren stretch of miserable wasteland known simply as the Valley had never hosted any form of life save for the occasional serpent or falcon that dared scout the rocky expanse of canyon and field for prey. What little plantlife that managed to grow amongst the sheets of stone was often scorched by the heat of the sun, and water was just as scarce. One would think that dragons, being firebreathers, would thrive under the merciless rays, but even we have to take shelter for the greater extent of the day, lest we shrivel like the weeds. Caves, some of which were natural, some of which we dug ourselves, served as our dens. Over the years we created tunnels connecting these tight, dark domains. Dragons are social creatures, you see; we live in families that we call clans, which can range anywhere from a dozen to over a hundred dragons.

My name is Ailith. I am a sixth-generation member of the Torrent Clan. There are about three-dozen members in my clan, which is rather large for these times. Many dragon clans decreased horrifically in number since the Siege. Oh yes, I suppose I should tell you of that as well.

How we dragons came to live in such a terrible place happened through an event we refer to as the Siege. We mighty beasts used to reside in the Whispering Peaks, the mountain range that now tauntingly sat in the horizon, at the very edge of the Valley. Our city was magnificent, a glittering fortress built into the mountains themselves, with monstrous ceilings so high it felt as though they weren’t even there, and dragons could fly around as if they were out under the sky. Surrounding our city was a lush forest of thick, short trees teeming with beautiful wildlife such as yaks, mountain goats and cougars.

All we knew in the mountains was peace. We were skilled in the arts of music, literature, and painting. Our greatest pride, however, was the mine. The Whispering Peaks were laden with jewels and fine minerals throughout their rocky depths. We would unearth the precious metals and gemstones for their healing properties and for food. Dragons have a second stomach for digesting harder substances such as bone and rock. Consuming the different metals kept the clans thriving. We would store them in a large chamber, which any dragon could access for feeding time. Being masters in the arts of mining, we added to our stash daily in impressive quantity, amassing a hoard that would be the envy of most any creature; and so it was.

It was early morning when they came, the armored brutes who call themselves “humans.” The sun had yet to rise, so the land was still in darkness. I was part of a patrol that fateful morning, and was the first one to notice the light of their torches. They set the forest ablaze, and the wildfire spread like water. They struck with brutal efficiency, swarming our defenses in great numbers and smashing through our walls with massive stones launched from catapults, drawn to our metals and jewels. I remember with great clarity the stinging pain of their arrows, which had left many a scar on my sapphire-blue hide.

The humans took everything from us dragons and forced us down the mountain. Confused and terrified, we who survived had fled blindly into the Valley. After having found a cave to shelter in, we didn’t think things could get any worse. It wasn’t until the morrow that we discovered the merciless heat that plagued the Valley by day. Some succumbed to the temperature, while others perished from thirst or starvation. Only now are we truly learning how to live amid this dreadful land.

It was on the morning that would mark our fifth year of living in the Valley that I sat upon a rocky hill to examine my home. I was three years of age when the attack happened, considered the age when a dragon reaches her “teenage” years. I am now eight, and will be a full adult at ten. The expanse before me was still cloaked in the darkness of the night, yet I could see perfectly well; we dragons had developed incredible night vision thanks to only being outside during the cool of nightfall. I did this every morning, before the heat came. I liked to stay out to watch the sun rise over the Whispering Peaks and illuminate their jagged edges. I sat in the silence of the night and closed my eyes, letting my ears twitch to follow the murmur of the wind. I inhaled the cool night air, ignoring my cramping stomach; the minerals that we managed to dig up in the Valley consisted heavily of cadmium and aluminum, not the most appetizing substances.

Suddenly my eyes flew open, nostrils twitching. Was that…? No, it couldn’t be. A strange scent drifted up to my nose. I stood and tucked my wings close to my side, scanning the rocky field. That smells like a human. By the stars, if one of those fleshy monsters would dare to approach my clan’s den I’d rip them apart limb by limb.

My eyes caught movement, and I could feel a growl rising in my throat. Indeed, something small was coming my way. I lowered my head and stalked off of my perch towards the creature. I crept closer, and my anger seethed as its scent became clear. It was most definitely a human. With all the self-control I could muster, I kept my fire down; it would be able to see the glow of my chest if I beckoned forth a flame.

I made another quick scan of the field, making sure there was only one human. It seemed strange for it to be alone, as they had come in such great numbers back at the fortress.

I was soon close enough to hear its breathing, and it sounded like it was panting quite heavily. It had a tired stumble to its step, and I wondered how long it had been walking.

Had it come all the way from the mountains? What is it doing in the Valley?

I couldn’t restrain myself any longer. I lunged at the human with a snarl, feeling my chest become hot as my internal flames began to crawl up my throat. The human let out a shrill scream, and I could feel it tremble as I pinned it down with my talons. I grinned as I drank in its fear, glaring down into its large, terrified eyes.

Light spilled into the Valley as the sun crept over the mountains, and both the human and I were illuminated. The little monster had a mop of sandy-brown hair, and was clothed in a green tunic and gray pants. His tanned skin was soft and youthful, blemished by a pale scar across his left cheek.

I had almost forgotten how ugly these creatures were.

Hearing a human’s voice again only fueled my rage. I remembered how they had jeered at us, calling us “vile” and “wretched.” The flame reached the back of my mouth, and I licked my lips at the charcoal taste that it brought with it. While searing this human to a crisp certainly wouldn’t change anything, it would certainly be a pleasant experience.

But, surprisingly, I found myself hesitating. What is he doing all the way out here? The thought bothered me terribly, and I reluctantly let my flames die away, releasing a sigh of smoke into the air.

I felt the human exhale a shuddering breath.

“Tell me, little worm,” I hissed, “What brings you to trek across such foreboding terrain?” I exaggerated my jaw movements as I spoke, making sure he got a good look at my glistening fangs.

The human blundered for the first few words, and I growled impatiently. What he sputtered out next, however, was something I thought I would never hear escape from a human’s mouth.

I blinked, stunned for a moment. Was this some kind of trick?

I scoffed. Ha! Foolish creature, to think a dragon could so easily be outwitted. I swished my tail in annoyance. Then again, he doesn’t look armed. What harm could he bring to me, a beast twice his size? Perhaps I should humor his request.

I contemplated my next move, chest still warm with the raging desire to burn off his face. Nevertheless, my curiosity was growing to be quite unbearable. With some hesitation, I lifted my talons from his chest and stepped back. I pinned my ears, muscles tense, as he stumbled to his feet. It was impressive how these creatures managed to stay balanced on their two spindly legs.

“My name is Calian. I have come from the Kingdom of Bayne, on the other side of the Whispering Peaks,” the human explained, voice still quivering. “Bayne is under attack. There is much to explain.”

“Well then you’d better hurry,” I hissed. “The sun has risen. Its heat will soon follow.”

The human’s hands fiddled with his belt as he continued. “Goblins have come down from the mountains, and have been raiding our villages. The attacks started a few years ago, but are only now becoming concerning. We are nervous that an invasion may soon take place. When I discovered that you dragons no longer reside in your mountain home, I journeyed here seeking your aid.”

I rolled my glistening eyes, tongue flicking out between my teeth. “And why should we even consider helping your kind, when you so savagely forced us from our home?”

“But you must understand, that was not Bayne!” Calian cried. “Those who now occupy the mountain fortress are from the Kingdom of Malvado.”

My head cocked to the side in interest. There was more than one human kingdom? How interesting. Still, this hardly changed my attitude towards the vile creatures.

“I suspect it is their presence at the fortress which is causing the goblins to flee from their nest, which lies deep within the mountains.”

“So what is it that you are proposing?” I urged, the scales along my back beginning to grow warm from the sun’s bright rays.

Calian’s scared eyes locked with mine. “I am proposing a truce. If you dragons help Bayne rid our lands of the goblins, then we will in turn offer our services in reclaiming your home.”

I flicked my tail. Dragons and humans united? What a foolish idea. And yet, a small part of my heart leapt at the thought of home. I imagined what it would be like to return to our mountain fortress, after five years of treacherous exile. To once again be surrounded by lush vegetation, flowing springs of water, and to feel the cool mountain air rushing past my wings. However, doubt still clouded my thoughts. This could all be a part of some nasty human scheme, though how, I could not figure out.

“You are brave to journey out here, little human,” I said, grinning as he flinched at my voice. “But what makes you so confident that you could help us get back our mountain fortress?”

For the first time, Calian actually seemed to gain some confidence. He revealed a small, leather pouch that had been tucked away in a pocket and held it up for me to view. With a hint of a smile, he declared, “Because, mighty dragon, I know a secret.”

Author, artist and horse girl. Just published my first book on amazon The Spade Trilogy: Rise of Nerizza! Writing has been a passion of mine since I was little and my favorite genre is fantasy.

More stories from Lin Corey and writers in Fiction and other communities.