You'll be better off 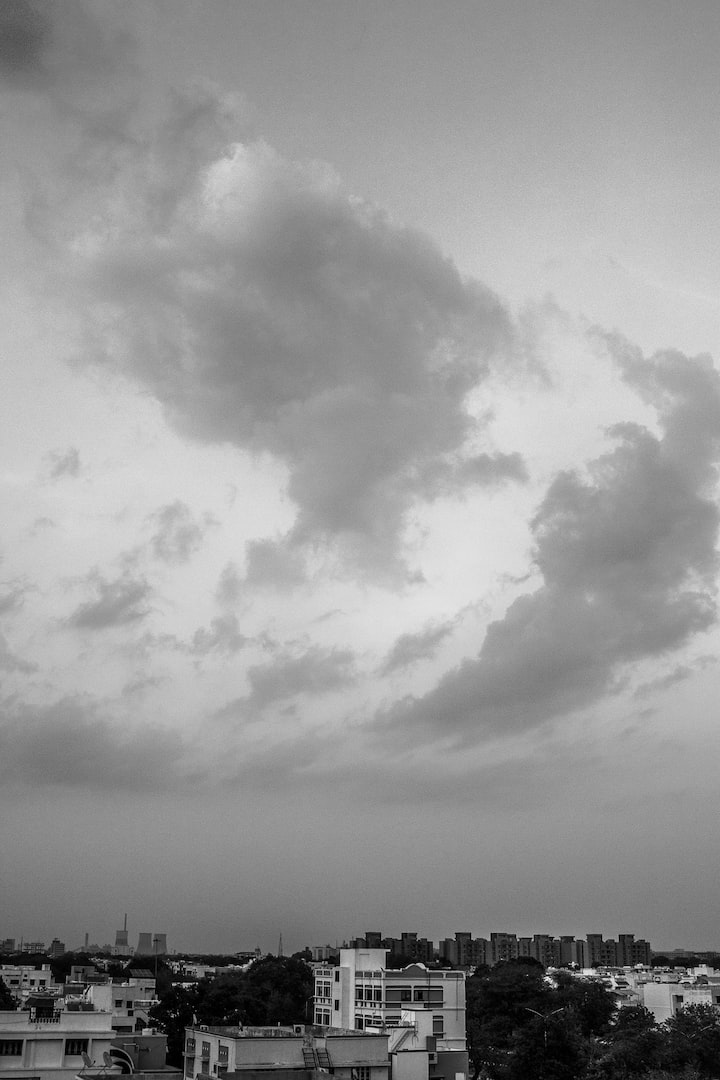 The birds hadn’t even woken up yet. Somewhere beyond the clouds, the sun had to be rising. But for now, all the sky held was grey or black. It was a great day to exist. You know, one of those days where that’s all there is to do, exist.

I was just setting out to go to work, locking the door and that, when footsteps started coming up my driveway. Nobody has ever walked up my driveway. I turned around. A delivery person of sorts was holding a shoebox sized box out to my chest at arms length.

Like I said, nobody ever walks up my driveway, and I was caught off guard. I hadn’t even had the chance to clear my throat or practice my greetings and farewells in the car yet. I hadn’t decided whether I’d say “how are you” or “how’s it going” to my coworker yet, let alone someone I didn’t know. Knowing me, I’d likely say both: “how are you going”.

My body wasn’t ready, so I nodded and must’ve grunted too. The delivery person thrusted the package towards me and I wanted so desperately to recoil, but my fingers reached out to it.

It belonged to me after all, right? Why wouldn’t I take it? Why on earth would I be hesitant?

The delivery person rolled her eyes and sighed at my slowness. I panicked.

She shrugged and pushed it to me again.

Take it, dumbass. It’s yours, not hers.

As soon as she handed the package to me, it’s weight nearly threw me onto my face. I stumbled to catch myself and strained against the world to just keep from crumpling under the package. The delivery person frowned at me.

“You alright?” She asked.

“Yeah, I’m good. See ya.” I said as I turned around and struggled to open the door.

I could still feel her critical eyes on my back as I stepped through the doorway back into my home. The entrance was spinning about me. I could hardly manage to keep upright. The box had to be put down. My back gave out and I dropped it on the stairs, but it bounced, hardly matching the supposed characteristics of its weight.

How had she carried it so easily?

I jumped, clutching my chest as Leia came down from upstairs. She walked so quietly, or she was there the whole time, I couldn’t tell. All she was doing was glaring at me.

“You’re sweating.” She pointed out.

Apparently I was. I straightened myself out and tried my best to laugh.

“Yeah, yeah I was just… running… from the neighbours dog.”

Leia just held that glare, those critical all knowing eyes that want nothing but to know even more than they should. She saw through everything.

“I didn’t know you ordered anything.”

She spoke to me like a stranger. The room stopped spinning altogether, but I no longer recognized the walls. I retreated into my skin as far as I could.

She was coming down the stairs now, and reaching for the box.

Leia picked it up with one hand, without effort at all, and flipped it in her hands, inspecting all sides of the box. I must’ve looked stupid just sitting there and staring at her, because she tossed the box to me and flipped her chin up. The box nearly crushed my chest. My legs wobbled.

She turned her back to me, leaving me under the impossible weight of the box. As I put the box down, I caught the time on my watch. I was already late for work, somehow, but I couldn’t bring myself to get up. My hands were glued to the box, my knees trapped on the floor.

My body wanted nothing more than to curl around the box and stay there, to die there. Maybe climb inside and hide. Leia’s voice dragged me to my feet but not to my senses.

I blinked and found myself behind the wheel, blinked again and was in front of a classroom of kids who didn’t want to be there, blinked again and was sitting eating lunch with my coworkers. My body moved but my mind remained on the box at home. Who was it from? Why was it there? What was in it? Why was it so heavy? How could Leia handle it so easily? The questions never stopped, and there were no answers.

The lights above buzzed violently, their piercing rays cutting into my eyes as I stared forward. The room stretching further and further, endlessly. Not even the sky understood the length of the room. A body walked in front of me.

“What’s the matter with you, eh? Deep in thought, are you?” The body said.

My eyes couldn’t stand the effort of lifting to meet the head which belonged to the body.

There was a brief silence, then a hand came to my shoulder, gently.

I remembered the path of least resistance.

“Keep your chin up, man. Let me know if you need anything.”

I was left alone then. My eyes shut and I was back in the classroom, teaching something I pretended to know about, I blinked again and I was driving, screaming or crying I can’t remember. Then I was at my front door, and I knew what awaited me beyond it.

My hands shook as I fumbled with the keys. My legs were already failing me just thinking about the box. Leia opened the door, a faint smile flashed across her face, a shadow of something I had once known so long ago, something so familiar but so unbelievably foreign now.

All traces of her smile vanished as soon as I spoke, and I looked at the floor as I came into the house, all to aware of the box that still waited for me on the stairs, all too aware of the paradox of our relationship. The ground dropped out from under me as Leia spoke of her day, telling me about everything under the sun. It’s not that I didn’t care to hear what she had to say, but that box still lurked no matter how I thought of it, obscuring everything like the clouds do the sky.

I wanted to scream, to fall into a coma, to fight someone, to be pummelled, to do everything but nothing at once. My brain ran a million miles a minute and went nowhere. Leila was staring at me with that glare. She touched my face and my body wanted so desperately to pull away, but I knew it would hurt her, so I stayed, I winced. She pulled her hand back, hesitating.

I gave her a kiss, supposedly out of passion but likely due to obligation. She pulled away from me but she told me she loved me. I never found out if she was lying. Her retreat from my presence bore heavy on my mind as my eyes turned to the box. Was she only here because she pitied me? Does she want to be here? Do I want to be here?

Leia’s eyes burnt holes in my spine as I turned away and tried to drag the box upstairs. It was heavier than I remembered, but it wasn’t Leia’s responsibility to carry it. My name was on the box after all. Carrying its weight, each step I took felt like miles of effort. To bring my foot forward an inch was to move a mountain, but I couldn’t stand Leia’s eyes any longer. There was nothing to do but escape.

I dropped the box on my bed and stared at it, contemplating whether or not it was worth opening. It pulled the world into itself: a void, an impossibility. Curiosity got the best of me, and I found myself struggling to move my body even when free from the weight of the box. My fingers didn’t have the strength to hold the knife. I must’ve collapsed from the effort because the next thing I remember is Leia cussing me out and pulling my body up off the floor and onto the bed.

The night was old, or young, by the time I opened my eyes, and Leia lay sleeping beside me, or pretending to. I was still in my daily clothes, but I hadn’t the energy to get changed or let alone move from where I lay. I shifted my head and came face to face with the outline of the box on the ground. It was all I could see, all I could think about.

An eternity or an hour could have passed as I lay in that bed. I couldn’t tell. I couldn’t care. Leia still looked at me in a way I couldn’t pin down, work called until my phone died and the only reason why I pulled myself out of bed was because I couldn’t bear to look at the box any longer. So I walked.

I sat on a bench overlooking the bog below, lightly obscured by an early fog, with a view of the mountains across the river beyond. This place once had meaning to me, this bench, and this was clear because the memory of it was clear. But as I watched the wind carry the fog over the valley, I found myself desperately trying to feel this sense of meaning again. It never came.

“I know that look.” Someone said beside me.

I flinched at the sudden break of silence and wondered at my inability to detect the presence of the withered man who sat beside me on the bench, cigarette in hand, legs crossed, a cane laying across his lap. Whoever the bastard was, I wasn’t in much of a state to talk, so I didn’t. I watched the fog. He rolled the cigarette around between his fingers and sighed.

How could he know?

I dared not to forfeit any sign of discomfort. The old man continued through clouds of smoke.

“The weight will never go away completely. It hasn’t yet, at least. But at least you’ll know what to do when it gets unbearable.”

I turned a slow eye to the old man, but he was gone, as if he had never been there to start with. Flipping and turning my head, jumping out of my seat, there was no trace that I had ever had company. The air was sharp. I knew what I had to do, and I cast one reaching glance back over the bog to the mountains so far away before I headed back home.

My heart raced, or stopped beating entirely, and I didn’t even take note if Leia was home or not when I got through the door. The box was exactly where I left it, precisely where I didn’t want it. I didn’t want it at all, but I had to see what was inside. Several times I nearly backed out.

What else is there to do?

The blade cut through the tape and I tore the box open. A laugh boiled up in my chest, not because anything was funny, but because it was empty. And just as the old man said, it wasn’t any lighter than when I first held it. But I knew now, and although it riddled me with madness, I did find some peace in it that I wouldn’t have known if I left it unopened.

More stories from Matthew Cheng and writers in Fiction and other communities.