by R.M. Marsh 4 months ago in Fantasy
Report Story 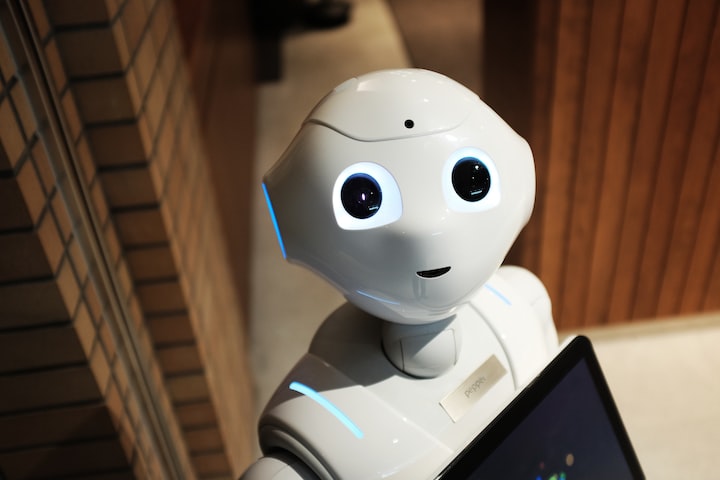 Passengers turned their heads and peaked over from various seats littered around the train carriage. Their eyes glistened with mixtures of confusion, curiosity and fear for they had never seen a sight quite like it.

Unconscious, alone, alienated within a seat, a creature had appeared, seemingly out of thin air. Its skin glistened with moisture and had a different texture to anything they’d ever seen. From the top of its head hung thin strands of pointless wires that connected to nothing.

What was it? And just how did it get there?

A small metal child approached the being and poked at it. Its finger made a gentle impression on the skin of the human’s cheek. The human’s eyelid snapped open. The child backed away in fear, unused to this new kind of material the person was made of.

Clanking noises echoed down the train carriage as a large droid waded its way through crowds of curious passengers that had begun to gather to gain a view, creating crowds up the central aisle. The clanking of the large droid’s metal feet reached an end when it arrived next to the human. The human looked up at the droid then around the place slightly startled as it became aware that this wasn’t a dream but in fact some distorted, different version of reality. The human leaned back when the droid lowered its face to his level.

The droid examined the human with glowing yellow eyes before opening its mouth, exposing a dark internal tunnel of rotating cogs and wires that sparked gently inside it. Metal gears grinded together as its bionic throat spoke in an unidentifiable form of robotic speech: “chli chla cor, cho ki.”

The human responded by pointing at itself and uttering the words “human”. The robot attempted to replicate human speech but without luck. The human stood up and manoeuvred around the large droid before breaking into a sprint down the length of the carriage. Metallic heads with glowing headlights for eyes all followed him with their gazes all staring at the bizarre meat creature as it progressed its way down the length of the train.

He ran on & on, bursting through one carriage door into the next and so on. He looked around dazed and distressed. Outside the window was a view unlike anything on earth. It looked like some sort of sick minded amusement park where the train tracks twisted about beyond normal comprehension all while remaining dangerously on the outskirts of glowing geysers of hot lava. The track itself seemed to move shakily like the slithering body of a snake, swerving itself accordingly to avoid the spits of lava that frequently shot out from hell holes in the rocky ground of the terrain that the train journeyed through.

He snapped out of it and continued running. He unlocked the next door and continued through the next carriage, turning many more heads on his way. On one of the passenger’s laps a robotic dog barked at him, but its bark sounded more like the creaking movement of a large metal crane. The train started to tilt slightly and the man was pushed backwards and down onto the floor by the sheer force of the increase in speed.

Every robot onboard was seemingly unaffected by matters such as this as they were all magnetically attached to their seats.

The human grabbed hold of the side of a chair and raised himself back up to his feet. Ahead of him was one last door. He went through it and entered a massive engine room that increased in height and size significantly to the rest of the train.

Ahead of him a large bulky droid was shovelling fuel into a flame, but this fuel wasn’t coal. The man heard a cry from above him. In a net hanging from the ceiling were bundled piles of human bodies all other humans all crammed on top of eachother. The man looked back down towards the engine hatch. He heard a scream and saw a burning hand reaching out from the small flaming entry hole for the fuel hatch.

The large robot slammed the fire hatch door shut, silencing the room. It turned round to get some more fuel only to see a small human who wasn’t in its net. The robot spun its large shovel around in the air and raised it to attack. The man narrowly avoided being swatted as the square of metal, the size of a table, slammed into the ground where he was standing mere moments ago.

The train picked up more speed as the engine ate up its latest insert of fuel just as it reached a curve in the tracks. The increase and turn of the train sent the man tumbling across the floor in a disorientated fashion, while the large droid remained magnetically attached to the ground. The man slammed against the side wall and caught sight through a small opening of the tracks ahead. They seemed to reach what looked like a dead end into nothingness.

He got up and ran towards what he hoped were the breaks. The large robot swept its gigantic shovel sideways, across the floor towards the man in an attempt to crush him against the wall. The man had to diverge his route and ran back towards the wall. As the flat head of the shovel drew close he jumped up and kicked off the wall which enabled him to bounce backwards over the large slate of metal. Whilst mid-bound, he twisted around and landed on the ground.

He turned and saw the handle bar for the break and ran towards it. Just as his hands were fingers hovered around the handle it suddenly became further away as he was flung backwards through the air as the train had pivoted into a vertical drop. The train was going down the surface of a cliff, still on track (but as I said before the tracks were a bit incomprehensible).

As the train went on its downwards descent, the tracks (which moved almost organically like a snake) began to twist like it was coiling into a giant spring. None of the passengers or robotic crew on board the train were affected by gravity as they were all connected magnetically to the seating and the floor surfaces of the train. But for the human he was like a piece of grain caught in a whirlwind and because of this he kept whizzing around at uncontrollable speed like an irritating insect, while the droid kept attempting to swat him with the shovel with no success.

He reached out with his arms and eventually his hand grabbed onto another hand like his own. He felt other hands against his body pull him in towards the net of trapped humans on the ceiling. Earlier he thought them to all be dead, but realised they were just underfed and as miserable looking as anyone was who knew they were only destined to be chucked into a furnace. He clawed at the netting but it was no use. The rope had the toughness of a thick metal cable.

The robot had finally seen where the man was and swung for him. The man pushed himself down from the ceiling, fighting the gravity by leaping down over the shovel before crashing back up into the net and heabutting someone through it.

The robot swung so hard that the weight of the shovel continued its arc all the way round until it smashed into a section of important looking machinery behind it. The smashing of machinery sent out a distress call that sounded like a high-pitched whistling noise. The man cradled both his ears as did the people lying in the hanging net. The large droid that formerly approached the man earlier slammed the door open and entered the room.

The droid saw what was going on and reached up to wrench the man off from the netting. But he rolled out of the way and down the side walls as gravity shifted with the spiralling of the train’s twisty train tracks playing with gravity.

As the train continued to twist around while going downwards, he finally steadied himself and found that he could suspend himself mid-air for a prolonged amount of time. He positioned himself in between the two large robots. The robot engineer with the shovel swung for him while the other droid moved in to grab him. The man managed to dart out of the way at the very last moment, so the two droids collided with such force it rattled the entire carriage and they were both incapacitated.

Meanwhile the man flew straight towards the area of machinery that was obliterated by the shovel swinging for him earlier. Many menacing shards of metal protruded from the damaged machine. He grabbed onto the edges of one, attempting to dislodge it so he could arm himself with a dagger. Just as he tightened his grip around it, he found the train’s gravity was once again on his side and twisted upside down so he suspended his full weight from the shard of metal he hung from, and it dislodged with ease before sending him on his way up towards the netted ceiling.

He grabbed hold of the netting and looked through into the mass of bodies all staring at him with tears of joy. He sliced through the various overlapping areas of cable netting.

He pressed the shard of metal against a final area of overlapping rope, after a few moments of tension and sawing at it back and forth, it sliced through and he set them free.

But now upon being released from their confines while still aboard a train, in a world full of incinerating lava… Was it a freedom even worth having?

More stories from R.M. Marsh and writers in Fiction and other communities.