by Kyle Smith 2 months ago in Short Story

And Joel’s Worst day ever. 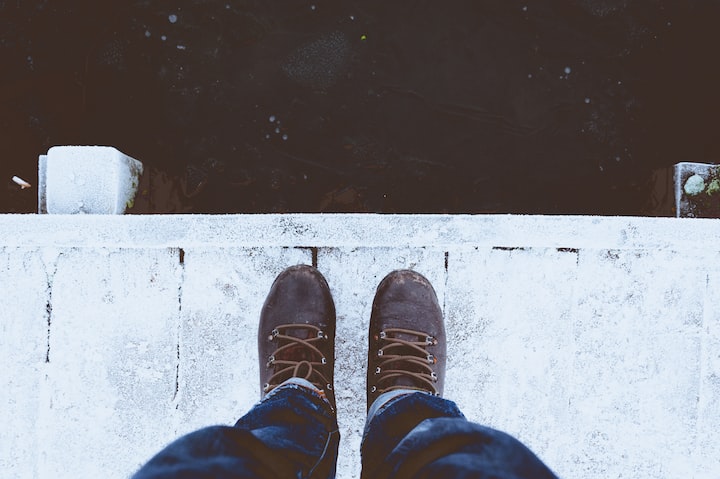 Photo by Ian Robinson on Unsplash

It was a cold night in the middle of dead winter. Two 12 year old boys were throwing snowballs at each other outside and enjoying their fridges tempratures outside. The entire state of Alabama was experiencing colder than normal weather this season as roads were closed and most homes were left without electricity. It was considered the coldest on recorded according to a local news meteorologist. Everyone was suffering as warming centers were opening up and temperatures drop to the teens.

Two boys Jacob and Joel, were playing outside of their ranch house because the power was off. Momma was inside sitting in her wooden rocking chair wrapped around in a thick blanket listneing to any impending updates regarding the blistered that rammed through town and surrounding counties.

“Hey Jacob, I wanna show you something cool, follow me” Joel yelled from a distance.

“It’s in the the woods, but you gotta see it, I promise you, it’s cool” He also shouted. So the boys went through th the woods behind the house and found a frozen pond lurking on a flat grassy terrain.

”Dude, wait, how did you know there was a pond here?”

”Remeber when you’re playing League Of Legends at home with Phillip? Well, I come out here to fish”

So the two get closer to the frozen pond and Jacob gets a bad idea as he stares at a glaring reflection of himself Looking down at he sheet of ice below him. “Dude, i think this is good enough to ski on” Jacob said foolishly as he begins to step on the thin sheet of ice. ”I bet it’s just like that Bambi Movie we seen on Disney Plus the other day, where we can just slide on the ice” Jacob said laughing.He places two feet on the frozen pond as the thin sheet of ices collapses below Jacobs as he quickly begins to sink.

”Help!” Jacob fearfully screams as his entire body gets immersed in cold murky pond water. Jacob instantly panics and starts to yell for help. Jacob is peddling inside of the frozen whole scared for his life as he tries to get out but struggles. Hyperfermia begins to settle in on Jacob as the 12 year old tried to maintain air.

Joel runs to Jacob’s hourse frantically as he burstes inside of the dance house with stiff frost bitten knockles and red cheeks and nose.

“Mrs. Bonned, Ja-JACOB! Fell inside of the frozen pond!” He exclaimed to Jacob’s mother. “You fucking rascals,I TOLD ya NOT to go near THAT DAMN POND, HOW IN THE FUCK DID THIS HAPPEN?” Mrs. Bonned Snapped at Joel as the boy beganned to sniffle and cry.

”I don’t know, I just wanted to show him where the pond I go to was, that’s all, and then Jacob thought he could ski across the pond like on Bambi and then when he did, he fell in the ice and -an-and- he-h- sti-sti- still there!” Joel started to cry frantically,

Bonned dialed The EMT with her smartphone that didn’t have much reception as most power lines were out. Boned shoed Joel out of the house as she was on the phone with the EMT and describe what had happened according to the view of Joel.

Walking with a stretcher and equipment to break hard surfaces like thin ice, The EMT and The Fire department ran towards the pond to break Jacob out of the ice he fell from. When they finally got him out, he was unconsious and not breathing. So the EMT placed Jacob inside of the ambulance to perform CPR on Jacob to no success thought out the ride to the nearby hospital. Pedimedics kept pushing and breathing through Jacob‘s mouth and yet he remained lifeless On the stretcher. One EMT Pedimedic checked Jacob’s pulsed and announced that he was officially dead. Tears of sadness begin to run down Joel’s eyes as he partially felt guilty for allowing his neighbor and friend to attept to stop him from making a stupid desicsion that was life threatening.

I’m sorry kid and Bonned, Jacob is gone, Bonned started to manically cry as she angry yelled at Joel, threatening to sue him and gaslighting him into influencing her son to slide on the ice. “Look here you bastard, imma sue your mamma and your daddy until you fuckers on on the streets for KILLING my son” She said bitterly as she sopped her tears inside of the ambulance truck. “Jus-Just Wait sand see, you little fucker!” As Mrs. Bonned begin to share at Joel. The EMT Staff held her back and placed her on the wall so she wouldn’t abuse a child in front of a public servant.

It was a sad day for Mrs. Bonned and for Joel, who sat at the hospital waiting for his parents to pick him up from the emergency room. Jacob’s lifeless body was placed in a body bag and sent to the coroners section of the hospital. Joel couldn’t believe his neighbor who he played games and did stuff outside with, was dead. He was in shocked and scared that Mrs. Bonned would place the blame on him and his family for Jacob’s death.Later that day, Joel sat silently in his dark bedroom cold and shivering but starring at the plaided wall as no electricity was serviced during the bitter cold blister. He pondered what he could of done ot save Jacob and felt enternally guilty for not doing much of anything.

So Joel Starred outside of the bedroom window and cried himself to sleep among that cruel, cold and bitter Alabama evening, all alone in his bed.Then suddenly Joel heard Jacob call him to the pond.Joel follow the voice all the way to the frozen pond where the tragedy happened.

In the pond was a swimming rabbit paddling around the area of a cracked ice. Once the rabbit noticed Joel, he jumped right inside of the cracked ice hole where Jacob was found. Saul Joel ran, jumped into the hole where Jacob was because he thought he was in a dream, and trapped him self Inside the thin layer of ice. A sudden force suctioned Joel into a bright light within the pond and once he hit rock bottom of the murky waters, he popped out on the other side of the pond into another dimension.In this dimension, Once Joel was on the other side of the pond, he noticed it was daylight here.What was weird about this place, was there was no snow in the water was nice fresh and warm. He walked out of the lake of which he came from through the suction of the light at the bottom of the ice hole in his world and entered into this one. From a distance, he saw Jacob shivering and crying, so he ran to him.

“Jake it’s me! “Joe said and allow voice at a distance as he was running towards Jacob.

“What in the hell is going on I am so scared “Jacob said shaking with fear. Joel looked at him and replied “ dude we thought you were dead, that wasn’t you that they dragged out of the thin ice hole? “

“No? I was here the whole time” Jacob said with a devilish smirk on his face.”Then why was your body discovered in frozen ice” Jacob instantly shifted into a snake that then swallowed Joel as a slivered away.Joel’s body was being chewed as his soul was being sucked out of the flesh. The snake then spit his body back out into the lake where his body got suction right back on the other side the light in into the frozen pond. Joel’s old body floated above the thin ice as his actual soul was transported to a shape shifting snake.

Snakes shap shifted two heads, one was Jacob up and the other was Joel. Together, they lived in this other dimension underneath the thin layered iced pond as they slivered up trees, branches and ate the one - Eyed bugged creatures that got in there way.Joel’s new dimension was strange because everyone or everything shapeshifted. The boys were not really dead, their souls were just sucked into a snake in a new dimension where everything shape shifts.