by Mariann Carroll 2 months ago in Adventure
Report Story

The Candyman Did It by Mariann Carroll 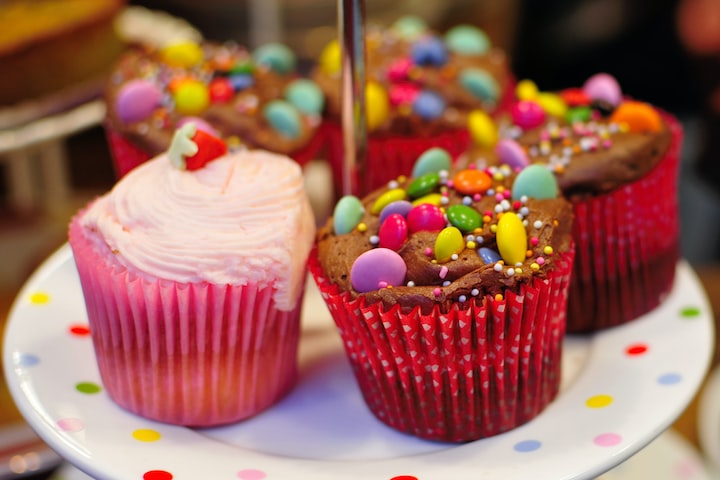 The Candyman was at it again. He was offering people candy cupcakes at the bullet train station number 15. No one can resist the temptation especially the kind looking smile the Candyman was giving everyone. No one suspected the man in white suit with candy printed on it, four feet tall was having a bad intentions when offering everyone a Candy cupcakes.

Everyone at the stations was all smiles and happy accepting the cupcakes.

One bite of the Candyman’s cupcakes and everyone fell asleep. Candyman had all his pet dragons put the sleeping people into the bullet train of the century.

“Boss what are you going to do with all these people on the train.” asked one of the dragons pet.

“ We are going to run away with them and held them hostage to catch the dragon squad and make dragon squad my slaves. I will rule the world .” Candyman said laughing while holding his cane made out of candy, high above his head.

Meanwhile at the Dragon Squad’s cave, the red alert alarm went off.

“What is happening ? “ Teal dragon asked.

“It looks like, Candyman had manipulated people to eat his sleeping Candycupcakes. He also loaded then in a runaway speed train. We need to save them but first we need a plan.” Big Daddy told his Dragon Squad.

“ First we need to try to control the engine. If we cannot do that, we need to separate the carriages from the engine and that’s how we will save them.” Red dragon suggested.

“I know, why don’t we put Candyman’s dragons to sleep with our dragon sleeping air gas? We will wear our gas mask so we don’t fall asleep as well.” Orange dragon shared his idea with the squad.

“This sound like a good plan dragon squad, let’s do this!” Pink dragon said with excitement.

The Dragon Squad finally reach Train number 15 speeding down the tracks to the broken bridge.

“Dragon Squad , you must hurry, the train is heading to a broken bridge, I don’t think Candyman was aware this train do a detour while the train track was being fix on the bridge. ” Big Daddy warn Dragon Squad.

Big Daddy is the Commando of the Dragon Squad.

“ Dragon Squad send your tiny spy dragon cam to check the people in the train.” Big Daddy commanded from the dragon cave.

“ I am on it Big Daddy!” Pink dragon responded, releasing the tiny one inch dragon gadget into the window of the train.

The tiny dragon gadget flew thru the carriages full of people still sleeping unaware their life is in danger.

“ Looks like the people are still sleeping.” Pink dragon said using the connection glasses to the spy dragon cam .

The Candyman finally was alerted to the Dragon Squad flying above his train.

“ Capture the Dragon Squad and bring them to me !” Candyman shouted his command to his slave dragons under his hypnotic controlled.

The tiny spy dragon made it to the engine of the train where Candyman was controlling the train . The dragon spy cam zero in on, Candyman using a hypnotic device that was controlling his slaves dragons wearing blinking blue light devices near their ears.

“ Our sleeping gas will not work on these dragons, we must get the hypnotic device from Candyman. Let’s go Dragon Squad !” Red dragon told the squad.

The train was fast approaching the broken bridge.

“ You want to save these people, Dragon Squad ? Surrender yourselves to me and be my slaves.” Candyman told the Dragon Squad.

Dragon Squad stop the train in time to save the people but not Candyman. The engine was dangling off the broken bridge and Candyman fell out and landed in the rapid water below.

The people are gaining consciousness from their slumber. They are surprised to see themselves on a train and wonder how they got there.

The Dragon Squad explain what happen and have the hypnotic dragons bring the people back to safety.

Once again the Dragon Squad save the day. This runaway speed train never pass this Dragon Squad.