Portrait of a Thursday 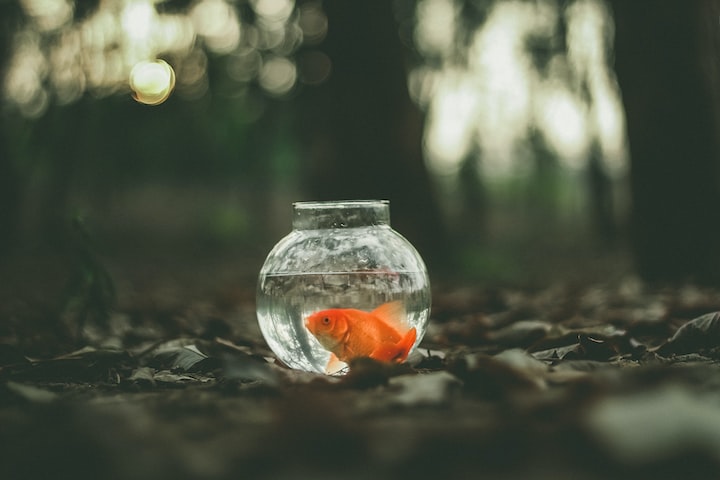 Photo by Ahmed Zayan on Unsplash

A dull SPLASH followed by a gush of water as Bill dived into the large coral reef tank of the aquarium. He then gently submerged himself closer to the bottom of the 25 feet depth over to the sandy lagoon inhabited by the most hauntingly beautiful giant rays as he felt his body temperature slowly drop.

Every morning he would think to himself, how can this cold make him feel so warm. He would then wonder when exactly the smell of sweat, oil and seawater made him reminisce about the smell of his grandmother's sweet baking. He was always happier underwater. Though he would dare use the word “happy”. He could spend days and hours if he knew his skin could handle being in water. He knew he didn’t only like the jarring almost silent sound underwater- he needed it, he lived for it. It was more than escape for him; it gave him purpose.

He never wanted to become one of the colorful fish or a giant whale, or a friendly dolphin. He didn’t want to become a merman and chase after a mermaid. He never fantasized about being underwater. His expectations of being wet were as real as his aspirations in his life when he was dry. Ironically he found the man built, artificial 200,000 gallon tank to be less superficial than anything outside of it. It never made sense to him and he didn’t need it to.

It would take him five minutes to clean the glass and another ten minutes to feed the fish everyday. Though he also welcomed guests of the aquarium, mostly kids, for a thirty minute separate session, he just never could bring himself to enjoy that part. So, he would only count the time he got to spend alone underwater. He would often joke to friends saying that his fifteen minutes underwater everyday is his fifteen minutes of fame. Such a shame he would think to himself that he only got to do it six days out of the week and not seven.

He was expected to get out of the tank in between his solo feedings and the guest sessions so he would usually grab his effortless home packed lunch and go sit outside at the aquariums observation deck overlooking the Bay hoping to spot a whale. He would spot a whale every now and then, more often dolphins but everyday he would find himself watching birds fight each other for food. He would feel sorry for the birds, for all birds matter of fact. Most couldn’t swim and diving didn’t count. He never envied flying, he also didn’t like birds. He got attacked by a seagull once at age six, then got bit by a chicken at age seven and finally got pooped on by a crow at age eight. In his defense he gave the species three chances and they all blew it.

His friends would joke about Bill and the birds often.

On this Thursday he saw a little sparrow and for the first time he was not repulsed by it. He found himself enjoying watching it wander around. Maybe today is the day he thought to himself.

That afternoon he looked as he always did over at the audience from behind the glass inside the tank. He was grateful for the distance. He waved at them as he was expected to do so.

As the session ended he started to swim his way back up to the open gate of the tank. He felt heavier than usual. It was almost as if his body quadrupled in its weight and was pulling him down. As soon as he made it to the top, he removed his oxygen. Then, instead of getting out, he let himself go. As he calmly submerged back into the water he felt like he was being hugged. For a couple of beats he let it be.

He was sure he stopped time at that moment. And time was more valuable than money and therefore just for that moment in time, without the perception of time, he was the richest man in the world.

Similar to waking up from a sweet slumber, his reality came back to him and he quickly swam back to the top as he felt he was almost out of breath.

Later that night at home, he didn’t turn on the TV, nor did he open a playlist of his usual songs. Instead he opted in to listen to an old Vinyl record of one of his dad's favorite bands from the 60s as he sipped through a whole six pack of beer, taking his time one by one, while slurping through his favorite generic cup of ramen, actually two of them because one was never enough.

With the familiar background music, he went ahead and wrapped an expensive bottle of Japanese whiskey and then went on and taped on a note to a large tin of a store bought Sicilian panettone. For a moment he was proud, he smiled looking over at the gifts and slowly walked away.

He went into his bedroom and sat on his bed. He opened the top drawer of his night stand and in the dim light searched through the mess with his hands. He then pulled out a gun and placed it on the nightstand where a photo of him with his late wife and two kids stood. He found the bullets he was looking for and loaded his gun, all so patiently and gently. He turned off the light and exited the bedroom, knowing this was the last time he would be in that room.

How cliche he thought, the way it all happened, how ordinary and how uncreative will be the way he decides to leave. But he knew that among everything that he was told was real and had to make sense, this was the only thing that actually made him feel real. And “so beat it” he thought, “we all eventually have to go”.

He sat down on the large armchair overlooking the backyard and placed the gun under his chin. Just when he was about to pull the trigger, he glanced at the corner and saw his goldfish in a fish bowl.

“Stupid, stupid, stupid” he repeated to himself as he lowered his gun. How could he forgotten about the fish? Looking at the fish he could almost swear that his fish looked at him, desperately wanting him to hold on to life as its own life depended on his survival.

He quietly put his gun down as he walked over to the bowl. He then grabbed the fish bowl and held it tight, and sat back down on the armchair.

For the rest of that night Bill told his fondest memories to the fish as they both watched over the night sky looking down on the yard once Bill played with his two daughters and their dogs. In the moments that blurred with remembrance he would go silent and think to himself: if his fish envied him for being able to breathe out of water or if it felt sorry for him for being outside of a bowl?

The next morning Bill woke up early and drove to his parents house to give them their gifts he wrapped the night before. He decided to keep the note on the cake as the note was out of his heart. That whole day, he spent it with loved ones and at night, he dreamt about the tank in the aquarium in his sleep.

Saturday morning, the beginning of his week, he would start all over again.

More stories from Arsal Asal and writers in Fiction and other communities.