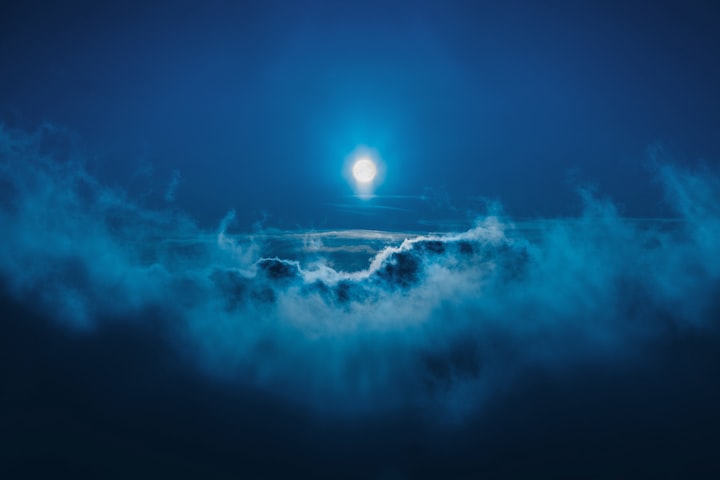 Photo by Luca Bravo on Unsplash

Peter held out his belt and the spider coin was glowing. Sarah looked at it and closed her eyes in fear. The last time it shone so bright was when the wendigo was near. Sarah jumped out of bed and began to prepare herself for what ever was to come.

"Go and wake up Marcus and Mary" She said to the boy as she began to gather her clothes.

Wolves howled through the trees and Sarah shivered as she listened to them. Quickly, she dressed and her quiver stationed itself on her back. Markus and the boys were dressed and waiting for her to come into the kitchen.

Yeti howls began to sound in the night's air and Sarah began to show signs of fear. She closed her arms around her chest and pulled them tight. The door opened and the shadow of Dragonfly spilled across the floor.

"They are coming. I ran ahead to let you know that Ralph and his troops haven't been able to stop him. Even the wolves have had no success." Dragonfly walked over to Sarah, "I know you are scared, but you are ready. Stand strong Wind Witch. Stand strong."

Sarah took a deep breath and looked at Mary and Markus, "I am only a kid."

"I have seen you do things that no one has done magic like yours. Child or not, you are amazing." said Markus as he walked up to her and lifted her chin. "You've got this little one."

Ralph burst into the cabin, "It is near. The wolves have lost many in their pack. Get ready my girl. Now is your time."

A loud crack rang in the snow covered yard. Jamison and Jacque entered the cabin. "We've lost our lines. We lost two men. The damn thing ate them. Our wands are just no match."

Yeti howls rang through the air. Ralph's fur rustled and fluffed, "It is time for us to go. We will try to hold him back for a while."

The white wall of fur exited the building and the others followed. The door hung open and Sarah stood staring at her fate. She faced the darkness outside and the moon shown, illuminating the figures of her friends as they searched for the signs of the beast. She walked out of the cabin and let her eyes adjust to the light of the moon.

The woods were dark and silvery shimmers of the moon flickered across the snow. Foot steps of others crunched in the snow as they paced and waited with wands in hand. Chavo stood with his spear in his and Sarah marveled at his warriorlike stance. So proud he stood. With a nod of her head, she stood next to him.

"I know you are scared, but just think of all the things he has done to you at the school." Chavo said. "Use your anger to beat the beast."

A stench rose on the wind and a screeching yells rang through the trees. Shapes came from the wood and stood around the magic barrier that surrounded the cabin. Clouds began to form and began to block the light of the moon.

Shining Sun walked up to Sarah, "Child, now is not the time to call in the wind. We need the moon. Calm, take deep breaths like we do in the cabin. Still yourself and push the clouds away."

Sarah took a deep breaths and slowed her breathing. "Be still Sarah," she thought, "be still." said as she closed her eyes and concentrated on her breathing.

She opened her eyes when she heard the yells of the yetis. In the moonlight she could see three of them holding the beast back. Two of the three was Ralph and Tyrone. She watched as locks of fur were ripped off the beasts. The wendigo reeled its blood covered head and bit down on Ralph. Screams, a deep roar rang in Sarah's air as she watched her friend fall to the ground.

Sarah took off for a run, reached over her shoulder and yelled, "Here!" The black arrow flew out of the quiver and into her hand. She skidded to a stop, drew her arrow and let it loose. The arrow flew through the air and struck the wendigo in the chest. The wendigo stopped ripping at Ralph's fur and looked at the arrow sticking out of it's chest.

A dark laugh began to sound from the decaying beast, "You stupid child, you can't stop me!" He tore the arrow from his chest and threw it on top of Ralph's dying body.

Sarah leveled here eyes on the wendigo, "Father Unis, you foul soul." She began to pace, "You have no power here." Her eyes never left the beast as it hovered over her friend. She held out her hand and yelled, "Here!"

"I cannot be destroyed!" Father Unis boasted. "Stupid child, nothing can kill me."

With a smirk, and a warrior's stance, Sarah walked up to the barrier's edge. "You filth, loathsome beast you have become. Rapist of child, abuser of youth, flesh eater of the damned. No longer will you hurt any of my people. I will take you down."

Sarah turned and walked away from the damned creature. She heard it laugh and turned back around at the moment to see it bite into Ralph's neck. Ralph screamed at the pressure of the wendigo's jaws but his fur stopped the sharp teeth from penetrating his veins. Out of frustration the wendigo began to tare the white fur away from Ralph's neck. Sarah stood watching as the wendigo worked to remove the protective fur from her friend. She felt as if she was defeated, she felt fear, and she wanted to run.

The arrow began to pulsate white in the moonlight. Sarah drew in the cold winter's air and felt the sting of the coldness on her lungs. She yelled, "Eugene John Unis" and let the arrow go. As she released the arrow, she sent it flying through the air in a white pulsating light following behind it. Straight and narrow the arrow flew to hit the rotting flesh of the wendigo. A bright flash of light burst in the dark nocking the onlookers down to the ground. The wizards and witches scurried back to their feet as they covered their eyes, as the beast burned to the ground in a fiery blaze. All that was left was the ash from the burnt beast's body leaving a darkened spot on the snow where it stood.

Sarah stood for a moment of disbelief that the beast was gone. Her eyes searched the area for her friends and saw that everyone one was okay except Ralph. Tyrone called the other sentries to Ralph's side. Their cries rang through the woods as they viewed their friend laying on the ground slowly dying. Tears flowed down Sarah's cheek as she watched the others tended to Ralph. She thought, "He cannot die, He cannot die."

Jacque walked up to Sarah, "Child, you are a medicine woman. Look what you have done for me. Let's go and see what you can do for him."

Sarah walked slowly up to her friend and kneeled next to him. She took out her pendant and placed it around her neck. She listened to the others conversation for a moment then she turned her eyes on Ralph. The areas where Ralph's fur was shortened from cutting was exposed gashes of flesh. Tears began to fall again as she turned her eyes to the moon.

"Mother moon, I call you now." she said in pleading tone up to mother moon.

Mother moon heard her cry and emerged through the clouds. The moon began to emit a beam that settled on Sarah. Sarah took a deep breath, removed her gloves and began to run her fingers over the shallow wounds. She found a deep gash that allowed Ralph's blood to flow and stain his white fur. Sarah closed her eyes, focused on Ralph's wound and lowered her finger deep into the wound and slowly pulled it out. She opened her eyes and saw the final seal of the gash from his wound and smiled. Again and again, she proceeded the the next area until all his flesh was no longer bleeding. She raised her eyes to the moon thanking her for helping her to heal her friend.

"Wind Witch, we are going to take him back to the Hovel. He will need time to heal. Thank you, you are an amazing medicine woman." Tyrone attempted a smile and turned to his friends. With their large hands, they lifted their leader and began to carry him off on their shoulders.

Sarah felt a heavy hand on her shoulders, "Come child, the night is done. Let's go inside." Said Jacque smiling down at her.

Verna wrapped Sarah in a blanket and led her to the house. Verna walked her into her room and prepared her for bed. Sarah's head hurt with exhaustion and she didn't fuss as Verna dressed her. Sarah settled herself in her bed and pulled out her black arrows and thanked them as well for protecting her and her friend.

Inside cabin, the adults gathered together and the environment was thick with confusion. Jack and Shinning Sun walked in and went to see Sarah. They entered her room and looked upon her.

"Well, child, we have never seen anything like that before." said Jack.

Shining Sun sat on the bed next to Sarah and her arrows, "You know my dear, I believe I have a great challenge on my hands. I have never known magic like yours. But, you learn quickly. So, that is good."

"She needs rest, it is time for you two to go.", said Verna.

The night faded quickly as Sarah settled into her bed. She laid there for a moment listening to the others talking in the kitchen. The conversation between them echoed down the hallway and she drifted off to sleep.