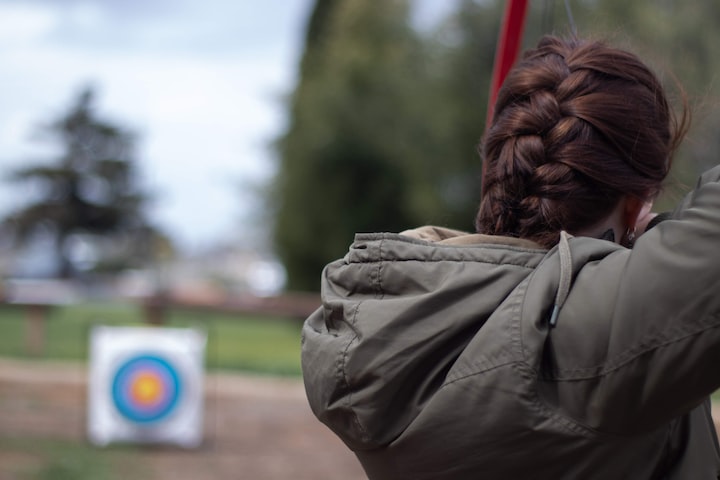 Photo by Adam McCoid on Unsplash

Morning came and went. Sarah woke to the noon sun's rays. She rolled over in her bed and her muscles stung and her arms rebelled against use. Still she rose and painfully reached for her quiver and she scuffled to the kitchen and seated herself in her favorite chair. No one seemed to be around and no movement could be detected.

The card sat on the table and she picked it up and read it again. She shook her head and thought, "If only his mother knew how he treated us kids at school. He wasn't sweet at all. He was always mean and nasty. However, he did like to punish us." She put the card down on the table and pushed it away.

Outside, she could hear Chavo laughing so she went over to the window and peeked out to see what he was doing. Sarah smiled as she watched Peter place a head on a snowman. Marcus and Mary were building a snowman of their own and they chatted with each other as they did so. Verna emerged from the old crone's house and inspected everyone's work as she passed their snowmen. Sarah rubbed her arms and turned to sit by the fire.

Verna entered the cabin, "Oh Sarah! You're awake!" She took off her jacket and shed her boots and walked over to Sarah. "I was just at Shinning Sun's cabin. We made an ointment for your arms. I am sure you are very sore today." she said as she took off her coat.

Sarah went to yawn and stretched but recoiled in pain. "Yes, I am very sore."

"There you go, little Wind Witch, you should feel better in no time." Verna said as she helped Sarah dress for the day. "Now, lets get you fed." She said as she shewed Sarah from her room and into the kitchen.

The boys rushed into the cabin and greeted Sarah and Verna. Verna smiled over her shoulder as Mary and Markus entered the cabin. They were smiling and chatting with each other. Sarah watched as they helped each other knock the snow off their clothes. Chavo and Peter sat down near the fire to warm.

"Did you two have fun?" Verna smiled at the couple.

"We did, the fresh snow that fell over night was perfect for snowmen today." said Mary.

"I have already used the ointment on Sarah. She was very sore this morning." said Verna smiling at Sarah.

Markus turned and studied Sarah, "I am sorry to say, Sarah, you will have to try again today. Those muscles need to build in strength." He watched Sarah frown, "You will get better in time and the soreness will go as your muscles build."

Sarah looked over at the quiver with a frown. "I don't know why. I can't even get close to hitting any target."

Markus looked over the the boys and smiled. "We've spent hours getting ready for your lessons today. The boys are planning on joining you. Chavo cant wait to skewer a snowman."

"My hands are a bit cold, but they will warm in time to go back out this afternoon. He rose to his feet and retrieved his spear from the corner. "I am going to see what I can do with my spear." Said Chavo

"You three will have to wait. It will be a few minutes before the food will be ready so you might as well rest until you have eaten your noon meal." said Mary and Verna nodded in agreement.

The sunny skies began to cover with clouds as the three kids stepped outside. Their eyes still squinted with the brightness of the sun's rays reflecting off the snow. The boys looked at each other and ran off ahead of Sarah. With a sigh, She followed the boys to one of the snowmen. They made a mark on the snowman and turned and smiled at her.

"You just need to have a little fun! I mean, he scuffed his feet, I remember being watched by my father and I couldn't hit a thing. Once I started practicing on my own, I wasn't too bad of a shot. Let's give it a go. " Chavo smiled and Peter nodded in agreement.

With a sigh, Sarah readied her bow and arrows as Chavo and Peter readied the spear. Sarah leveled her eyes on the snowman's mark. She reached over her back and grabbed an arrow and slid it out. She placed her left foot forward with her right foot in back of her. She lined up her shoulder to face the white lump of snow smiling at her. With her eyes fixed on her target, she knocked her arrow and drew the bowstring back resting her hand on her jawline. She lowered the tip of the arrow to match up her arrow point to the mark in the snow. She pulled her hand back and her fingers brushed past her ear as she released the arrow. The arrow flew through the air and struck the snowman many inches below the mark.

"Ugh, I am never going to get this!" she yelled to anyone willing to listen.

She shot off four more arrows one after another. Each arrow landed in places that were not even close to her mark. Sarah stared at the arrows sticking out of the snowman's belly with a frown. Once again she drew another arrow and lofted it into the air and landed near the X and she smiled.

"Sarah, come." said the old crone exiting through her cabin door in an old shawl.

The boys looked at each other in concern as Sarah headed towards the cabin. After knocking snow off her boots, Sarah entered the cabin. She could see that Shining Sun was sitting on her leather pelt waiting for her. Sarah's eyes adjusted to the darkness of the room and made her way to Shining Sun. Sarah retrieved her own pelt and laid it on the floor and lowered herself upon it.

"My dear, those arrows fly on your wind. As you breathe in, you breathe in your magic. You need to pull in the energy from the air. As you exhale, you breathe life into their flight. Those," she nodded at Sarah's bow and arrow, "are magical items. You must use your magic to make them work well." She lifted a wooden arrow from the quiver. "The fletching feathers need feather medicine. They will celebrate having some wind work done on them while you are shooting." The old crone stroked the feathers and blew on them as she did so. "See, wind is what they ride on. Do you understand?"

"So, I use my magic to breathe the life back into them? Sarah was eyeing the crone blow on each feather.

She leaned in closer to Sarah, "Yes, you do understand. Now, lets go and try it."

Sarah and Shining Star stepped out of the door and chuckled when they saw the boys taking turn throwing the spear at their icy friends. It was clear that Chavo did indeed have talent in landing a good stick with the spear. He and Peter laughed as they removed the spear out of the head of one. Peter's skills were dismal. Half the time the spear hit the snowman sideways or bumped and skidded off the snowman's round body. Shining star's laughter was so round and happy as she watched the boys at play. Shining Sun just loved to play and she rushed off to join in the boys' fun. Even she tried her hand in throwing.

After a brief moment, she turned to Sarah. "Now, my dear, try it again."

Shining Sun watched Sarah ready herself to shoot. Once Sarah was ready to draw, she sided up to her and said, "Breath in and draw. Aim, then exhale as you release." Sarah let loose, the arrow flew straight and hit near the target. When Sarah saw the result, she turned and Smiled at Shining Sun.

The boys watched as Shining Sun coached Sarah again and again. The arrows flew straighter and straighter as Sarah got the sequence down. Snow man after snowman wore an arrow and Sarah and Shining Sun was beaming with pride.

Once again Shining Sun instructed her to shoot. Sarah began to pull an arrow from the quiver and the old crone stopped her, "No, call a black arrow."

"Call a black arrow?" Sarah said in a confused manner.

Shining Sun smiled and walked up to Sarah, "It's simple. Hold your hand over the quiver and say, 'here'!"

Sarah lifted her hand over her shoulder with an open hand, "Here!" She said. The arrow jumped into her hand. Her fingers wrapped around the arrow and she pulled the black arrow into her view. With a smile, Sarah beamed at the old crone.

"Well. What are you waiting for?" said the old crone.

Sarah took her stance, notched the arrow and drew her bow. With pull and release, the arrow flew and pierced an one inch hole straight through the snowman. The arrow did hit its mark but its power caused everyone watching Gasp. After a moment, cheers went up from everyone who came to watch Sarah practice.

The old crone's turned to Sarah with a smile, "Now. Call it back! Hold out your hand can say, 'here.'".

Sarah turned her attention back to the arrow. She held up her hand and said, "Here!".

The black arrow was buried under the snow yards away from the snow man. It jumped up out of the snow and turned itself and flew through the air to land in Sarah's hands. Markus' began to clap his large hands and his clapping rang across the glade. Sarah smiled as Chavo and Peter ran to her smacking her on her back in celebration. Their eyes shifted back and forth from the arrow to Sarah.

Peter reached into his pocket and retrieved a pencil and paper. "Shoot another one! That was awesome!"

Sarah read the note out loud. She began to line herself up with her target and reached over her shoulder and said "Here". Like before, the arrow landed in her hand.

Dragonfly was watching from the shed and yelled, "NO! Do not use them until they are needed!"

Everyone watched the old creature make his way to Sarah, "Remember child, magic items need much respect." he hissed and looked at Peter. "The black arrows are not toys."

"Use the regular arrows. Get back to practice!" said the grumpy creature as he went back to the shed.

The afternoon crept into darkness as the children gave up their imaginary fights. The snowmen were tattered with the day's play and the kids felt very victorious! With laughs and giggles, the children went to the cabin for a night's rest and a hot bowl of soup.