Bull in a China Shop

by Nathan Miller 9 months ago in Short Story
Report Story 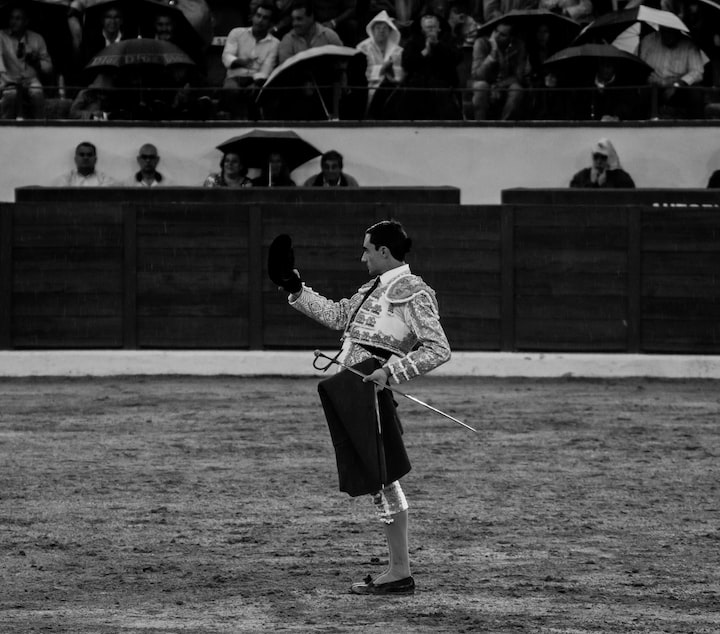 Photo by Manuel Cordero on Unsplash

It became too much for Juan to bear. For years, he was known as one of the biggest matadors around. But it all changed that one fateful day. It was the day that he lost his rival. Together they fought bulls while trying to outdo each other in the public eye. But their friendship was far greater than what their fans or even they had realized. They didn’t seem to notice it, but they needed each other. Without his rival, the job had lost its touch. How can you show that you’re the best if there isn’t someone there to challenge that?

The year was 1920 and as the sun had filled the day with heat, the audience that night lit up the stadium with a burning passion. This feeling was going throughout, even to the back where Jose was preparing to give his crowd a show. But something didn’t feel right, it was as if he had some strange feeling about what could happen. He hadn’t had this feeling since the beginning of his career, though he had mainly learned to ignore it. So, it just stopped coming, but it returned today. However, there was no time to lose, the audience was ready and the only thing to get rid of that feeling was to go out and give them a show.

That’s when he saw something, his very own rival, Juan was sitting there. Now, recently, Juan had challenged him to do better than he had the previous night, as that’s how their relationship seemed to work. The two worked to defeat the other by defeating their bulls faster and better. But Jose was not expecting to see Juan tonight, usually they’d hear of the other’s accomplishments through word of mouth, fans would always talk about what the other had done. So, Jose saw this as potential overconfidence on Juan’s end or something very different. Though, Juan didn’t have a look of overconfidence but rather one of concern. It was as if he had known what could potentially come that night and was worried. Still, Jose didn’t let this get to him and decided that he must continue.

The crowd cheered as Jose came out and stood by his brother-in-law and fellow matador, Ignacio. They looked at the audience as they prepared to fight the night’s bull. Jose then stood as he awaited the bull. He held a cape before the door was released and the bull was about to come out. Just then, a cloaked man from the audience jumped out and began to ride it. It ran towards Jose before avoiding him. He looked over to see Juan was nowhere in sight in the audience anymore. As the cloaked man rode the bull, the audience cheered and laughed as it rode in circles. Jose’s mind suddenly filled with confusion and anger as he had thought that Juan had been there to keep his title. This rivalry wasn’t just a fun way for the crowd, it was for his ego and Juan was sick of giving Jose any more triumph of his own. So, Jose had come to stop the cloaked man and as he ran in front of the bull, he was pushed away.

Juan had been waiting on the side as Jose realized that his rival had pushed him down. The cloaked man continued to ride the bull and take the audience. Was this a new challenger? Did the duo have a new rival that wanted all their fame and glory? As Jose tried to go after, the cloaked man disappeared into the other room with the bull. The crowd stood confused and cheered for the new matador while Jose looked at Juan and asked, “Why? Who was he?” Juan looked at him and responded, “If I told you, you wouldn’t listen, my friend. But without him, we would’ve all lost you today.”

Jose was confused before going into the room with the bull only to have seen it gone, along with the cloaked man. Juan had come after him as they both ponder on this mystery. Just then, Ignacio comes over handing Jose a note. But before he read it, Jose had begun to say, “Ignacio…it was…” Ignacio shook his head in denial as he handed the note over. Jose read, “Dear sir, I hope my letter finds you in good health. I hope this because I didn’t want you to have to die today like you were supposed to. That would’ve been a load of bull. Speaking of which, you’re probably wondering where that animal is, well, you know that one phrase? Yeah, those china shop owners won’t be happy. Sincerely, A.T.” Jose had looked at the letter in shock and continued to have looks of confusion. “Who is this?” Juan had just said, “Just someone who offered me a favor. Though, he did also promise me a ride back.” Jose smiled at his rival before patting him on the back. Juan then said, “You know, I’m glad to still have you here.” Most of what had happened didn’t make much sense, but one thing could be possible, a tragedy was suddenly prevented.