A man, his girlfriend, and her best friend set sail for a boating trip. Only two will come back alive. 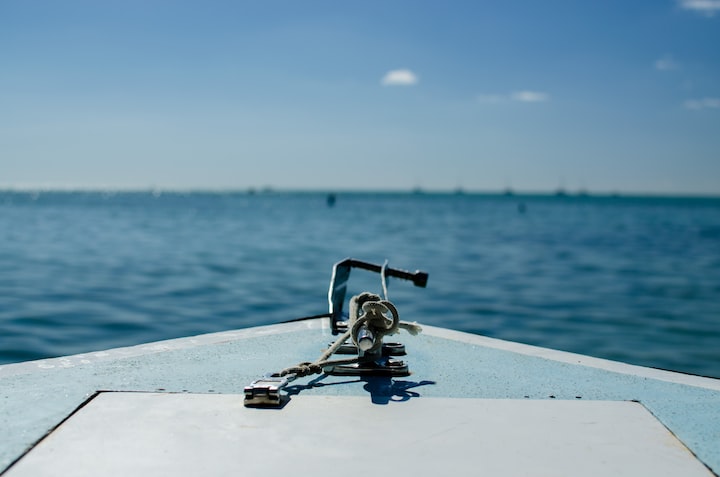 It was the perfect day to take the boat out. Christine was sold on the expedition the second I suggested it. Summer was well underway, and my nature-loving shutterbug girlfriend was more than excited to get some shots of the ocean as it came alive under the July sky. After a fair amount of begging, she convinced me to let Scott tag along for the trip. As she explained, he was a co-worker at the photography studio she worked at who she bonded with over how they were both insatiable photo geeks. I usually didn't permit strangers from commandeering the boat my late great father passed down to me, but for my girl's best friend, I was willing to make an exception.

The sun's rays were at an ideal warmth as we set out for the open sea. Christine and Scott were quick to bring out their cameras while I got started on the case of strawberry daiquiris I'd brought. Shut up, they're tasty and my manhood will do just fine without your approval. After enduring several rounds of camera clicks, Christine and Scott took a break from paparazzi-ing the ocean to drink with me. Christine and Scott gushed about work, and Scott and I even got to talking about how we both had older brothers who loved to terrorize us as kids. I had to admit, in that moment, I could see why Christine had taken such a shine to Scott.

After polishing off a few bottles, Scott went back to photographing while Christine and I had a little "private time" together. Or at least, as much private time as we could have with a dude on the other side of the boat. Kissing on that deck, Christine's lips still tasting like strawberries, I remembered the first time we ever kissed. It was in my car after we'd had our first movie date in college. It was a surprisingly awesome first kiss, considering it came after I was half an hour late picking her up and almost choked on a popcorn kernel in the middle of Guardians of the Galaxy. She was the best part of spending four years at that hellhole of a university. Looking at her in the bright summer sun, Christine was just as beautiful at that moment as she was the first time I ever saw her.

My view was quickly obstructed by Scott pressing a rag over half her face.

Of course, I saw the interruption coming. While my lovely girlfriend was preoccupied with our make-out sesh, I could see Scott readying the cloth with the chloroform I'd managed to procure for him. It's amazing what you can find on the Internet if you know where to look. Of course, Christine immediately started to fight back, but being a petite girl in the grip of a surprisingly muscular photographer, her attempts to escape were futile. She even had the audacity to look at me with her pleading puppy dog eyes, as if she believed I was going to swoop in and be her savior. Not likely. Soon enough, her pitiable eyes fluttered shut and her muffled cries for help were silenced as the chemical did its job. Now limp as a ragdoll, Scott carelessly dropped her to the deck.

I flinched at the sound of her head hitting the floor with a thud. Don't be confused, it's not because I was worried she'd be hurt. I just didn't want her dying such a painless death. Death by head wound was too good a demise for a heartless whore like her. She really should've been more careful with her phone. She left it on the kitchen counter one night while I was cooking us dinner. It went off and, out of pure curiosity, I looked. If she'd had a lock screen, I wouldn't have been greeted by the world-shattering sight of a dick pic in my girlfriend's DMs. I might've rationalized it away as a spam message if I hadn't seen the caption "This big guy's aching to see you, Chrissy ;)" written under the photo--or the multiple other pics and messages detailing her steamy little affair.

I'd initially planned on making this boat trip a solo endeavor, with Scott being unable to attend due to being busy rotting in a dumpster somewhere. But after reading through all of their conversations (heartbreaking and disgusting as they were), I came to realize another facet to my girlfriend's treachery. In addition to screwing around behind my back, she was lying to Scott's face with every breath. Don't know how some other guy hasn't swept you off your feet by now, one early message from Scott read. You're the first guy I've fallen this hard for was a later reply from her. The ease with which she'd dismissed the love we'd shared as nothing was what got the gears turning. And when I met with Scott and told him that he'd been similarly betrayed, I was pleasantly surprised to find he was willing to help me give the two-timing bitch what she deserved.

And thus, this fateful boat trip materialized. Scott had already been hinting at work how eager he was to get out on the ocean for a photography session, so it was easy to predict that our prey would ask me to let him join us on my boat. I even put up some faux resistance to stay completely in-character as the goofy sentimental boyfriend who had no clue he was in the presence of unfaithfulness incarnate. For all the glorious memories kissing her brought back, it still took every fiber in me not to throw her overboard right then and there.

But first things first: we had to prepare the ocean its meal.

Pulling a Bowie knife from his back pocket, Scott was ready to get cooking. Likely thinking strategically, Scott cut a long gash down her leg, sending an ooze of red onto the white deck. To put a personal touch on this aquatic feast, I took the knife and carved a pair of slashes across her deceptively innocent face. Her body now ready to be served, we lifted our now former shared lover over the side of the boat and let her fall into the ocean. Watching the water near her wounds turn red, I prayed that a shark was on the prowl nearby. From the look on his face, I could see Scott had the same hope.

And as if the planets had aligned just for us, a dorsal fin appeared.

The first bite to her leg was enough to bring her out of her drugged unconsciousness, leaving her awake as the grey creature chowed down on the free lunch we'd provided for it. The screams that emanated from the despicable temptress I once called the love of my life brought peace to my bruised heart. When the screams subsided, all that was left were crimson-stained waves.

The act completed, I went about throwing her camera into the water where the deceitful photographer once laid while Scott chucked the rag and chloroform bottle far in the other direction. Scott then went about wiping the deck clean as I began sailing us back to shore. We had to get there quick and have the boat ready for the final stage of our plan: to play the part of two traumatized men having just watched a woman fall into the ocean and get eaten alive by a shark. We had our story mapped out to the letter.

And the truth, along with whatever was left of that wretched woman, lay deep beneath the Floridian sea.