by Jess A. Smith 11 months ago in humanity

When eating is a battle 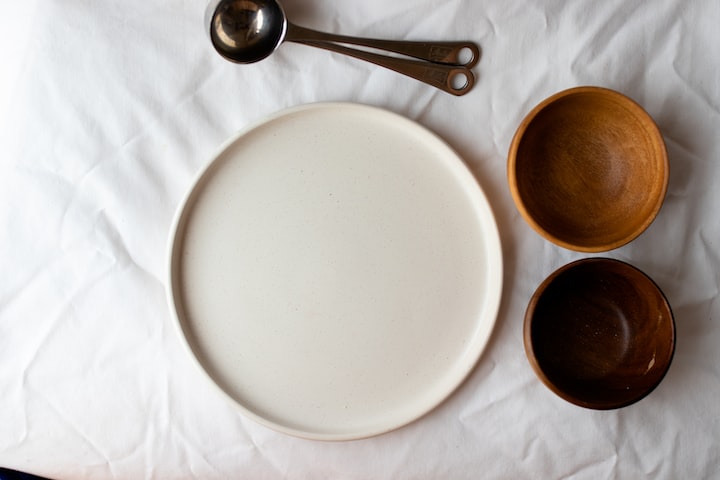 Photo by Callum Shaw on Unsplash

“You have to show them you are making an effort,” I said through clenched teeth, the sweet potato coating my mouth with carbs. “I know it’s hard, and I’d like to say it gets easier, but I’ve been here for over two months now and have done this three times a day...I’m still struggling.” I shrugged, no use in sugar coating it for the newbies. “What’s your name?” I asked, trying to distract her from the task at hand-cleaning her plate. “Mel,” she answered, but I knew that look. It was the look of horror and nothing I said at this point was going to help poor Mel in completing her gambit. I turned to Francesca and Char in hopes of some sort of conversation; the truth was I was the one who needed distraction. If I could talk and eat at the same time, I could usually manage to not think about the fat, carbs, sugar and calories taking over my body with every mouthful of this torture we called sharing a meal. Francesca was looking a bit pale, I noticed as she glared vehemently at the sweet potato in front of her, the last obstacle on her plate. I was a bit jealous; she had already finished the chicken breast and broccolini. “That’s why I start with the hardest part first,” I joked, motioning to my half eaten spud. Char chimed in with a peppy “Me too!” and Francesca joined Mel on team silence and horror. I shrugged at Char and took another bite. “Are you ready for group session?” She asked, chewing. “Not like we have much of a choice”, I answered, trying to push the conversation along as I took mouthful number four of orange goop; “Looks like we have two new people today, so it should be interesting at least.” I glanced over at Mel, still in shock, and the other newcomer sitting alone at the end of the long cafeteria table we were all forced to eat at. A guy. He was the only one. He was actually the only one I had seen since arriving here. I decided to pick up my plate and head towards him, in selfish hopes of striking up a conversation that lasted long enough to finish my meal.

After lunch we all headed into the Cozy Room for group session. This is the routine: Wake up, eat, freak out, group session, one on one counselling and/or doctor, eat, freak out, group session, recreation, eat, freak out, group session, bed. Repeat. We were currently in the midst of freak out group session number two of the day, but for Mel and Connor, this was a whole new experience. Everyone was struggling a bit and desperate to get their minds off digesting, I walked in with Conner, he and I still in the middle of our conversation from lunch. “I know what you mean,” I said with a grin, “the movie was a total disappointment! I was so bummed because it was hyped up to be the best one yet!” “Oh well,” he said, eyes on the giant blue bean bag chair in the corner of the room. “So what’s the go with all this? Are we expected to share our deepest darkest self deprecating secrets and cry a lot?” He asked, eyes rolling. “Something like that,” I said, mimicking his apathy. In all honesty, I liked the group sessions. I liked getting to know the strangers we shared our most intimate daily activity with-eating. And I liked the session leaders. They weren’t the same people that watched over us like parole officers in the dining hall. They were obviously trained counsellors and they were sympathetic, something we were all in desperate need of. More than anything, these sessions helped me to prepare for the next meal and to armor myself for the daily battles that my mind and body had with food. “I need it. It sustains me. I want to live a sustained and full life. I need it.” This mantra was something one of the counsellors had taught us my first week at Quiet Creek, and one that I hoped to share with Mel and Connor once they were a bit more acquainted with things. With each meal I could feel myself winning little battles, and I saw my fellow ED comrades as soldiers in arms alongside me, fighting the big war.

My thoughts were interrupted with the sound of a raised voice, frantic and angry. It was Connor. “This is bullshit!” He snapped, emphasizing the “t” into almost a spit. “I didn’t give consent to be here! I have rights too and this is so not what I wanted to do with my summer! My parents may have forced me here, but you can’t force me to share shit with any of these skinny ass girls or any of you counsellors!” He put air quotes around the word “counsellors” for an added dramatic effect. He was high on adrenaline, emotion, and a full uncomfortable belly; not a great combination, but one I had seen several times since being here. One I had given in to my first week here as well. It was hard not to feel like a prisoner. All of us were under age and our guardians had signed us in to the program. And most of us didn’t think we needed to even be here, especially in the beginning. The other girls and I shared quick glances with each other, all thinking the same thing. “It’s nothing personal. We skinny ass girls totally feel where you’re coming from.” The counsellors let him vent and then redirected the conversation. As awful as it sounds, drama like this was so good for keeping our minds off of what was going on in our bodies right after a meal. And I leaned forward a little bit to get more involved. By this point, Connor was out of steam though, and sank back down into the fluffy blue bean bag; embarrassed and worn out. The remainder of the session was pretty low key, and although I shared the story behind my ardent hatred for sweet potatoes, it didn’t seem like anyone was super keen to dive deep into the world of disgusting root vegetables with me. The afternoon passed with the steady flow of program inflicted routine, and we soon all found ourselves back at the heart of it all, mealtime.

Little did I know though, that this was going to be my last meal with Francesca, Mel, Connor, Char and the rest of the strangers I had grown so used to. After dinner, on my way to group session, I was stopped by Ellie, the program leader. She revealed that I was being discharged this evening, if I wanted, and that after group I could go pack my bags and head to one last one on one counselling session. I was a mixture of emotions, elation, fear, confusion, pride... I sat in the Cozy Room taking in the faces of people who I knew I would never forget. So much about them I didn’t know. We weren’t friends on the level of knowing each other’s favorite colors or grandparents’ names; it was deeper than that. I knew every persons darkest fear, biggest demon, strongest struggle. And I understood it, on a cellular level, because it was mine too. I needed them; I used them as life preservers in the sea of mealtimes, clung to them in order to get through the storm that shook us three times a day. Lamented and vented with them in daily group sessions, and laughed with them during recreation activities. How on earth was I going to make it without these strangers?

Goodbyes are tough. You want them to stick and make an impact, seer a memory into your head; but more often than not, they are disjointed and clumsy. I honestly remember very little of the remainder of that evening. I yawned sleepy eyed and hope filled as my dad drove us down the long laneway of Quiet Creek to the main road. I promised myself I wouldn’t be back and silently thanked everyone that was still there for playing a part in my life.

Two weeks later I find myself at an eclectic café in my hometown. I look across my fruit bowl and lock eyes with a girl about my age. I know that look. I pick up my artsy misshapen bowl and plop down next to her. “What did you think about the movie Treachery?” I ask, ignoring her confused look at my sudden appearance. “I thought it was shit, especially given all the hype!” I take a bite. She takes a bite, mirroring me, and answers simultaneously, “It really was, wasn’t it?!”

So, the storm is here too. It always will be I suppose. I cast out my life preserver and reach out to cling to hers, as we each take another bite.

Words can spew and caress. They are both feathers and frigidity- tools to incite change or chaos. Words are powerful, and when strewn together with intention, who knows what they can create.

More stories from Jess A. Smith and writers in Feast and other communities.