Thought of and in the oven in 15 minutes! 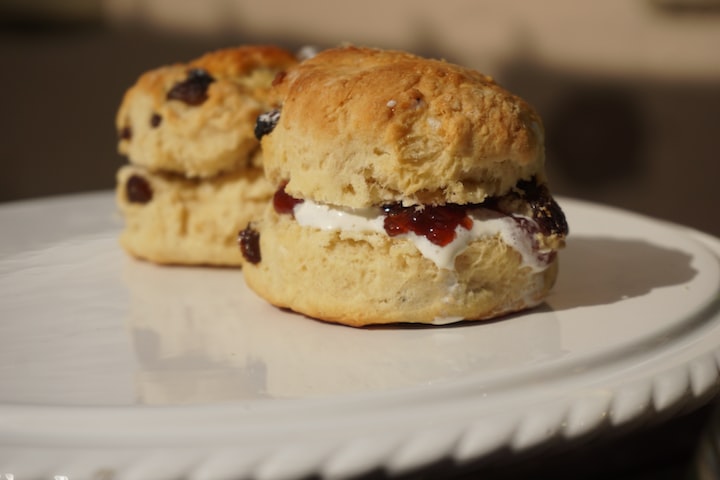 Photo by Sarah Kilian on Unsplash

“scones should be thought of and in the oven in 15 minutes.”

I love a scone. Scones would have to be the most easily prepared and accessible comfort food. They bring to mind afternoon teas around my grandmother’s kitchen table. The bowl of thick cream and a dish of raspberry jam would greet my sister and me when we came home from school. Sometimes they would be cheese scones with golden crispy cheese tops and cut chives mixed through them.

They were always hot and fresh and plentiful. They were accompanied by hot milk or milo, making my heart sing.

I lost my mother at the age of 5 and spent some time living with my paternal grandmother, Margey. My mother passed away suddenly, and my father found himself emotionally unable to care for us for a time.

The foods that I was served during this time of loss and mourning are the foods that I remember and associate with love, comfort and warmth. Milk arrowroot biscuits with slabs of butter, homemade ice cream and warm stews served with bread and mashed potatoes. Scones are something that I have carried through to adulthood, motherhood and now grandmother-hood.

When friends say they are dropping by, I will often make a batch of scones. They are easy, and I always have the ingredients on hand.

So just what is a scone?

The humble scone is a baked good usually consisting of flour, butter and milk with a raising agent such as baking powder. There are many items you can add to a scone.

The scone is the basis of a cream tea, sometimes called the Devonshire Tea and is thought to have originated from Scotland as the sgoon as early as 1513. It could also have been derived from the Dutch schoonbrood (Spoonbread), a Dutch quick bread. There was also a German schone which meant fine bread. It is thought that the combination of all these different quick breads culminated into the “scone” that we know today.

Traditionally the scone was a flatbread as round and flat as a dinner plate, cooked on a griddle and served in triangular sections. When baking powder became available to the masses, the scone took on the size and shape we know today.

British scones are slightly sweetened and can include raisins, dates, cheese or currants. In Scotland and Ireland, the scones were also prepared using potato flour, sometimes referred to as “tattie scones”. Potato scones are served fried as the basis for a full cooked Scottish breakfast.

Other common varieties include the drop scone and the lemonade scone, made with lemonade and cream instead of milk and butter. The savoury scone can have such additions as cheese, onion and bacon.

Australia has the pumpkin scone, made famous by the premier of Queensland’s wife Flo Bjelke-Peterson in the 1980s, A fantastic and New Zealand loves a cheese scone.

Cheese Scones (a favourite with the Kiwis)

“I asked the maid in a dulcet tone

To order me a buttered scone;

The silly girl has been and gone

And ordered me a buttered scone.”

Let’s return once again to my grandmother's saying. “Scones should be thought of and in the oven in 15 minutes”. Providing you have the ingredients, this is indeed the best way to approach scones.

The ingredients are simple:

The preparation is quick:

My grandmother always said that it would be ruined if you handled scone dough too much, hence the stirring or mixing with a bread knife.

I have returned to baking comfort foods such as bread and scones during the current restrictions, and I have also recalled many fond memories of my grandmother and her excellent advice.

More stories from Lisa Ikin and writers in Feast and other communities.