It’s Not About the Stuffing

It’s about tradition, and what it represents. 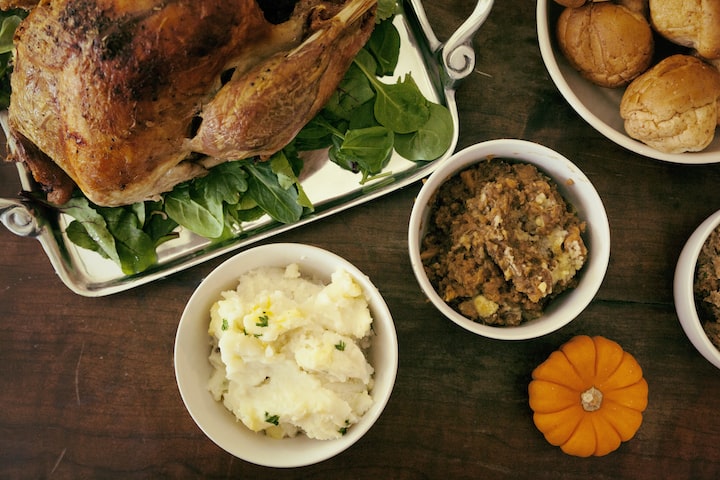 First things first, I despise stuffing. That may seem a bit harsh and will probably have a few people rolling their eyes but, it’s true.

I’ve tried many different kinds, including the beloved StoveTop brand. The stuffing I have come to favor the least though has sat at our Thanksgiving table for as long as I can remember.

I’d watch my family serve portion after portion of it onto their already over flowing plates. Meanwhile I’d skirt past it with a scrunched up nose as I moved right on to the mashed potatoes.

The efforts to get me to love it have been many. My mom always encouraged me to ‘just try it.’ A classic suggestion that all mothers make. When I was younger I wouldn’t touch it with a 10 foot pole, but older and more curious me sang a different tune.

My pallet was changing and I found myself liking foods I hadn’t before. As a teenager I became more open minded, and one year I decided not to skip right on to the mashed potatoes. I served myself the tiniest portion of stuffing, and braced for the explosion of flavor in my mouth.

I anticipated it to be life changing, judging by the way my family always scraped the dish clean.

What I got instead of that explosion of flavor was a mouthful of soggy bread, chicken, ground beef, potato and a hint of apple.

My nose scrunched up as it did many times when I was a child, except this time my reaction was justified.

Choking down the spoonful that was in my mouth, I immediately felt concerned that all of my aunts and uncles tastebuds were damaged somehow.

Why was the stuffing so loved and consumed with so much gusto by my mom and her siblings? The answer was more simple than I thought. It was the stuffing my grandmother had made for them every Thanksgiving.

The responsibility to keep having it present at our Thanksgiving table fell on either my mom or one of my aunts after my grandmother passed away.

Year after year it sat comfortably among all the other side dishes, and was always consumed with praise by my aunts and uncles of how much they enjoyed their “mom’s” stuffing.

It wasn’t that it was the most amazing stuffing ever created, it was simply a stuffing that was associated with my grandmother. Her love and light continued to live on in the memory of a side dish that became a tradition.

Where we celebrate Thanksgiving changes yearly. However, the stuffing still sits at one of our spreads.

This year I realized it would be missing from our pending gathering on Thursday. Though it will be present in another city thanks to my aunts who won’t be joining us this year, it still was set to be absent for my mom and uncle.

For that reason only, I decided to roll up my sleeves and make the stuffing for the first time ever.

I wanted them to be able have their “mom’s” stuffing, so with the supervision of my mom close by I got to work.

Making it almost felt therapeutic in a sense that I knew it would make my grandmother smile to see me making her stuffing even though I had no intention of eating it myself. I wasn’t making it for me, I was making it for two of her children.

I wanted to keep the comfort of her presence in a Thanksgiving spread that was always changing and evolving. I know that my grandmothers stuffing may get by passed by others, but for two people it will indefinitely make its way on to their plates.

Family was always a priority to my grandmother. She taught me to be selfless when it came to bringing happiness to the ones around us that we love.

I will always despise the stuffing, and maybe one day in the future the stuffing may disappear from my Thanksgiving spreads, but at least I had the opportunity to learn how to make it. At least I know am able to give that to those who appreciate having it present the most, because having it there is like having my grandmother there.

Traditions aren’t always the most eye appealing or tastiest, but the story and reasoning behind them is where the real value lies.

I am thankful for what has been passed down, and continues to live on throughout each generation because we keep it alive.

We can continue to hold on to old traditions while still managing to make some new ones of our own that might one day be passed down too.

It’s not about the stuffing, it’s about the meaning and importance behind it that makes it valuable.

I’m a concert junkie who loves to go on spontaneous trips, eat life changing food, and enjoy life with family and friends who have become family. Living under an Arizona sky, I’m a dreamer and believer.

Receive stories by Mandy Raquel in your feed
Mandy Raquel
Read next: Cooking Basics For Beginners