How Cooking Lets Me Be an Imperfectionist

by Sarah Shea about a year ago in humanity
Report Story 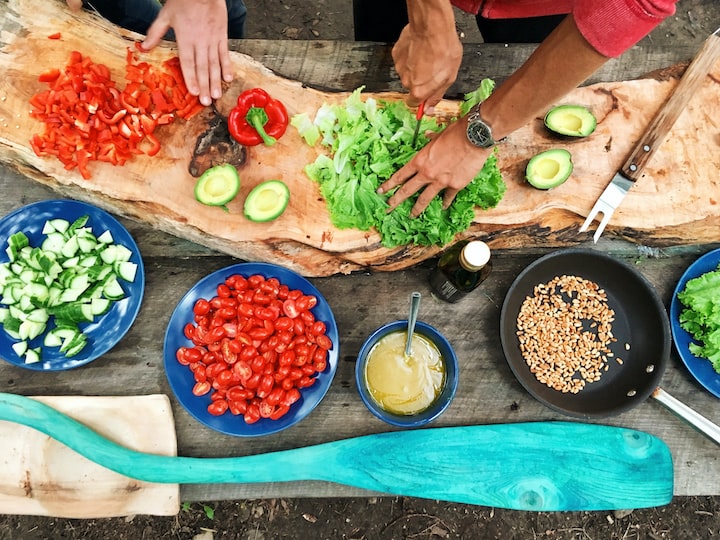 I am a perfectionist with almost everything I do. And while some might consider it my superpower, it gets exhausting.

I constantly revise and rewrite drafts of pretty much all my writing. I only ever paint landscapes or flowers because I can never get noses right. Sometimes I even refold the laundry when my husband isn’t looking.

Cooking is one of the only past-times where I allow myself a little wiggle room. So long as you don’t mix up the salt and sugar, it’s really hard to mess up a recipe to the point of disaster. Oftentimes, you just end up with a new flavor that tastes just as good as what you originally intended. And even if it is terrible, you can just toss it or stomach it until the evidence is gone. And you’re the only one who has to know.

True, sometimes I’m too exhausted to cook or just don’t feel like it, but I cook dinner most of the time and often make a nice breakfast or dessert on the weekends. And when I do cook, it both stimulates and calms me. All that matters is what I’m doing in that moment.

Cooking is an art, but it’s also low-risk. And it’s a practice and a process that I find fulfilling and rejuvenating for several reasons.

Connecting with My Heritage

My grandparents emigrated from Portugal when my mother was four, so I grew up eating a lot of traditional Portuguese food. I eat the heads off of fried sardines and I snack on figs like they’re candy.

In college, I went on two family trips to the Açores and had the most amazing food: stewed octopus, steamed barnacles, beef tongue, and fresh bread with butter, jam, and cheese every morning.

But I was born American and also grew up eating hot dogs, Chef Boyardi, and pizza. The only Portuguese I knew before I started practicing with a language learning app were food-related phrases and terms of endearment from my grandparents. I may have had my ears pierced at six months, as is traditional, but I still had a rather typical American childhood.

I was proud of my heritage, but still somewhat of a stranger to it.

But nothing’s ever made me feel more like a Portuguese woman than cooking Portuguese food myself.

Any chance I get, I go with my mom to a Portuguese bakery, butcher, or marketplace, all of which are at least an hour’s drive for both of us. The foods I find there never fail to hit me with a wave of nostalgia: pickled onions, dried fava beans, or the instant cappuccino mix that you can’t find in an American grocery store. I buy as much chouriço (a type of sausage) as I can fit in my freezer.

And bread. Lots and lots of bread.

I feel like a kid in a toy store at a Portuguese market. But cooking is the fun part.

My grandfather is the one who taught my grandmother how to cook. Now I cook alongside my husband, telling him stories about my grandparents. He sneaks morsels of the ingredients, especially the chouriço, and I have to smack his hand away.

I follow the recipes that I find on Facebook groups for Portuguese cooking and adjust the guidelines as needed. Take a look at another article I wrote on caldo verde (an amazing potato, kale, and chouriço soup) to find my recipe.

I’m no longer passively consuming the traditional food my family used to make. I’m making myself part of that tradition by immersing myself in the process.

The Prep and the Process

Speaking of the process, there is something grounding about prepping ingredients. Whether you’re new to cooking or revisiting a favorite recipe, working with your hands helps you get out of your own head. Chopping an onion, whisking an egg, stirring a sauce—all require focus to ensure a delicious meal and an unscathed cook.

This is also the part where I let myself color outside the lines, even if I’m not sure how something will turn out. Unless I’m baking or making something extremely difficult, I tend to think of recipes more as “suggestions” than anything else.

I remember following a recipe for tomato soup and stopping when I couldn’t find basil on the list of ingredients.

“What kind of self-respecting tomato soup doesn’t have basil in it?” I demanded of my husband.

He shrugged and told me to measure with my heart.

So, I do. Two cloves of garlic? Come on. A teaspoon of salt? Geez, did you run out?

Everyone has different tastes. And if I’m making a new dish, I’ll usually behave and try to follow the recipe. I just finished making a new recipe in the instant pot for pea soup. I added exactly what it said to, even when it told me that it only needed two cups of water to one pound of peas. I definitely raised my eyebrows at that one.

Twenty-five minutes later, I found pea paste in the pot that needed three cups of water and three teaspoons of chicken bouillon before it even began to resemble soup. That’s what I get for following the recipe.

If you’re new to cooking, following the recipe is a good idea. But don’t be afraid to experiment as you discover your own process and tastes.

I remember when my husband and I met at college. We attended a small, regional campus right by the water and used to take walks together in between classes. We were used to spending most of the week together for the first two years of our relationship.

For the next four years, we lived an hour apart and only saw each other once a week.

And one of my favorite ways to spend time with him was making dinner for us and his roommate, who was later his best man at our wedding.

We’ve only ever cooked in tiny kitchens (so far), bumping into and reaching across each other. What do you expect when we have so little counterspace that our toaster and paper towel holder vie for space on top of our microwave?

But those little touches and glances—the pause for a kiss, the jokes and laughter, the look of fear in his eyes when a knife strays too close to my fingers—that make us feel like young college kids again, even though almost eight years have flown by.

Believe it or not, I actually enjoy washing dishes. It appeals to the perfectionist in me that likes to (ahem, insists upon) being productive.

For two years in our first apartment together, my husband and I lived without a dishwasher and, as a couple who only orders takeout once or twice a week, a mountain of dishes piles up in the sink if someone doesn’t take care of them once a day.

On summer break, that’s usually me.

Do I enjoy scooping soggy food out of the drain? No. Do I bemoan the fact that I have to wash everything by hand? Absolutely.

But still. There’s something undeniably satisfying about seeing a full drying rack next to an empty sink.

Although I’m always too tired and too full after dinner to do anything besides collapse into a food coma in front of an episode of Golden Girls or Grey’s Anatomy, finishing the dishes and tidying the kitchen is a great start to the day the following morning.

At least until I have to start teaching at 8 a.m.; then I’ll be thankful for a dishwasher.

If I don’t do anything else productive that day, I’ll at least be able to remind myself that I kept the house clean, like a responsible adult or something.

In case you couldn’t tell, I love food.

And I can think of nothing more mindful than an activity that also nourishes you—literally. Whether you’re nurturing yourself with something healthy and fresh or indulging in something decadent and cheesy, you’re listening to your body and what it wants or needs in the moment.

Sometimes you need something green and leafy. And sometimes you just have to make pasta. I don’t make the rules.

But more than satisfying your body or your tastebuds, cooking can also satisfy your need for adventure.

Although I had quite a varied menu to choose from when I was a kid, I have much more freedom now to try foods from all over the world: enchiladas, butter chicken, shakshuka, fish chard soup, curry noodle soup, and countless other recipes that have become my new favorites.

True, I could support a local business and get food delivered to me that would probably taste worlds better than what I could ever make. I haven’t quite been brave enough to make my own roasted duck or pad thai from scratch. And that’s okay!

But I challenge you to find a recipe for your favorite takeout meal and try making it for yourself.

More stories from Sarah Shea and writers in Feast and other communities.