Go organic with these most sustainable eateries in London

U
by UniAcco 10 days ago in organic

These are some of the best sustainable eateries in London 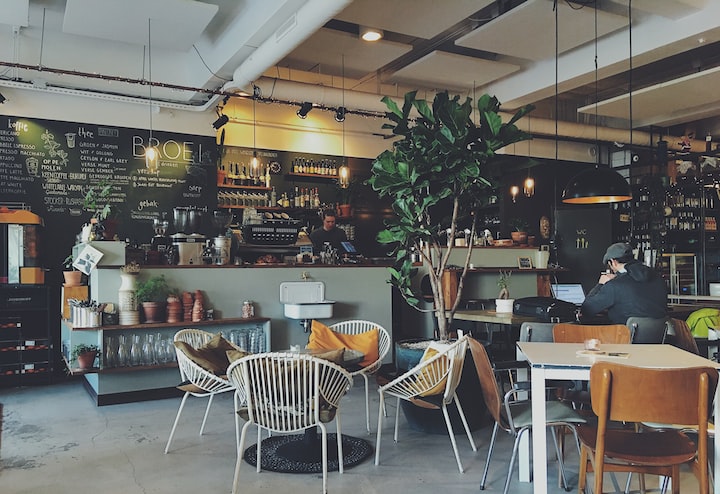 Photo by daan evers on Unsplash

All restaurants around the world have always paid close attention to what goes into their food but now that more and more numbers of chefs and eateries are concerned about what their food does to the outside world. Here, we bring some of the best sustainable eateries in London for you.

More people than ever are now considering sustainability as a major part of eating out, and more London restaurants are responding by adopting sustainable approaches to gastronomy.

From zero-waste eateries to cafeterias serving offcuts for Sunday lunch, these are some of the best sustainable eateries in London.​

Cub is the shared venture between cocktail legend Ryan Chetiyawardana and the popular chef Douglas McMaster. Apart from purchasing their food from sustainable sources, Cub’s interior also consists of reused materials. The counters are ingeniously crafted from recycled yogurt pots, while the air inside the place is filtered through the breathable clay used to construct the walls. The food is unquestionably delicious too: they serve dishes like confit Jersey Royals with fermented potato, whey, and mustard, as well as spring greens salad and wild garlic.

The factor of sustainability isn’t only for the vegan cafes – it’s a movement the fine-dining world is welcoming too. Roganic uses ingredients principally from local suppliers or their own farms in the Lake District. The eco-friendly drive, however, doesn’t end there: the farm switches big machinery for low energy hand tools, adopting scythes and broad forks. The produce is also recycled completely, waste from the eatery is turned into compost and used on the farm.

Spring goes further than most organic and sustainable restaurants and provides a menu devised especially around surplus produce. The “scratch” menu is composed of ingredients that would otherwise have been wasted. The daily changeable menu is only disclosed on the restaurant’s social media about an hour before it’s available which is only between 5.30-6.30pm but the sample platters hint at the likes of spinach and fennel top salsa and a chocolate Swiss roll.

Soon after opening his new Mayfair restaurant Kanishka, Michelin-starred chef Atul Kochhar came up with Zero-Waste Sundays, monthly lunches made with offcuts from the eatery’s main menus. The excess ingredients are vacuum packed and frozen, before being reformed on the menu on the last Sunday of every month.

Native is pretty serious about staying sustainable. The restaurant is focused on British produce, but its hyperlocal attitude prolongs to foraging locally for ingredients daily. It’s also considered as a zero waste kitchen: each day the menu starts with a snack that has been created by chefs wholly from the offcuts of the previous day. The restaurant also utilizes only sustainably derived fish and meat, alongside fruit and vegetables purchased daily from nearby Borough Market.

Caravan cares a lot about its coffee, but also about the waste our caffeine habit can produce. The eatery uses only takeaway cups that can be recycled up to seven times, and also provides customers a 50p discount for bringing a reusable cup. Caravan is also associated with Pale Green Dot, a community that collects all its organic waste including coffee chafe from across all its locations, and turns it into compost used in local farms. The restaurant also made the move in 2017 to remove beef from its menu and focus on vegetable dishes more.

The Duke Of Cambridge

The Duke Of Cambridge offers something exclusive and is setting Britain’s first verified organic pub, with its focus strongly on serving sustainable food. Absolutely all of the ingredients utilized in its kitchens are organic, and never imported via air freight or grown in heated greenhouses. Dishes include chicken served with escalivada and garlic cream, as well as a ricotta and ewe’s milk cheesecake.

Meat-centric endeavors aren’t originally a go-to when it comes to sustainable and organic eating, but Gourmet Goat is a remarkable exception. It is aiming to change the way the British public comprehend goat meat, a largely maligned foodstuff that isn’t just edible, but darn tasty. It’s kid goat kofta wraps take meat from surplus billie goats from the UK dairy industry, considering the fact that thousands of male goats are killed every year shortly after birth.

So Mercato Metropolitano isn’t an eatery but is a market in London made up of more than 40 food traders. The market is associated with Too Good To Go, a platform that helps traders sell off surplus food that would otherwise be thrown away, and has banned all single-use plastic from the site. The water refill points are also accessible across the market to encourage the use of reusable water bottles, and recycled glass bottles are used by traders.

organic
U
UniAcco
Read next: Easy, Cheating Prawn and Cream Cheese Risotto
U
UniAcco
See all posts by UniAcco →