A Piece of my Memories

by Cheryl Wray 10 months ago in humanity
Report Story 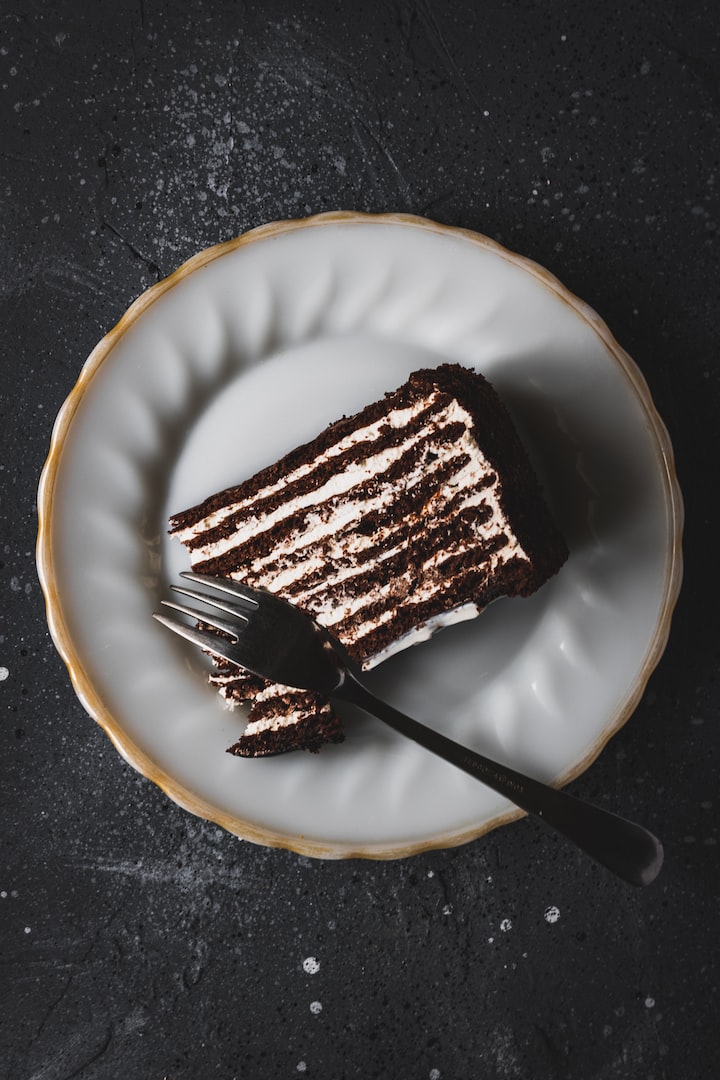 Photo by Vitalii S. on Unsplash

One of the first things I wanted after giving birth to my second daughter was a piece of cake.

The cake was called Chocolate Lasagna, offered back in the 1990s by a popular chain restaurant. While pretty to look at, it wasn’t really that fancy; it was simple, in fact, with 5-6 layers of dark chocolate cake interspersed with buttercream frosting and topped with white chocolate shavings.

On the muggy June morning of daughter Delaney’s release from the hopsital in Birmingham, I asked (nay, insisted) that my husband stop and get me a piece of the cake to go.

In a memory I still run to whenever Gary’s being stubborn in the present, he left me with newborn Delaney sleeping in her car seat and went and got me that piece of cake.

I was struck by his sweetness and sacrifice (looking back, it’s a testament to his willingness to give into whatever weird whims I may display; he’s also, unsurprisingly, dressed up as a storm trooper to my Darth Vader for Halloween and taken me on multiple backroad, way-out-of-the-way jaunts to find some quirky attraction I’d read about online.)

The cake was delicious that day, and I remember enjoying the cake again at least a few times after. Then it inexplicably disappeared from the restaurant's menu.

And, let me just say, that there is a real thing I like to call Food Regret. I’ve thought about the cake many, many times in the more than two decades since enjoying it last.

Has its appeal improved simply because of age? Has its taste become more legendary in my mind because of the passing of time?

Quite possibly...and yet I’ve continued to pine for a piece of its chocolatey, buttercreamey goodness.

Flash forward to just this last week when Gary and I went out to eat for a rare date night.

Long ago I’d stopped thinking the cake might appear again at our restaurant, and had settled in on some new favorites (their Italian margarita... hold up!); in the lobby on this evening, though, a promotional video screen (a lament on how restaurants have become screen-filled is an essay for another day) advertised some new offerings.

Baked pasta bowls (why is everything in a bowl these days? again, I digress)...$5 glasses of wine... and, then, “a classic dessert reimagined.” A picture on the screen looked somewhat familiar; multiple chocolate layers, frosting, shavings on top.

Once at our table, I yanked open the menu to discover a brownie lasagna with cream cheese frosting layers.

I turned to Gary, who was already quite amused by the entire situation, and asked two questions that could in fact hold the secret to just about every challenge in life:

1. What if this dessert is in actuality nothing like the one I’d loved so much, and I am in turn terribly disappointed?

2. What if it is very much like the dessert I have missed, but I don’t try it for fearing of being disappointed?

Those questions resonate with all the great quandaries...yearning, disappointment, regret, possibility. I’ve experienced them over and over again in my many years on this planet; and here they were again—and all because of a piece of cake.

I looked to Gary, who is quite astute and wise in being able to give easy, manly advice.

Didn’t he get it, though? The memories, the connection to the past... our own daughter, for goodness sake, now grown and in graduate school and away from home?

“It’s just a piece of cake,” he laughed, but with still a knowing glint in his eye.

I asked the waitress for details (“It’s good,” she assured me), ordered a slice, and after dinner cut a piece with my fork. I closed my eyes, put the piece in my mouth, and let it sit there for a moment before truly tasting it.

Yeah it was, as the waitress advised, “good.”

But the brownie was tougher than the earlier incarnation of cake; the cream cheese frosting thicker than the buttercream; the shavings dark chocolate, not white.

Don’t get me wrong: I ate the whole thing (!). But it was different, and not as satisfying.

And yet, Gary had been right...as he usually is about matters of the digestive track and the heart.

If I hadn’t tried it, I’d gone home wondering if I’d done the right thing. In fact, in a callback to 22 years ago, I would have probably sent Gary out the next day to bring me home a piece.

It’s too short to leave things to dark regret in the night... of broken relationships, of goodbyes, of memories not made, of apologies not given, of things that should have been said or experienced.

And, yes, of the dessert not eaten.

Eating the last bite of the cake, I let the frosting linger for a few moments in my mouth. My mind traveled back to those many years ago when I, so very young, relished a sweet taste of chocolate before settling into our home with our second daughter in tow.

Years have passed and I've learned many things...about love and daughters, of time and mortality, about hospitals and dinner tables, of loss and contentment.

I know that it's never wrong to hold onto precious memories and relish in the joy that surrounded them. I know that my memory of that cake from long ago is real and authentic, just as I know also that new cake is to be experienced.

New can be different.

And both can be better in their own ways.

I'm a trained journalist who now dreams of writing fiction.

More stories from Cheryl Wray and writers in Feast and other communities.