by Kari Hagerman about a year ago in art
Report Story 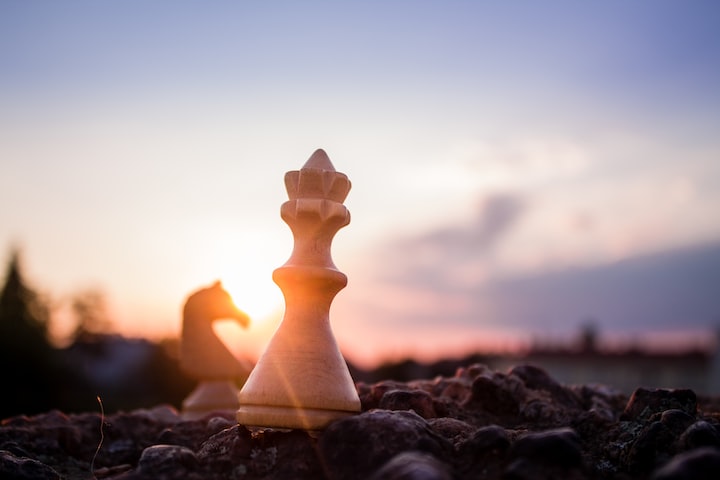 https://yoWhen I was younger, I painted my pictures with words. In my childhood, I explored the universe through books, fiction and non, and it seemed natural that writing was the art form running strongest through my blood. I learned to crochet – sort of - at the age of seven. To this day, I can create a chain of yarn from here to the moon, but I never mastered adding additional rows and the repetition soon bored my active adolescent mind.

It wasn't until my early twenties that I began to explore other creative avenues. Painting with oils on canvas became a favorite pastime. Eventually, I added decoupage and then sculpture. What I could never manage was delicate, intricate projects. I always admired those who had the patience and dexterity to create detailed jewelry or mosaic works with tiny tiles. I felt my fingers were too chubby, and I wanted the end result too quickly. That all changed later in my life, when my daughter, Alexandra, discovered chess.

Alex was 9 years old when she joined the chess club at school. A month later, she tied for Chess Queen at her first tournament. Another month on, she was the stand-alone and took home the trophy for Queen at tournament number two. I knew Santa would be gifting her a special chess set that that year and I began my search in late September.

At the tender age of six, Alex had fallen in love with sharks. While she initially announced that she would be an elasmobranchologist as an adult, she has since modified her title to marine biologist, understanding that the word for "shark scientist" baffles most adults. Because of her passion, I sought a chess set for her that incorporated marine creatures. I found some lovely sets, but I wanted something more unique than what I was seeing.

On one of my many visits to the local craft store to buy canvas, I passed the jewelry making section. I detoured down the aisle, and inspiration struck. Pendants of all sorts, hanging, glittering, beckoning. An octopus, a mermaid tail, sea turtles. I could create the pieces myself!

I pulled down every ocean-related charm in the store and sat down right in the middle of the aisle constructing pieces in my mind, lining them up, switching them out. Eventually I realized I wouldn't be able to determine a final design there on the floor, so I purchased all of the products and tucked the receipt safely into my wallet for the inevitable return of what wouldn't be needed.

Over the course of the next week, I visited every craft and bead store within a 50-mile radius. After countless purchases and returns, I had made the final selections for charms that would represent the pieces. The white characters would be silver with white accents, and the black would be bronze-ish with turquoise. I had wanted to adhere them to metal bars, but after much searching, couldn't find what I was picturing. I finally decided that I liked the look of large bolts, and could adhere the charms to them with wire. Once again, I plopped down in the aisle, this time at our local home improvement store, and lined up various pieces of hardware until I was satisfied. Rose gold paint would match the bronze pieces nicely. All materials in hand, I was ready to get to work.

Over the course of just a few days, I lovingly, carefully glued tiny individual beads to jewelry wire. I attached the charms once the wire was adorned and then secured it all to the bolts. Suddenly I had immense patience and my fingers were nimble. Finally I topped each piece with larger beads. I was surprised to realize that the creation of all 32 pieces only took about eight man-hours.

When I initially determined that I would create these pieces, I had thought I would purchase a board upon which to play them, but somewhere along the way, I also realized I also needed something unique in the base. I don't know when or how the idea came to me, but unlike with the pieces, I had one, unchanging vision. Once the pieces were complete I set about making the board.

Utilizing a 12 x 12 shadow box, I laid it glass-side up. With teal colored glass paint to match the beading of the black pieces, I colored in one- inch square checkerboarding. Inside the shadow box I secured sand and a couple of large seashells. Crushed abalone represented water. Thus, I had created a three-dimensional board.

Santa's gift was a tremendous hit, and when the tournament Chessmaster heard about it, he requested we bring it in. At the end of the next tournament I quietly set up in the lobby. I was nervous. I respected the Chessmaster. Would my labor of love appear to him the equivalent of a kindergartener's macaroni noodle masterpiece? Well, no matter, I decided. My daughter loved it, so it was a success.

When the master sincerely declared the set I had created "the most beautiful set I have ever seen", I was blown away. The most I'd hoped for it was "neat" or "interesting". He encouraged me to create others to sell at tournaments. I agreed, but had doubts about my ability to keep sets creative and interesting. Also, would I find the detail work tedious if I were creating for money instead of love? I decided to test the waters with a set to be donated as a prize at the next tournament. For this set, I chose a savannah theme. Animals purchased atop wooden spools, wrapped in zebra print representing white pieces and leopard print for black. The squares on the board w're gold, and the scene below featured a rock outcropping, wild grasses and a watering hole. It was awarded to the player who had most improved, and the reception for my work was humbling.

Since I've made a career working with dogs, the next logical set for me to create was cats versus dogs. During the pandemic I found myself with the time to accept commissions, and I've created sets to include fairies versus gnomes, a dinosaur set and gems vs. geodes. When life becomes hectic, I slip off to the studio and unwind in the world of whatever I'm creating. My patience for the details has not waned, and being in the moment in this relatively new way is refreshing and rewarding. Inspired by love made with love this one little idea has brought joy to many - probably most of all to me.

More stories from Kari Hagerman and writers in Families and other communities.