It's out there at sea that you are really yourself. Vito Dumas 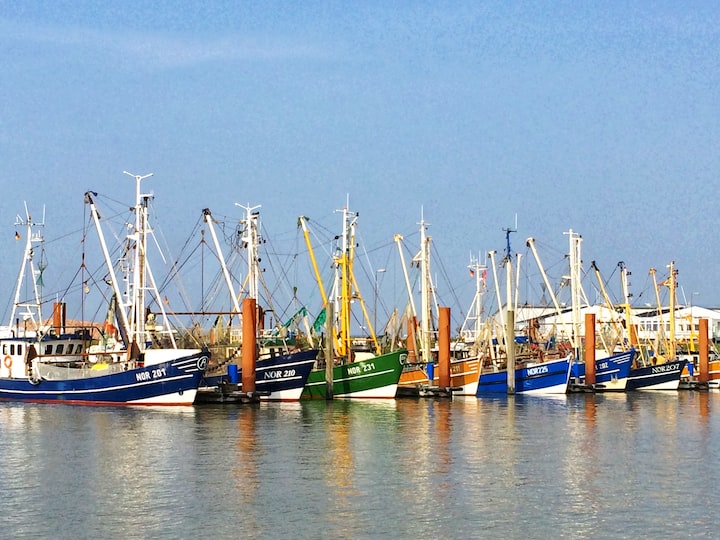 The foggy predawn air misted through the alley as she trudged amongst huddled shadows, other fishermen, headed to Wharf Street. Sam, short for Samantha, had awakened an hour before sunrise, gathered her gear, and headed for her first day with her Uncle Trey as a crew hand. There would be no pay as a fisherman’s apprentice, except the experience.

She had waited for years for this chance to become a part of the family business. They had one rule, graduate from San Diego High Schools Vocational Center maritime course, and apprentice for a month.

Like an artificial sun, stark white light from the trawlers held the alley's darkness at bay as Sam stepped onto Wharf Street. The other shadows stepped out of the side streets and transformed into men and women she had known since a child. They all walked to the docks. Her father, if still alive, would be proud she had chosen to follow in his footsteps. He had called her Captain Sam since she'd been born and expected her, like him, to command a trawler someday.

Onboard the Vintage Catch, the family's large fishing trawler, she stowed her gear in the pilothouse, sought out her Uncle, and found him in the galley. Void of eye contact, he nodded his head toward her in acknowledgment of her presence. Trey and her father had been partners until the day of the accident at sea three years ago. On her twenty-first birthday, she would take her father's place as a partner with the company.

"Ready?" he said and handed her a mug of coffee. The rich aroma roused her nostrils, and the harsh liquid burned her tongue delightfully when she sipped it. Sam sensed her Uncle didn't want her here ever since he tried to talk her out of the Maritime training.

Samuel, Captain Sam to the village, arrived at the tavern a few minutes before his brother Trey and claimed a booth in the back for its privacy. The commercial fishing industry had become difficult, and the payments on the Vintage Catch were three months overdue. The bank had called their note due, and by Friday, the Twin Brothers LTD would fold. Sam and Trey were adopted brothers since the age of six. Trey, a fiery redhead, born an Aries, and Sam a Virgo, calm and consistent. They often disagreed on their business.

The redhead entered the tavern, like a squall off the coast, and dropped into the booth.

"Hey Trey, Smothers called, we are out of time. The bank board met today and the boat will be repossessed on Friday if the payments aren’t made."

"Don’t worry bro, we will have the money by then one way or the other."

"Trey, we talked about this before, we will not set gill nets in the shallow waters. It's illegal for a reason."

"Sam, you and I both know where the Halibut and White Bass are and I will do what I have to do to get us out of this mess."

First light emerged across the horizon, and Samantha stood on the bow as the salt air slipped across her face. The Vintage Catch plowed its way across the harbor and the shoreline shrunk behind her. Tears from wind and emotions welled into her eyes as she thought of her dad's favorite quote by Vito Dumas.

It's out there at sea that you are really yourself.

Determined to pick up where he had left off in his love of the sea, she would learn what that meant in the days ahead. She swigged the last bit of coffee from the mug, wiped her eyes with her sleeve, and turned to the stern to begin work.

The first few weeks had been difficult, and the glory of the first days faded as she arrived home every night sore, exhausted, and reeked of dead fish. The crew members gave her leeway and grew to respect her basic knowledge and willingness to pull her weight. Jorge, the first mate, showed her duties of loading catch into the hold and keeping the decks clean after each haul.

She observed Trey's few words to her and his creepy long stares while on the water. He acted like two different people. Late one afternoon, the decks cleaned spotless, Sam stored the cleaning gear and hoses.

"You call this deck clean!" Trey said, "Get the hose and gear back out and start over."

"You may think because your family that you can do slack work but this won't cut it. Understand?" he said, "In fact, don't come aboard tomorrow, stay home and decide if this is what you want to do."

The fury on Trey's face elicited a meek reply from Sam as he turned and left the boat.

Sam walked to the tavern confused by her Uncle's afternoon behavior and wondered if she knew him at all.

A week earlier, Sam had passed the Coast Guard Seaman's exam, received her license, and became a paid member of the crew. Jorge and the crew celebrated with a meal for her and beer or two for them.

The other four crew members glanced at each other.

"Captain Sam, I like the sound it," Johnnie said. He was usually quiet, but the beer did its work.

"I miss your dad, our Captain Sam, he was a great man. Things sure were different when he was alive."

"What do you mean, Johnnie?" Sam asked.

"Johnnie, just shut up and go home. We are out early again."

They left the tavern, and each went their separate way. Sam, curious, turned around and caught up with Johnnie.

"What do you mean things were different Johnnie?"

Johnnie stopped walking and looked her in the eye.

"We didn't set our gill nets in the shallow waters illegally as we do now. Captain Sam wouldn't allow it."

"By law, we can only set the gill nets in depths more than three hundred and sixty feet because of the destruction to the ocean's ecosystem. Turtles, sharks, and other bycatch are destroyed and wasted in massive nets. It has made them vulnerable to extinction."

"Trey enjoys it when Bycatch gets snagged and killed. He says it makes him the top dog predator on the planet."

"We haven't run lines in depths less than five hundred feet since I've been on the crew," Sam said.

"We are behind on our quota, tomorrow we will."

"Johnnie, why is Trey so angry all the time? When we are at sea he transforms into someone else."

"I shouldn't ask Sam but, what do you know about the day your dad died?"

"The boom collapsed and struck him unconscious, he fell overboard, and drowned. What does this have to do with what I asked you?" Her voice pitch almost raised an octave.

Sam's heart raced, and her throat became dry, and she stared at him.

"Johnnie?" she demanded. "What do you know?"

Sam couldn't sleep and rose earlier than usual and headed for the docks. She stowed away in the lower storeroom while the trawler moved out to sea. She heard the engines stop and came up on deck. Johnnie stood aft and busied himself with the gill net weights.

Jorge saw her and said, "What are you doing aboard? You're supposed to be off today."

Sam checked the depth meter, and it read two hundred and eighty feet. She knew they weren't in federal waters. Captain Trey stepped out of the pilothouse, and his face lit with rage when he saw Sam.

"What are you doing here? I’m Captain of this ship and ordered you to stay ashore. You have broken maritime law and you are a stowaway. Jorge, take her below and lock her in the supply closet."

Trey stepped forward and grabbed Sam's arms, and she jerked away.

"You lied at the inquest." Sam punched him in the chest. "Did you kill my dad for the insurance money?"

Trey snatched her arm and swung her into a chokehold.

Johnny had moved behind Trey with a ten-pound gill net weight.

"I am the authority on this boat and I'm locking her in the storeroom. I own this company and you don’t know what you’re talking about," Trey said.

Trey feinted towards the deck stairs, reversed direction, and shoved her over the port rail as Johnny struck him in the back with the weight. Sam plunged into the rolling swells first and then Trey.

The unexpected impact on the water knocked the breath out of her lungs, and she fought not to inhale the seawater. Though her lungs and eyes burned, she stabilized her body, kicked her feet, and rose to the surface. Sam sucked in the fresh air as her head cleared the water.

Strong hands gripped her throat from behind.

"I'm going to kill you, you meddling bitch," Trey screamed from behind her and pushed her head under the surface.

Sam jammed both elbows into his stomach and broke free. She swam away from him, thirty feet, and turned to face him. Saltwater sputtered out of her mouth as she struggled for a clean breath. Trey swam towards her.

"He was weak, always weak, like you. He would have let the company go under with his ethics, so I put him under instead."

Johnny aboard the trawler yelled. "Shark," and pointed over their heads.

Sam turned her head to the right. A dorsal fin plowed the surface and headed toward them.

She slipped under the surface and estimated it was a sixteen to eighteen-foot Great White. Its distinctive wide jaw and multiple rows of serrated teeth rocketed straight toward them. She resurfaced.

Her Uncle Trey turned his head to the left and back to Sam.

"Let the sea be my judge Sam, it won’t kill both of us," he said as the dorsal fin angled toward Sam.

Sam stopped kicking her feet and went dormant into a dead man's float. The shark closed the distance to her from fifty to forty to thirty feet.

Trey swam for the trawler as Johnny and Jorge tossed gill weights at the shark.

Twenty feet and close, the Great White, drawn to the frantic movement and maybe the hate, veered toward Trey. Within seconds the prince of the ocean, with its powerful jaws, snapped its precision teeth, thrashed with machine strength, and with Trey, disappeared into the depths of the sea.

Jorge and Johnny pulled Sam from the water and radioed the Coast Guard.

A week passed, and Sam sat on the bow of the docked Vintage Catch. Wrapped in a blanket to ward off the cold, she whispered.

"Dad, I think this trawler will make a great dive boat," she whispered. “We will rename her the Vintage Diva. Also, you and Dumas were right.”

It's out there at sea that you are really yourself.

Since reading Tolkien in Middle

school, I have been fascinated with creating, reading, and hearing art through story’s and music. I am a perpetual student of writing and life.

More stories from Scott Wade and writers in Earth and other communities.