Jellyfish and the End of the World

How A Brainless Sea Creature Could End It All 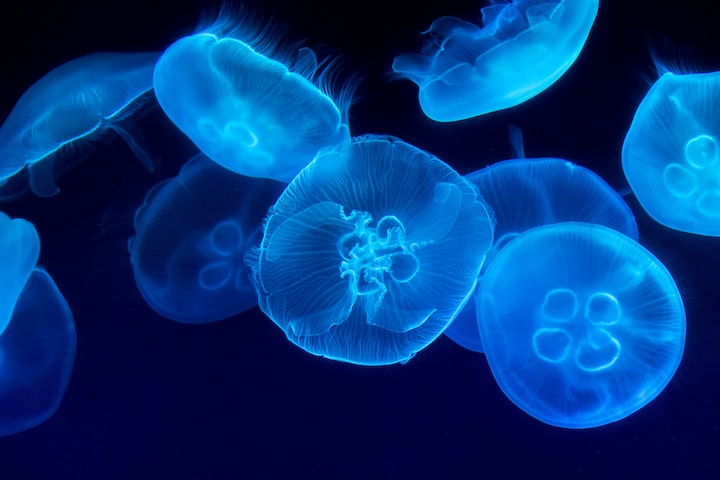 Photo by Marat Gilyadzinov on Unsplash

They may be brainless, but jellyfish could wipe us out if they had one particularly fruitful breeding season. With fewer and fewer predators, jellyfish are thriving. This is because of overfishing and hunting of the creatures who help maintain balance in the ocean. These stinging blobs could eliminate humans and other species without laying a single jellied tentacle on us.

A box jellyfish can stop a human’s heart in 2 minutes, which is scary, but it more than likely won’t cause Armageddon. Given what we know of jellyfish and non-human animals, the attack won’t be with malicious intent. It will be a monster of our own creation. We can call it Climate Change’s monster. “It’s dying! It’s dying!” The waters are warming and it’s impacting every critter in the sea, which impacts us, landlubbers.

If I had known how important phytoplankton is to our well-being, I probably would have been cheering more for the Chum Bucket than the Krusty Krab. These microscopic algae play several vital roles for our planet and its creatures. They feed almost everyone in the sea, and if you’re looking at the food chain itself, you could say they feed the entire planet. From the microscopic to the largest animals in the known universe.

Dinoflagellates are one of the two classes of phytoplankton, and these fellas don’t just sit around and wait for a current to grab ahold of them. No, they whip around their tiny tail, flagella, to locomote around the vast water plains. The other class, diatoms, may be rigid in structure, but they’re chill as the currents take them where they will. Much like their terrestrial brethren, both are self-feeding and rely on the sun for photosynthesis to occur.

Um…Why should I care about tiny algae?

Do you enjoy breathing? Well, I do. Arguably most creatures enjoy breathing, even if most of us don’t really think about it all that much. Somewhere around 78% of oxygen comes from the ocean. A large portion of that comes from the tiny algae hypothetical person isn’t sure they should care about. The big fuss is always over the rainforest and absolutely it needs protection, but we should also concern ourselves with what is happening in the oceans. Trees provide around 20% of our oxygen and the other 2% are from various other sources. Now the ocean is telling us, “I brought you into this world and I can take you out.” and she means it too.

At sea level, the oxygen levels are right where we need them at around 20–23%. The optimal range for humans is between 19.5–23%. The lower those levels go, the more difficult it becomes for our bodies to properly function. If you’re not acclimated to lower oxygen levels like a mountain climber would be then at around 15% oxygen, you may get altitude sickness, which comprises nausea, headache, and fatigue. At 10% you will probably pass out. Any less than that, your body will begin focusing on getting blood to your brain, meanwhile pulling blood away from less vital organs. Over the long-term, it could mean organ failure and/or brain damage. You could live until the stress from how hard your heart must work takes its toll and you suffer cardiac arrest. Most people who climb Everest can only breathe without a mask for a few minutes.

Not only do phytoplankton provide oxygen, but part of the process is actually the removal of around one-third of atmospheric CO2. They absorb it into the shells and sink to the bottom of the ocean, locking it in for many years, which can cause dead zones, but that’s a problem for another article. The CO2 absorption from the atmosphere is just as critical as the oxygen released into it.

Well, you’ve terrified me, but what does this have to do with jellyfish?

Because of overfishing, hunting of sharks and whales, and animals such as sea turtles seeing premature deaths because of nets and other plastics they mistake for jellyfish, they have fewer predators each year. For an animal that hatches thousands at a time, not having predators can be a problem for maintaining natural order. Time may be on our side since they typically only live around 6 months with some species that live longer by reversing the aging process (see: Immortal Jellyfish). They are passive hunters with a prodigious appetite, especially for phytoplankton. They scoop the phytoplankton and fish who pass under their tentacles and into their mouths at the bottom of the bell.

Warming waters have already interfered with phytoplankton blooms, which have decreased by 40% globally since 1950. Jellyfish can survive and thrive in warmer waters and less oxygen, but the predators who hunt them cannot. Between the rising amounts of jellyfish and a decline in phytoplankton, we may struggle to breathe. In fact, we may experience oxygen levels the equivalent of the top of Mt. Everest by the end of the century according to Professor Sergei Petrovskii a professor of Applied Mathematics at the University of Leicester.

*To be clear, he does not write about jellyfish. The tie in is based on other sources listed below.*

What can be done?

Before you grab your nets and start scooping jellyfish out of the water, Spongebob. There aren’t any scientists panicking about them at this moment. It’s one of the less likely end of the world scenarios we have in the line-up. However, we need to pay attention to our oceans and waterways. They are life. We can’t let corporate greed kill us. Make no mistake, Earth will be here long after us and she will rebuild what we destroyed. If we want to save ourselves we have to come out against overfishing. These large nets often catch and inadvertently kill other integral animals such as sea turtles. We have to reduce our carbon emissions as well (looking at you, multibillion-dollar companies). The ocean warming up even a few degrees can make such a vast difference in glaciers, coral reefs, fish, and yes, phytoplankton. We have to reintroduce predators while not taking away most of their prey. They also need a chance to reproduce. We need to stop trapping and killing animals we don’t understand. The only reason we need human intervention in nature is because of human intervention in nature. Given time, nature will restore herself but she needs space from us over-exploiting every resource she provides.

More stories from Ryan McCombs and writers in Earth and other communities.