I did love him, in that mad, bodily way only a teenager can. And you know about that, don’t you? 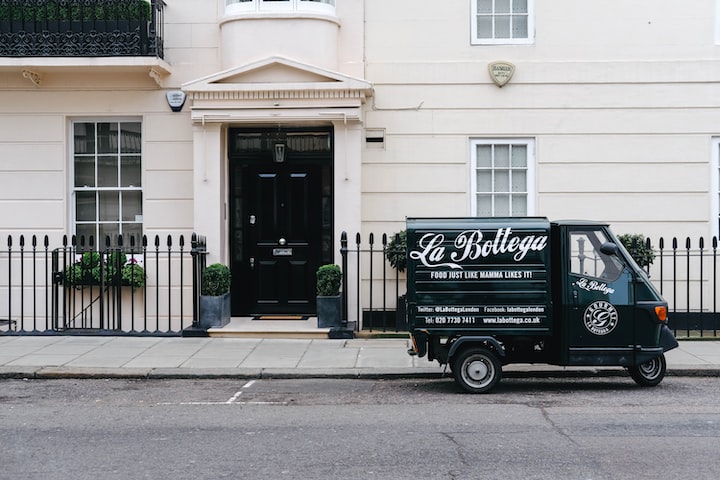 Photo by Aaina Sharma on Unsplash

Mrs Brizzi was the name she went by when I knew her — Breetzi, pronounced the Italian way with a rolling ‘r’, because that’s how her sixth and final husband, a handbag mogul from Milan, pronounced it before he was crushed to death by a bull that escaped from a leather farm.

Every evening I climbed the steps to Mrs Brizzi’s Belgravia townhouse. I stood waiting between two potted shrubs sculpted — inexplicably, into orbs, cradling a steaming cardboard box that contained her supper. Every day the same thing. A square of pan-fried hake with a side of steamed tenderstem broccoli drizzled in garlic butter, no salt. The preciseness of this order reminded me of my mother’s anorexia at its worst. She ate nothing but cucumber. Dozens of them, leaving the films like shrivelled condoms on the carpet by her bed.

“I’d like you to leave your job at Mr. Zografos’s restaurant and come to work for me,” Mrs Brizzi told me brusquely one evening as I passed her the take-away box. Her nails were painted blood red, bejewelled rings winking from every arthritic finger. “You’ll find my terms very agreeable, I should think. I had my solicitor draw up a contract this morning. Would you like to see it?”

She was senile. Of course, so many on that street were. Belgravia seemed to breed eccentric, rich old ladies in varying states of cognitive degeneration — but no matter how many I met, I never warmed to them. They liked me though, because I was quiet and polite. I listened to them. What else did they have to do all day besides shuffle around their mansions? Whether you had money or not, it seemed to me that’s how life always ended. Stuck in the same old loop, with everybody else going on without you.

“Don’t look so anxious dear. I may look like a batty old fruitcake but I’m quite sensible really. Come in, won’t you? My father used to say only con men and religious folk conduct business on doorsteps, and neither of us have the facial hair for that. Although I am getting there, I must admit.”

I told her I needed to get back to work but I found myself moving towards her regardless. I stood on the polished black-and-white tiles of her hallway looking about in amazement. A lifetime’s worth of art, memorabilia and travel souvenirs were mounted in various wooden display cabinets and bookshelves along every wall. It was like a backroom of a provincial museum. No organisation, no theme, no curation. Just stuff, packed into every available crevice, begging to be examined.

“Disgusting, aren’t I?” She said, smiling as she beckoned me to follow her past the sweeping staircase towards the back of the house. “It's a sanitary mess, I assure you. Professional cleaners come twice a week. They hate me, needless to say.”

She gave off a sweet, musky scent in her slipstream. I pictured an antique crystal perfume bottle with a squeeze ball. Rows and rows of them, probably, on a French dressing table that she’d sit at every morning to pencil on the high, theatrical arches of her eyebrows. I wondered if she had children and grandchildren. Somehow I doubted it. She didn’t look like a woman who’d spent any time cleaning up bodily fluids.

There were bookshelves lining the kitchen too. Hundred-year-old recipe books stained with ancient gravy rings. I itched to leaf through them. I felt that old books held two stories: one told in print, and one in the stains and tears of the pages themselves. Mrs Brizzi set her box on the table, poured two glasses of pink wine and handed one to me.

“There’s never been anyone quite right for the job,” she said, as though there’d been no break in the conversation. “And of course it’s out of the question for me to do it. Mmm you must try this Rose dear, it’s from my fifth husband’s wine collection. I won his entire cellar you see, as part of the divorce settlement. An extraordinary collection gathered over many years from all corners of the globe. Not that I’ve ever cared too much about wine beyond the pleasant floating sensation one gets from devouring a bottle or two. Don’t feel sorry for him by the way dear. The man was a heathen. He burned my unfinished novel on a bonfire in the garden, can you believe it? I’ve published three novels in my life but this one was different. I put my soul into it; my secrets. It was my masterpiece, my raison d'etre! He read some of it, you see. The part about — well. My fifth husband was an awfully jealous man. Isn’t love a strange thing dear? It’s like milk. Delicious until it sours, and it always does.”

Her charcoal-lined eyes took on a curiously transparent quality, as though a light had gone off.

So she was a writer. I supposed it made sense, with her floaty clothing and collection of books and husbands.

“You must know a lot more about love than I do,” I said, hoping she wouldn’t ask me what I did know. I was fourteen when I first fell in love. He was tall and broad-shouldered with kind eyes that made me feel seen for the only time in my life. Of course he was married, and also my history teacher. Nothing happened. Mine wasn’t that sort of story.

She watched me closely as I took a sip of wine. It was cool and faintly sweet. Nicer than the five pound Sauvignon Blanc I bought with a KitKat every Friday night from the corner shop. I wondered how much it was worth, how many hours I’d have to spend delivering hot meals to old ladies to afford a bottle like that. Her eyes narrowed and she leaned in towards me, as though finding some blemish she wished to correct.

“What a lovely colour you are, dear. What is it — Moroccan? Tunisian?”

Inside I laughed. They were always interested in guessing my heritage, the rich old ladies of Belgravia, as though I were a puzzle to be solved.

Already the wine was trickling into my bloodstream, running heat down both of my arms.

“Extraordinary,” she muttered, nodding. “How extraordinary. I always wonder. Do you feel it, in your blood? The distant pounding of African drums from your ancestors?”

“No. Sometimes I hear the distant bleating of Welsh sheep though.”

She laughed again. It was a full-bodied laugh. Uninhibited and unapologetic. I felt an intense jealousy that took me by surprise. Every day I kept my true feelings reigned in, afraid that the tiniest leak would cause it all to collapse - the stable life I’d built in the city saving up. I wanted to see the world, to see the cathedrals and museums and galleries I’d only ever read about. Of course in reality I’d have to spend it on rent or mum’s phone bill, but the dreaming kept me going. Rich people didn’t have to pretend, or save, or wait. They didn’t have to be anything other than what they were.

“My mother was Guajarati. My father was a colonel in the British Indian Empire. I won’t bore you with the details of their love story but it lasted a lot longer than any of mine. Sixty-five years, in fact. Can you imagine loving one person for sixty-five years?”

I looked at Mrs Brizzi. She was interesting and she knew it. But was she a good person? And what did that even mean? Was I good? I thought of my mother and her cucumbers and the way I couldn’t help her. I left her to go to university, crying in bed, her skeletal body no bigger than a child’s. And now I was dreaming about leaving her again.

Mrs Brizzi noticed me watching her and smiled.

“I don’t look half Indian, I know. She was very light-skinned, my Mata. And of course Indians are classed as Caucasian too, did you know that? Anyway what does it really matter? Don’t you want to look over the contract? And how about a refill? Good, isn’t it? Tastes like revenge.”

She filled our glasses and handed me a piece of paper. Humouring her, I scanned it quickly.

She pretended not to hear.

“What I need, you see, is someone to clear out a room for me.”

I’d never told her my full name but here it was, typed into a legal contract. Did she ask the restaurant about me?

“There are removal companies for that,” I said.

“I don’t want any old Gary rifling through my room. No. I’ve been waiting for the right person for this job. The room contains some precious items that I — ”

“I killed my first husband.”

Mrs Brizzi looked very old all of a sudden. Deflated, her eyes once more eerily empty. I couldn’t work out if it was a real confession or a way of keeping me there. Either way, it worked.

“I live in guilt too, Ivy.” Her voice was barely a whisper. Her strange, empty eyes locked onto mine. “I know about your mother.”

That did it. The woman was a crook; she was mad, dangerous. I began to back away.

“Wait!" she said, a horrible note of desperation in her voice. "You dropped this last night."

In her hand was a small black notebook. I frowned. I knew that book. It was my journal; I carried it with me everywhere. I’d been so busy with work and mum that I hadn’t even noticed it missing. My anger was so acute I could barely speak. That book contained everything. Everything I tried so hard to keep quietly inside — and she’d helped herself to it, to me.

I thought about attacking her, wrestling her brittle old body to the ground, thumping her skull against the kitchen tiles.

“Where does cause and effect start and end? I didn’t give him the rope, Ivy, but I broke him. By loving him, by promising myself to him and then leaving, I broke him. He was a sweet man. Simple, but sweet.”

“He left a note. He said if he couldn’t be with me then he didn’t want to be anywhere. I was only nineteen. But I did love him, in that mad, bodily way only a teenager can. And you know about that, don’t you Ivy? Just — the world looked so big and enticing from where I stood. I had to go and taste it. Touch it with my own hands, do you see? Here. I’m sorry for reading it. You know, you’re a very good writer.”

I snatched the diary.

“The room in question is full of his things. For sixty years, through all those other husbands, I kept it, afraid that if I didn’t I’d be cursed. Perhaps I already am. You know dear, it’s not right to keep yourself wrapped up in a little book like that. I’ve catalogued parts of myself in books all my life too. But at some point you have to learn to live. Your mother isn’t your responsibility. She’s her own woman, just like you.”

Outside in the walled orchard, a blackbird began to sing. I could smell the garlic butter from Mrs Brizzi’s untouched dinner.

I'm an ex-20-something British copywriter with a love of fiction, guinea pigs and things that make me laugh, like Bill Bryson and relatable memes about being an introvert.

More stories from writers in Criminal and other communities.