by Shannon Sharp about a year ago in fiction

When The Hunted Eats The Hunter 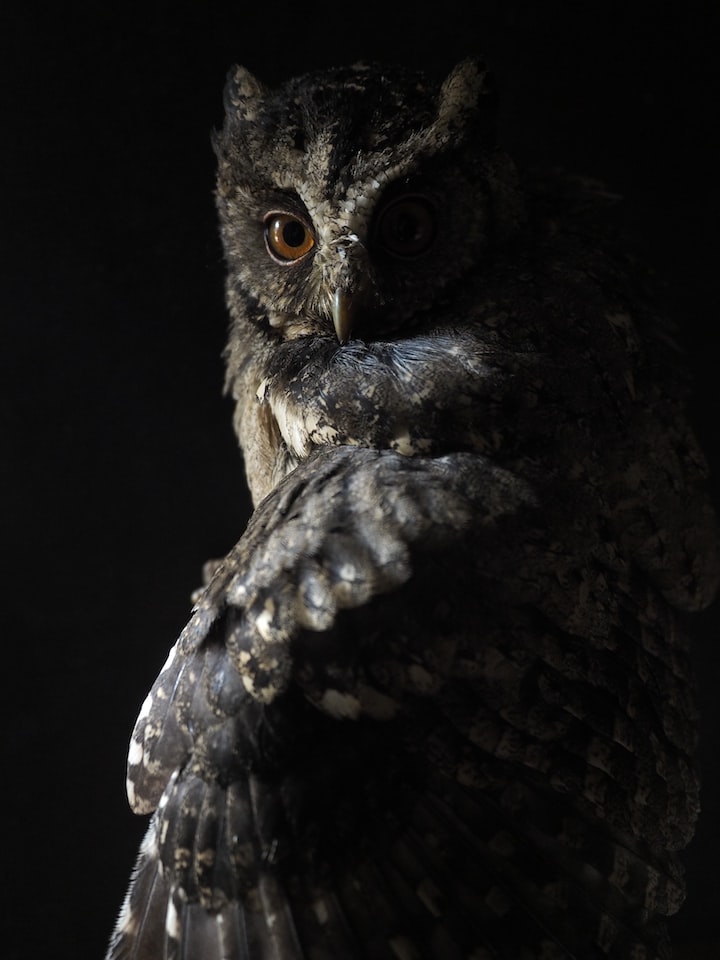 Photo by Agto Nugroho on Unsplash

Joel Ornstein, if that was even his real name, had been following a woman he came to discover was called “Angelina” for the last three months. He had been standing in line at the bank when a teller opened a new window, and in the rush to be first, had run straight into her. Her beauty had flashed at him in an angry grimace as she looked at him, and Joel had apologized and politely motioned for her to go ahead of him. Joel had trailed her from the bank and discovered she was a yoga instructor at a nearby studio. He had been watching her there for over a month before following her home one night at a great distance. He was pleased to discover she lived within walking distance from her studio. After determining where she lived, he had gone back home, and the next morning, after he watched her enter the studio and start her first class, he made his way back to her home.

He approached the door as if he was meant to be there, and looked around briefly. No one on the street seemed to even notice his presence. This was too easy. People were good at ignoring things in this day and age. As long as it didn’t affect them, it didn’t matter to them. Joel looked back at the door, and looked down. There was a doormat that said “Wipe Your Paws” and Joel scoffed as he lifted all of the corners. No key. Joel looked at the rest of the items on the small porch. There were three potted plants that contained Petunias. Joel carefully lifted each plant, and under the center pot, there was a door key. Joel smiled. People are so predictable. Leave a key under a potted plant in case I get locked out of my own home. How intelligent. Joel felt a bit of anger at Angelina for making it so easy. Anyone could have come and broken into her home. Joel picked up the key and slid it into the lock; he entered and found his way straight to the bedroom, where he always started.

A queen bed was made neatly in the middle of the room, pushed up under the windows. There was a bedside table with a book lying on its side. Joel glanced at it as he walked toward the closet. Some stupid detective novel. He opened the closet and looked around. Normal girl stuff. Not as many shoes as he would have expected. He walked over to the dresser and opened the drawers. Mostly functional panties, nothing very racy at all. Socks, pajamas, workout clothing. Joel felt bored. He had expected something more exciting. Joel looked around the room and realized that he had not seen a single framed photo. The last woman- she had lots of photos all over her small house. Framed photos filled the walls and any open space on a counter top. Friends, family, animals, whatever. The crap Joel assumed she must have cared about. Joel found this odd. He swung around in a large circle, looking all over the room. Not a single photo. He walked back out to the hallway and went back downstairs, paying more attention this time. No photos on the walls of the stairs. No photos on the fridge. No photos in the living room. Joel walked through the entire house, although it wasn’t very big. There was not a single photo hanging on display in the home. Joel felt this was odd. Since he had been following Angelina for the past month, he knew she had lived here at least that long, so not an issue of not having the time yet. Maybe she had no one that she cared about. Or no one that cared about her. Maybe no one that would miss her for a few days, or know where she lived to go check on her.

This ritual continued almost every day in the following month. Joel would either watch Angelina from the coffee shop across from the yoga studio, or he would go spend some quiet time in her home.

The next two months were the courage building months. Joel worked out twice as hard as he normally did. He sat and thought about Angelina late at night, finding anger welling up inside of him at the thought of her and her perfect little existence. Her existence needed to be snuffed out. Joel could feel this like it was meant to be. He was being told again, that it was time. He had done his homework. It was time for Angelina to finally meet him. He was ready, and he was prepared. He had the element of surprise, and he was experienced. The police had no clue who he was, and had never gotten close to him. Angelina had been going about her normal days, never noticing him, never caring about her surroundings or the people near her. It was time for her to learn of her deadly mistake. Her inability to protect herself. She had basically brought this upon herself.

The next night, Joel watched Angelina as she locked up the yoga studio at seven, and headed home. He watched her go down the street, and he went the opposite direction. He went to his BMW and sat in the driver's seat, his hands gripping the wheel. He finally reached into the back seat and grabbed the black bag he had brought with him. He had worn black pants today, and he sat in his car and switched his white t-shirt for a black, long sleeved thermal shirt. He hated the heat it brought, but it was more protective against any scratches. He sat in his car until eleven o’clock, brooding. He was ready. His body trembled with excitement. He finally turned the car on, and drove towards Angelina’s house. He parked across the street from the house, and looked. The lights downstairs were off, and only one was on upstairs, which he knew was the bedroom. She must be reading. He sat and waited for another hour, then the light finally went off. He waited another hour. Joel reached into his bag and grabbed two pairs of latex gloves. He slipped them on, one at a time. He then reached into the bag and pulled out a pair of boot covers, like the ones worn on all the cop shows on TV. He slipped those on as well. He checked his bag for the hundredth time that night. Rope; slip knots already tied and ready to be pulled tight around flesh. The six inch hunting knife, sharpened to slice skin like butter. He was prepared. He slowly got out of his car, and left the key on the front driver’s side wheel. A low call from a barn owl reached his ears as Joel stood from placing the key. He turned and looked up into the tall Oak tree. It was too dark to see, but he heard the low, mournful call again. Joel slung his bag over his shoulder and casually crossed the street, as he had countless times before tonight. He walked straight up to the front door, and bent down to retrieve the key. It was in the normal spot, and Joel slowly slid it into the lock. He turned it quietly. Not a peep. He opened the door carefully, and closed it silently behind him, turning the deadbolt gently. He walked to the stairs, his ears straining for any hint of noise: nothing. He started his way up the stairs, avoiding the second landing as he knew it was loose and squeaked. Once upstairs, he paused again, listening. Nothing. This was not going to be as exciting as he thought. He had hoped she would catch him before he was already over her in her bed while she slept. Joel slowly walked to the bedroom. The door was wide open, and Angelina was lying on her side, her back to the door, one of her hands flung out and the other resting up under the pillow under her head. Her breathing was slow and rhythmic, indicating she was sound asleep. Joel lowered his bag to the floor, and retrieved the rope and knife. He bit into the knife handle with his teeth, allowing his hands to be free, and slowly stepped to the side of the bed. He watched Angelina sleep. She was indeed so beautiful that what he was about to do could almost be considered a shame. But taking her would bring more attention to his murders because of her beauty. And in all honesty, Angelina should have been more careful. Joel held the rope in one hand, and slowly lowered his other hand toward Angelina’s mouth, ready for the quick struggle that would happen, and then she would surrender. They always surrendered. Joel placed his hand tightly over Angelina’s mouth, and her eyes shot open, looking directly at him. Joel was slightly taken aback. Normally the first look was straight up; not over and to the side, directly into his eyes. She did not struggle like all the others. Joel heard a familiar click, and looked in the direction the sound had come from, right beside Angelina’s head. Her hand that had been under her pillow was now free, a revolver in her hand, pointing directly at him. Joel was taken aback. He dropped the rope and grabbed the knife from between his teeth. The blast that followed echoed through the house, and Joel stood where he was, shocked. Had she missed? He didn’t feel any searing pain, not what he thought he would. He went to move with the knife, but Angelina had already escaped the bed, and was holding the gun firmly in both hands, her right finger along the trigger, her left hand cupping the grip of the revolver, supporting its weight, her legs slightly splayed. She knew what she was doing, and she was pointing the revolver right at him. It was at this moment that Joel felt the pain. He looked down and saw blood spreading across his chest, soaking through his thermal shirt. Thermal must be absorbent he thought, oddly. Joel slowly backed up and slid down the far wall of the bedroom. He looked up at Angelina, who stood, still holding the gun on him. Her hands did not shake. Joel tried to speak, but instead spit up blood. At this point, Angelina lowered her weapon. She obviously knew she had hit her mark with the first shot. Joel stared at her, and Angelina smiled softly.

“Want to know what you did wrong?” She asked, walking toward him. She stopped a few feet away and crouched down, her eyes staring into his. Joel tried to speak, and coughed up more blood. He managed to nod, and felt his head heavily fall forward. He fought to pick it back up, but couldn’t. He heard footsteps, and felt his head lift straight up. She was holding him by the hair, pulling his head up to look at her.

“You picked the wrong girl.” Angelina said softly as she dropped his head back down. Joel felt his vision start to go black, and he tried to fight it. He could hear somewhere in the distance Angelina on the phone, stating she had killed an intruder. And that damn barn owl outside was hooting again, long and low and sorrowful. Joel wanted to scoff at the joke. Killed him? He had planned and prepared and… “I miscalculated'' Joel mumbled. But Angelina did not look at him, so maybe he had just said it inside his head. Then everything went dark.

"I'd consider myself a realist, but in philosophical terms, I'm a pessimist".