by Rose M. 2 months ago in incarceration

The Death Penalty Should Be Abolished 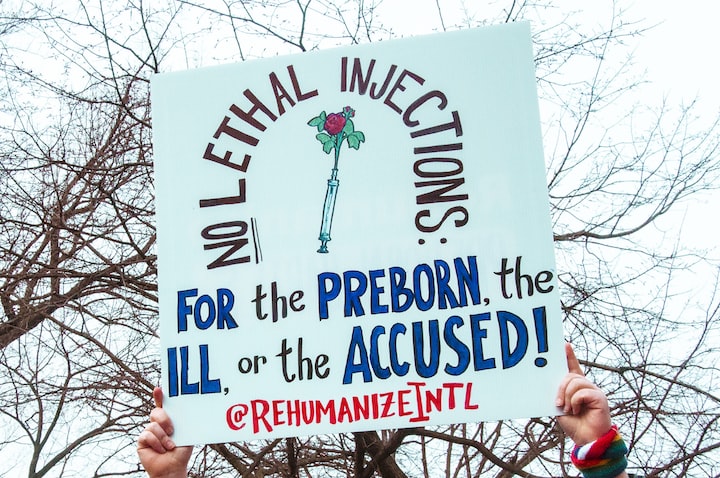 Photo by Maria Oswalt on Unsplash

For those who are against the death penalty it is a clear answer of abolishment. However, many who still believe that the death penalty should be used have a argument to match every reason. One of those reasons being that "If they could take the time to murder others, than we shouldn't spend millions to keep them alive." While, all reasons are valid, this reasoning is something that gets under my skin just because not everyone who kills is put on death row. People who drink and drive for example, are often given time over death row. This then puts into question how much actually gets spent on each inmate for a life sentence, which is about what the average American makes in a year. Which brings into question on whether the death penalty is the cheaper easier option to get rid of the pile up of criminals. Personally, I believe that there is alternatives for many charges other than prison, which costs an obscene amount of money. Meanwhile, sending people with drug charges to rehab would not only help them get better but would also provide more finances. Finances that could go towards taking the death penalty off the table for most if not all cases going forward. Because at the end of the day these criminals aren't just tax dollars, they are also people. People whose lives could later be proven innocent of the crime that they were sentenced to death for. Which brings up the argument of whether or not the death penalty is used for a murder for murder reasoning. Using that reasoning it sounds fair, someone murders someone, they get murdered themselves. However, that then states that the executioner is now a murderer and therefore shall face the same judgement, in which the cycle will never end. The executioner will become the executed and so forth and so on, which disproves that murder for murder is reasonable. For all of these reasons the only argument left is to state that the death penalty is needed in order to keep order. Order that needs a death penalty to discourage people from going on killing sprees, however those who have killed often don't think of the consequence. Many don't even think about the consequence when they are pushed to the edge like that, so taking it off will most likely not cause a rise in crime. So, keeping the death penalty offers few if any pros, when it comes to taking a persons life.

Those against the death penalty have their fair share of arguments, and although I personally am against, I was once for it. I, like many people around me was told that these criminals deserve the death penalty. Although thanks to the recent exploitation of those who are sitting on death row, my mind was changed. As I realized many of them were not just victims of their time, but victims of a broken justice system. Many who sit on death row are those whose race unfortunately played a part in their conviction. As many were given a death sentence even though not enough evidence was provided to kill someone. Evidence that often is discovered after their penalty is completed, in favor of their innocence when it is too late. While, race is not always a factor in the conviction although it does happen a lot. The main reason the death penalty should be abolished is because the justice system is broken. As with the recent death of Brandon Bernard, whose death was mainly seen as a way to fill a quota. This then questions on whether or not the death penalty is only being discussed since the justice system is a failure. Americans have seen people get away with criminal activity based on wealth, race, political status and even gender. It is no longer a standard, it is very much dependent on the judge and the jury, rather than what the law states. So, maybe in a different time, before the justice system failed, maybe the death penalty was reasonable. George Stinney Jr. however is proof that the justice system hasn't been responsible with the death penalty since the beginning. It is a power that carries with it so much responsibility since it is someones life that is being put on the line. A life that can't be returned once its been taken even if they are found innocent after their death. For this reason alone the death penalty should be abolished, these are lives.

Rose grew up in a house inspired by her mom, who is an amazon bestselling author, and encouraged by her father. She always held great interest in both history and all things lifestyle. Her goal for Vocal is to express her opinions.