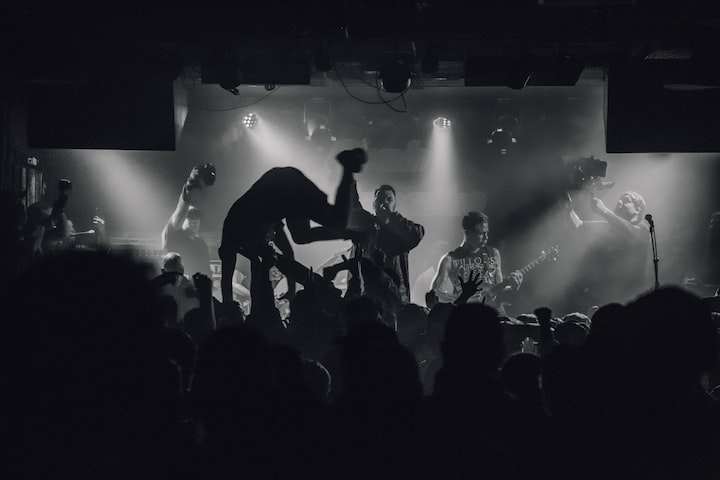 James Shall looked in the mirror. He said to himself, "well, Jimmy, completed another day in the corporate world." Covid had become a friend to his business, though he sometimes wondered how he could keep up the pace. Since the pandemic, his business had bought, stripped, and looted at least a business a week for the last seventeen months. Jackson Markets were now crushed in receivership, and soon his lorries would stop and loot each location for anything worth taking.

He opened the door to leave the restroom; stuck to the outside of the door was a kitchen knife stuck into the door. James looked up and down the corridor carefully but could see no one anywhere. He looked at the small aging piece of paper stuck to the door by the knife. He did not touch the knife; first, he looked at the aging paper and was horrified as he examined the charcoal-colored black spot in the center of it.

He pulled out a tissue and wrapped the knife and paper in it carefully, and moved quickly toward his office. As he stepped through the outer office, he looked at Karen, “Karen, get Ted on the line now, please.”

“I think he went off to the pub,” she remarked.

James stopped in his tracks as he opened his door, “I do not care. Find him and tell him to get to my office now!” He went into his office, slamming the door shut as he did. He placed the neatly wrapped bundle on his desk and went to a small bottle of Mount Gay Rum he had on his shelf. His hands were shaking slightly as he took a long sip out of the neck of the bottle. “Right, whatever bastard did this!” he muttered as he took a second sip.

Fifteen minutes later, there was a knock on the door; James went into his desk and removed a sharp evil-looking letter openerr he had kept for over twenty years. “Enter!”

Ted Knight had been a member of the British Military for over twenty-five years, spending over twenty of those years as a Royal British Military Police member. He had worked with James for the last five years handling issues and strong-arming when required in some interesting hostile business takeovers, but in all that time, he never received a call like the one Karen gave him over ten minutes ago. After hearing James’s voice, he opened the door to find James sitting at his desk with his hair messed, a partially consumed bottle of rum on his desk, a scrap of paper, and a kitchen knife on the desk.

“What’s it all about?” he said to James as he stepped into the room, observing the letter opener in his hand.

“This was embedded in the Loo Door,” said a shaken James as he stood up. “Do you know what it is?” he said loudly as he pointed at a scrap of paper.

Ted pulled out a pair of vinyl gloves from his coat pocket and looked closer at the knife first, a typical kitchen knife, it appeared to be twenty-plus years old. He looked toward the paper touching only the edges and turning it towards himself. He had seen this in the army, particularly in Afghanistan and Belfast, “The Common Book of Prayer, Anglican Church.” He said as he looked closer., “What the hell is going on, Jimmy?”

James went to his window, “Book of Prayer, 1940, I suspect. You see the charcoal mark in the center.”

Ted stood up for a moment and looked at James as he again asked, “What the Hell is going on, Jimmy? Some nut jobs idea of a bad joke, Mark of death or something. Who did you piss off now?”

James turned and said, “Get it checked for prints and all the rest, have my security checked at the flat and the club. I have not seen one of these in forty years.”

“JUST DO IT!” He said loudly. “I am going out will call you in an hour.” With that, James walked out of the office in a hurry.

Ted wrapped up the knife and page and knew something was very, very, wrong. His first thought was to try to stop him, but he knew that would only create further problems.

James never did call Ted back, and after an hour and a half, the telephone calls started. Within three hours, Ted was out looking and had called the police regarding the strange occurrence. James Shall was found dead in a back alleyway near the docks five hours later. He had been dragged by a vehicle, beaten, and a second black spot with the Common Book of Prayer page pinned to his forehead. The prayer for the dead with Jimmy Spider Shall scrawled on it with a charcoal pen.

Wayne Murtle pumped his old German sedan with fuel at a local gas station in a rural area near Chilliwack, British Columbia thousands of kilometers and a lifetime away from the British Isles. Twice while he was fueling his vehicle, he had observed a leather-clad fiftyish gentleman watching him from the doorway of the fueling station. He had the strangest feeling he had known this man from somewhere in his past. But he was not sure of many things since his horrific auto accident thirteen months ago.

He placed the nozzle back onto the pump when he heard a vaguely familiar voice from behind him. “Bloody hell, thought I would never see you domesticated.”

Wayne turned around quickly to see the balding leather-clad pale gentleman standing behind him. “Fergy Anderson?” he said, startled.

“Very good, Wayne, but it is Edward Anderson these days, except for old mates.” He said with a halfway grin, "I am a proper gentleman now."

Wayne leaned again, the pump still in a state of shock. He had not seen Fergy since the days of his youth. He had on occasion communicated online with most of the old crew from time to time, exchanged photos, old jokes, and the odd bit of news. “You look well for an old bastard from Leeds.”

Fergy laughed as he replied, “Heard your brain gone soft or something.”

“One too many concussions, the specialists and experts say. The old memory is great, recent stuff not so good.”

“I was hoping you would say that I need your help. Might save your arse as well.” Fergy said in a somber tone. Fergy looked around before saying, “I will send you a message later in the day and arrange to see you tonight. In the meantime, look on our group chat.” With those words, Fergy moved away and disappear almost instantly.

Wayne drove his vehicle towards the RV Park he called home. Since his accident, the head injury had robbed him of many things: his family. His sudden outbursts, sleepwalking, and headaches slowly had him pushing away anyone who loved him. Now he lived in an old motorhome in what once was an elegant RV Park some thirty or forty years ago. Now it was a collection of fifty or sixty sites all crammed together. Everyone there had a story that they particularly did not want to share, and he liked that very much.

Inside the old motorhome, he turned on his laptop and hoped to get a good internet signal. Somedays, the wireless was great; most of the time, it worked and somedays you could not get a single bar if your life depended upon it. He poured himself some root beer and sat down in Infront of the screen. A few minutes later, he was staring at the old Punkers of the U.K. site. He had not looked for some weeks; he was shocked by several entries; it appeared three different people he knew from his Punk days all died in since August 2021. Three weeks ago, Jimmy “Spider” Stall was the bass guitarist in London in a Punk Band called, “PUKE” in 1979. He was a fair guitar player and even better at swinging his fists and could deliver a wicked elbow to the ribs or chest.

He read and reread the entry regarding the charcoal mark; it took him a while to remember where he had seen it before. His brain struggled to remember such details; then it came to him about twenty minutes later in a blinding headache.

He quickly sent out several emails and a message on the board. As he stood up feeling dizzy, he knew his life could forever be different if he lived through the coming year.

Author's Note- The Charcoal Spot is the first in the

A Fifty something male that enjoys writing short stories, scripts and poetry. I have had many different types of work over my lifetime and consider myself fairly open minded and able to speak on many topics.

More stories from Bruce Curle ` and writers in Criminal and other communities.