Karma in the airport lounge

You can watch planes or watch someone get what they deserve 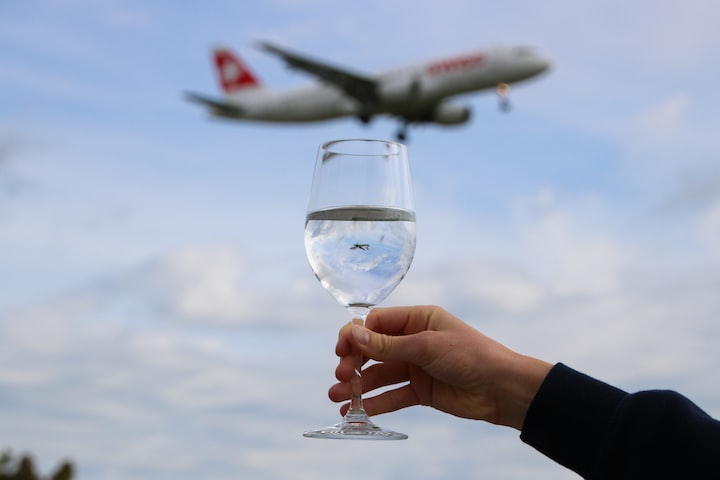 Photo by Ellen Jenni on Unsplash

This is the final page for Mister Robert Weir, passenger flying to Brisbane on Qantas flight QF506. Your plane is fully boarded and ready for immediate departure.

As the announcement echoes through the departure lounge, I take a sip of my whisky. It’s not that often I drink before a long flight, mainly because I don’t like feeling extra groggy at the other end, and because the whisky I get in airport lounges isn’t usually that good. I’ll make an exception because it’s been a rough week, and I was getting exceptionally flustered about getting to the airport today.

One of the things I inherited from my dad was the need to get to the airport early. I’m talking two to three hours before my flight so that if anything happens, I don’t miss my flight. You know, anything like every road to and from the airport is cut and there is an alien attack but not a serious enough attack for the airlines to cancel the flight so if I don’t get there, they take my money. I accept it’s irrational, but at this stage of life, I accept I’m hard-wired that way and it’s not going to change.

No matter how flustered I get, however, I was taught to still be polite to people. One of my mother’s favorite sayings was “civility costs nothing” and that’s very true. I never understood the need to be rude to people, especially those in the service industry.

My thoughts drift back to twenty minutes ago, as I stood at the bar waiting to order my drink. Another passenger had ordered his coffee. He was in his late 50s, overweight, loud, and had a ruddy complexion that made me envious of his liquor cabinet at home. I know that it’s a terrible thing to judge someone from their appearance, but the second I heard his booming voice berating the timid young woman who had apparently messed up his coffee order I thought, "yep that fits".

“Do they not teach you how to make coffee in whatever country you come from?” was the well-thought-out insult he directed at the woman behind the counter. He turned around to see who else might have witnessed his witty exchange. He looked at me with a stupid grin on his face, I tried to let my face exhibit the full level of disdain I had for him, not giving him the satisfaction of any support.

He turned back to the young woman who was clearly shaken, but still able to muster a response. In perfect English, she replied, “Sorry Sir, while I’ve been studying for my master’s in engineering, I have not excelled at advanced coffee making for entitled white men, it has brought shame upon my entire family”.

Now I’m not going to lie, I let out an audible snicker at that. I know that I did because Mr. Rude turned around and stared straight at me. He didn’t have his stupid smirk on his face this time, but I was grinning from ear to ear. The lady behind the bar looked at me with a smile and said, “Can I help you, Sir?”

I ordered a whisky neat, as he stormed off to the service desk. I can only assume to make a complaint about the young lady calling out his entitled racist bullshit. As she handed me the glass with a very generous pour in it, I gave her one last smile and said, “If you need a witness to say that he was a rude ass, send them over to me.” She smiled back and responded, “Thanks. Right now, getting fired from this job would probably be a blessing”.

After a few minutes, I saw everyone’s favorite passenger return and sit in a big chair a few feet from me. He finished his coffee and after a few minutes, his head started to do the nodding thing that older men do when they’re falling asleep. He took a grey sweater out of his carry-on bag. He rolled it up and used it as a pillow. He started snoring not long after, a sound equally annoying as the sounds he would make when he was awake.

Now as I sit here, I hear the latest announcement “Mister Robert Weir, if you do not attend the gate immediately your baggage will be offloaded, and you will need to buy another ticket”.

I glanced back at the snoring lump of a man. It was then I noticed the luggage tag on his carry-on. I noticed that the surname was written in large letters, and I was sure it said, “Weir”. I thought that there was no way that karma could be so immediate. I could see his printed boarding pass resting next to him, so I decided I needed to stretch my legs. I walked a route close to him and saw that the name was indeed Robert Weir.

As I started to walk back to my chair, the announcement came through that my flight was boarding. I finished my whisky, picked up my bag, and started the walk to the exit. Immediately after that announcement, the speakers buzzed again “Mister Robert Weir, the passenger who was on Qantas flight QF506 to Brisbane, your flight has closed, and your luggage is now being offloaded.”

I wished that I could stick around to see his reaction when he finds out he’s slept through his flight. I know that he’ll behave in a superb fashion, maybe he’ll even behave badly enough for the airport police to get involved.

As I walked past the quick-witted young lounge attendant behind the bar, I gave her one last smile. I hoped her shift would last long enough to witness this sweet revenge.

More stories from D-Donohoe and writers in Confessions and other communities.