I mercilessly chopped his hair and he didn't mind at all. 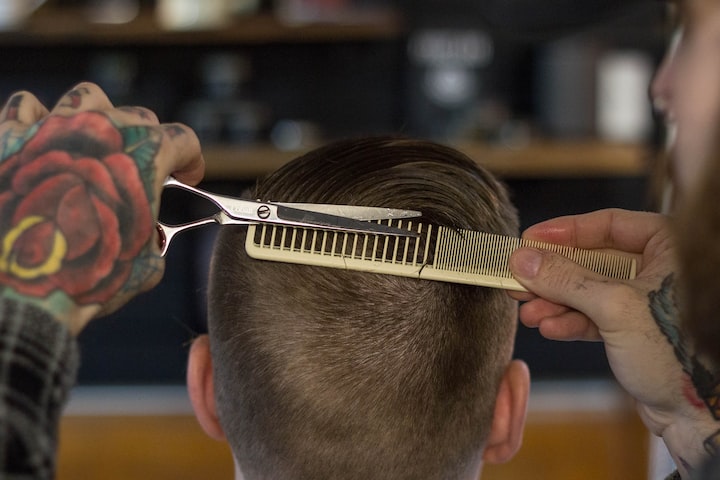 First of all, I want to say that my husband is a courageous man for letting me take him a haircut. Just think about the fact that I never cut hair before. I only used scissors for regular things.

But when it comes to trying new things, I never say no. And if I can't do it right, at least I get the chance to experience it. This time I almost fainted from laughing.

His hair was growing, and everyone except me was telling him to get a haircut. He has gorgeous hair, and I like the way he wears it. But despite this, I said, "Let's cut a little, so you don't look like you have a bowl on your head." I claimed I would just cut a little around the ears, and that's it.

I covered his body with the gown. At that moment, I felt like the coolest hairstylist in the world. Jen Atkin was an amateur compared to me. I started cutting as if I were Edward Scissorhands! A little from here, a little from there, a little from everywhere (this was the moment when he got scared but didn't say a word about it). I didn't even look at what I was cutting exactly. The scissors were cutting so well, and I had the impression that they will make him a super hairstyle on auto-pilot.

At one point, I stopped the mowing to measure the haircut "balance." And the balance was nowhere. Hir haircut looked as if several hedgehogs had made their nests on my husband's head. I burst into hysterical laughter as he looked at me without any surprise. The idea of ​​"just a little haircut" failed instantly. The problem was that I had no idea what I could do to fix the situation. That was the moment when we both took turns from the kitchen to the bathroom mirror until I managed to straighten his wonderful hair. It's good that he works from home and he doesn't have to go to the office. His colleagues cannot see the ununiform haircut on the video calls.

It is clear to me that I have zero experience in the hairdresser's area, but I tried to do my best. From this entire experience, I learned the following:

In the end, it wasn't bad at all to be my husband's hairdresser, and I want to repeat this experience. I will take advantage of the lockdown and practice (as long as I still have a model). And, who knows, maybe Jen Atkin will be a little kid compared to me. I'm kidding, I'll stick to the staff I am good at, but it doesn't hurt to cut my husband's hair as well as possible. This thing created beautiful memories, and we also save money.

👇 I hope you enjoyed reading this piece. Curious to know a bit about myself? 👇

My pen name is Ryan Miller. I am a Linux Sysadmin, writing hobbyist, father, and husband. I mostly write non-fiction on Vocal, Medium, and my blogs.

My day-to-day job pays my bills, but I am not going to lie to you. I am interested in making money with my writing as well. My top earning article on Medium generated 50$ so far.

I don't cross-post everything I write on Medium here, so if you want to follow my entire work (and earn some money yourself), you should subscribe with my affiliate link. I will earn a small commission from your monthly fee, while you don't have to pay anything extra.

More stories from Ryan Miller and writers in Confessions and other communities.