I am Very Asian

by Tiffany Wells 5 months ago in Humanity
Report Story 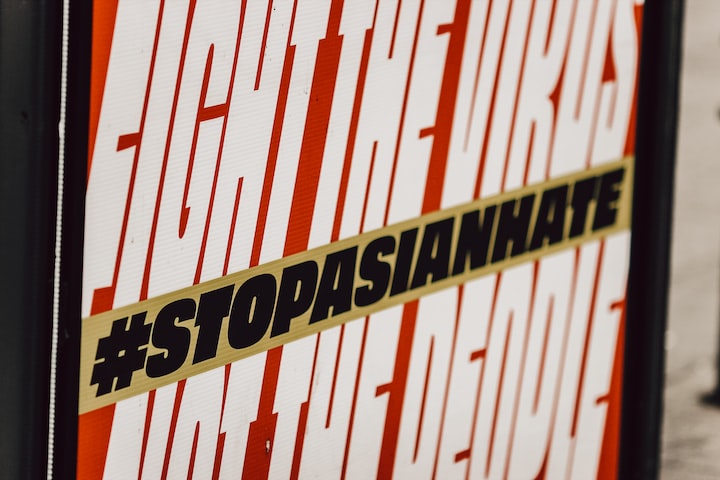 Violence against Asian individuals is on the rise in America due to the coronavirus, and the prospect is terrifying. I am half Japanese, and constantly worry for my mother when she goes out. This worry grew worst when the 2021 Atlanta Spa Shootings took place, and when Captian Jay Baker said the shooter was having a “bad day.” I sat there with my mouth agape and in shock.

The shooter says that he has a sex addiction, which led him to kill eight people, six were Asian. Race and gender played a role in what the shooter did that day. Luckily, according to CBS News, the district attorney intends to seek hate crime sentencing enhancements.

I was always othered for my Japanese side because of the stereotypes that came with it. I was expected to be good at math. I was made fun of for the food that I ate. I did not realize that I was not like my peers as a child because I was seen as a model minority. The model minority is a myth and pretty much says that Asian Americans have achieved a “higher” level of “success.” It also suggests that Asian individuals are quiet, polite, and sexy. We see this with the Atlanta Spa Shootings and also on television. I remember reading "M. Butterfly" it is also known as Madame Butterfly. An Asian individual kills themself because they could not get with a white man. This happens a lot in our media. Asian individuals die because they could not get the love of a white man or they are sex workers.

There has been an increase in hate towards Asian individuals during the pandemic, and I will keep repeating that fact. There was an Asian woman pushed to her death into an oncoming train in New York, but they won't claim it to be a hate crime. The man was just angry at women that day. Shelly Luther, a Texas GOP candidate, tweeted “Chinese students should be BANNED from attending all Texas universities.” I do not see these things talked about. I sometimes see a minute news clip, but then we are back to something different. Am I expected to be quiet and not say anything? Probably. I wouldn't be surprised if that is what is expected of me. Hell, I get nervous just talking to anyone about anything. Which is why I turn to writing because it gives me a voice and I don't have to stare at someone.

I realize that I get nervous to talk about these things. I realize that I try not to cough in public and I realize that people tend to avoid me in the store. I realize that I am Asian, and even though the other half of me is white I will never be seen as white. I worry for my mother who is Japanese. I will lay in bed worried that one day I get the call that she was killed. I start to cry and have to keep reassuring myself she is still alive. I have to text her in the middle of class or call her to make sure she is okay. I'm worried for her because I know she will one day encounter some racist butthole and I might not be there. I then realize that even if I was there, I wouldn't be able to do anything.

I also realize that I will always be made fun of for the food I eat, like Michelle Li who talked about eating dumplings for New Years Day and had someone call in to complain about it. The caller said that the Korean news anchor was being “very Asian.” I remember in elementary and middle school how I was made fun of for eating seaweed because fish pee on it. I would watch as my classmates mixed chocolate milk into their mashed potatoes as they teased me for eating raw fish and seaweed. I wonder now if they eat sushi and seaweed. I wonder if they still mix chocolate milk and mashed potatoes. I wonder if they remember what they said to me.

I sit there with my bowl for fresh homemade ramen and a bottle of カルピス and I realize that I am Asian. I am very Asian and proud. I will not hesitate to cook a homemade Japanese meal for my friends and share with them my favorite drinks. I am not afraid to say my favorite food is curry or soba.

More stories from Tiffany Wells and writers in Confessions and other communities.