The Playlist That Kept My Kids Sane Throughout The Pandemic

by Kayla Lindley 7 months ago in playlist

Sorry these may or may not get stuck in your head. 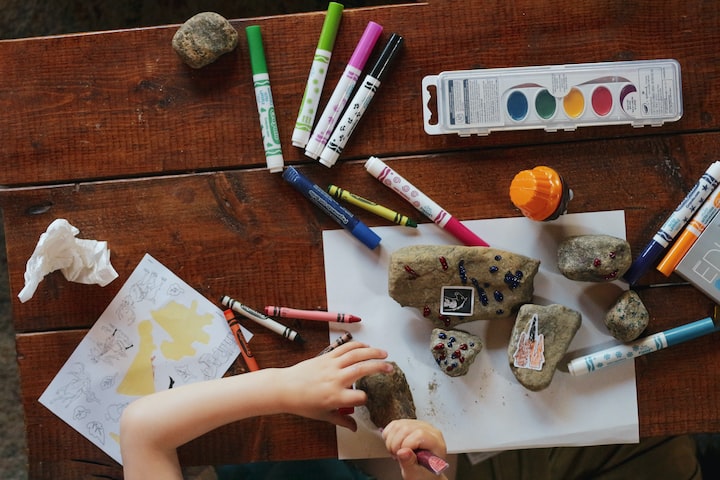 In early March when the kids were about to go on Spring Break, there were rumors going around the district forums that the kids may not be returning to school because of this mysterious virus we had limited information on. It went from the district delaying 2 weeks to a full month, and then we got the call they wouldn't be returning at all. I was in straight panic mode. My kids both 4 and 2 now both have autism. They thrive on structure and routine, and not to mention they were getting services through the special education department.

So overnight I went from being the mom that cooked, cleaned, and cured boo boos and owies, to now full blown occupational and speech therapists. I was floored. These people went to college for YEARS, and had tons of experience with kids like my boys, and many days I already felt like I was barely making it by or drowning. They then added that they wanted to start doing zoom calls 4 days a week twice a day for each child (so for my math gurus that's 16 zoom calls a week for both boys).

In my head I was probably like any other parent when I would say there is absolutely no way you are going to get my child to sit in front of a computer for 2 hours a day! Both boys are extremely active, and I literally spend almost 90% of my day cleaning my house from their destruction they leave behind. However these teachers were determined that they could make this work and they were doing it through the power of YouTube.

Now hear me out, I was still helping do all the work. However through these songs I felt more connected and engaged with my boys than I had before. I wasn't apart of therapy. I knew what they were receiving and things like that, but I physically never was engaged in the programs because I simply dropped them off to a teacher to do what they spent a good chunk of time doing. As there mother I was now in every part of their life. Below I am going to include the songs they used in therapy and how each one has gotten us through this pandemic. We still play them on a daily basis, and I don't think they will ever get out of my head. Most of these will be from Simple songs, Cocomelon seems to use extremely bright colors and can be addicting to the little guys.

Wheels On The Bus

While this song is a classic, there is more to it. We were really trying to work on movements in the songs, and really getting him to focus and make eye contact with me while listening to this specific song. Half the time I'd have the iPad in front of me and we would be doing the movements together hand over hand.

Old MacDonald Had A Farm

Pretty self explanatory, this one is working with farm animals, learning animal sounds. But we also bought a actual Little Tykes Farm House and so we actually will play with this while the song is playing so they have 2 forms of intaking information. While also keeps their hands busy. This video also has a matching aspect to it and I loved the graphics.

While this song is under the threshold of Cocomelon creators, we actually approved of this one in the house. My oldest especially loves dinosaurs ALOT. Like to the point where we had to buy dinosaur PJs from target this year because they had Santa hats on them. That being said this song in particular my oldest brings out his giant tub of dinosaurs and will pull them out for each dinosaur they feature. This one is about a mom and dad who built a time machine for their son to ultimately see the dinosaurs when they were alive. It's descriptive enough that the kids learn physical aspects of each dinosaur, and what they ate etc. We also got kinetic sand for the boys to play with the dinosaurs in while they listen to the song. It makes a really great educational tool.

Walking In The Jungle

This song is great for getting the kids off the couch and physically walking around your kitchen or living room. Here the kids are walking through the jungle and they come across different animals. However they do specific motions like hopping, jumping, skipping, etc. So they are learning physical motions and are learning to act out parts of the video, while learning about jungle animals. We also decided to go to IKEA and Amazon and get jungle animals to help play along in the video. It works really nicely. Activities I recommend is even hanging some streamers from the ceiling and it gives the affect of essentially walking through vines.

This one was a hit in my house this holiday season. It seems like Baby Shark, while as annoying as it is to have on replay, Baby Shark teaches the kids hand motions and fine motor skills. It also establishes the family dynamic of youngest to oldest in the family, and allows the boys to identify different sea creatures. Or in this case tells the story of how Santa gets all his presents to boys and girls or sea creatures in this case on Christmas Eve! It's pretty cute, and seems like they have a theme for each holiday. They even have sharks on Halloween getting Candy.

This song is a classic, but we love it because it goes into teaching the kiddos about weather, and how insects interact outside! My oldest especially loves to tell me now when it's raining. Awesome activities with this can even go as far as using a plastic bin and putting water in it with insects, or even using the kinetic sand and pushing insects around it!

The stars give us a reason to go out at night time and look up at the sky. It helps us also teach about the moon and the planets that are in the sky. Why the sky changes colors at night and so much more. Plus its a good one to help transition the boys from bath to bed so they identify it's night time. Settles them into sleep mode. Although it doesn't always work out, it's still a cute song.

Well that was the playlist of 2020 that helped us in school and just getting through the day. Sometimes I would put these on even in the car just to get the kids to stop screaming and arguing. I definitely think YouTube is mostly for entertainment, there is definitely an educational aspect that allows all of us to be able to be teachers in our own home. Hopefully this inspires you to grow with your kids, and gives you a place to start.

See all posts by Kayla Lindley →