Everything you need to know about Music Theory 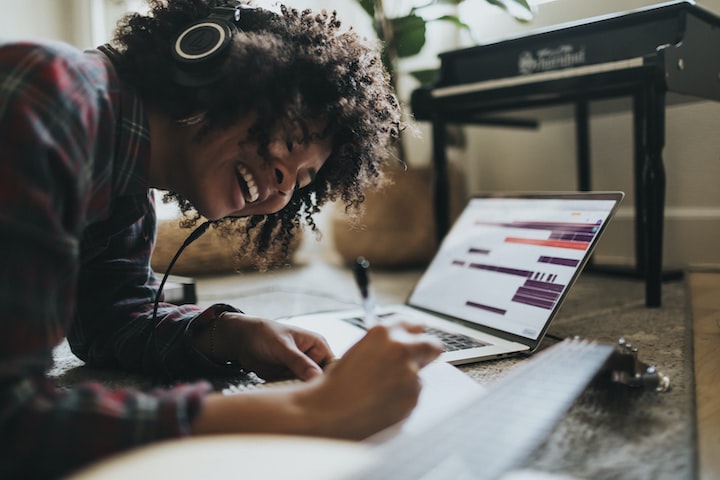 Photo by Soundtrap on Unsplash

I know everything there is to know about music theory.

Malmsteen’s statement is quite a statement to make considering the complexity of music theory: someone who claims to have mastered theory is either a musical genius or possesses a giant ego (or both). And there are probably few people qualified to disprove him. So does that mean there is no hope for us lesser mortals? Of course not. Pop music doesn’t require an exhaustive understanding of music theory for the simple reason that it’s just not that complicated. Many pop musicians and songwriters can’t read a note and have little formal training.

Classical music can be complicated and convoluted: a multitude of instruments to work with; sudden tempo and key changes; and the very length of most symphonies is probably beyond the scope of most pop artists (myself included.)

To begin with, to write a good song, you don’t need major theoretical knowledge nor is it necessary for you to be a virtuoso. Though musicianship is something we all need to improve upon, the essentials of a song are simple and often innovative songs are not so due to their complexity but due to a great melody and interesting arrangement. A simple song is often the best song.

Too much theoretical training can hamper creativity and the grid-lock nature of western classical education is often a snare. I have met classically trained pianists who can play Chopin forwards and backwards but struggle with writing a simple chorus.

Considering that the majority of popular songs are written with only a few simple chords, it’s no big deal for a beginner guitarist or pianist to write a song. Many radio hits were written with three chords. I’m not suggesting that a successful songwriter or musician could get by with just a few chords and a few hours of practice. The thing is if you want to get started and feel a burning in your bosom (that’s not indigestion), then go ahead, what are you waiting for: Create!!

We are made with the power and the desire to create. To be an artist is to be a child again, fascinated with a box of crayons and a sheet of paper. There doesn’t have to be any ulterior motive or deep underlying socio-political reasons for art; just do it for the sheer joy of it.

Firstly, music is comprised of three things: rhythm, melody, and harmony. Beat is not one of these three. Beat is not actually music. (Careful how you break this news to your drummer!) Beat is time represented by sounds. A drummer’s job is essentially to break up the linear progression of the song into temporal sections, that is, to keep time. The drummer makes the foundation for the house to sit on.

Without a good foundation the house will collapse. A good drummer, or drum machine, for that matter, can make all the difference in the world. (A good friend of mine once said that nothing really happens till the drummer shows up. And how totally true that is. All the energy and drive of a band is in his hands!)

Melody is the tune or singable part of the song. Webster’s gives melody as, musical sounds in agreeable succession. Literally this means, notes, one after the other that sound nice. What could be simpler than that?! And you thought this was going to be difficult.

Non-melodic sounds are composed of overly repetitive notes, notes that jump too high or low and just basically don’t follow a nice pattern. To simplify things even further, a good melody goes up and down!

You can have more than one melody in a song. A solo instrument can play one melody (or riff) while the vocalist sings another. Melody is basically how the song goes. The melody is the most important part. It is the plot or story line of the song. The Beatles wrote wonderful melodies and that’s why their music endures. Kurt Cobain had great style and feel but he also wrote great melodies which is part of the reason for Nirvana’s huge success. A good rule of thumb or test of a melody is that good melodies are easy to remember and they stay in your head, sometimes for days.

Harmony is the inter-relationship between the different parts of the song. When things are “in harmony” they fit together nicely and they seem like they belong together. Good harmonies in the vocals often fit together so well that they sound like one voice. This particular quality has much to do with the arrangement of the songs. Webster’s gives this definition of harmony: the simultaneous combination of tones especially when blended into chords pleasing to the ear.

So in its broadest sense, we need to write songs with more in mind than a few words and a couple of chords. As you develop the song, from its infancy of a melody with a nice chord progression to a full blown arrangement, you need to keep in mind where you want the song to go. How do you imagine the bass will sound? Keyboards? Backing vocals? Experiment with the song and the arrangements. Try it in different styles and tempos. Remember this rule:

The Song is NOT Sacred

The song is malleable, changeable, open to interpretation or else how would it be possible for so many versions of a song recorded by different artists to still sound good? Even painters often have several different versions of one painting. Instead of looking at a song as a final package to be marketed, think of it as a work-in-progress, still in motion. The seed of inspiration is planted one day, then watered and nurtured and finally the excess is pruned away to make it strong and healthy.

Rhythm is the pattern of pulses in music resulting from the occurrence of strong and weak melodic and harmonic beats. Now here’s the kicker: Webster’s also gives us this definition of rhythm: the pattern of recurring strong and weak accents and long and short syllables in speech. Can you see why rhythm is so important? Rhythm and the lyrics are so closely related that the two shall be said to be one.

Rhythm is the hardest part to learn as a beginner guitarist and is also the part most closely identifiable as being the heart of the song. If you only know one or two basic rhythms you are in trouble. Every song on your CD with the same rhythm will turn all your material into one long boring dirge. A songwriter is essentially a rhythm guitarist. The rhythm is most closely associated with the style of the song and in order to move with the times keeping up with new rhythms will greatly freshen your sound.

2. The Elements of Poetry

The basics elements of poetry are simple:

Many would argue that a song often contains a plot and characters, so that it possesses the same qualities of a book. In the general sense, this is true, except the plot and characters of a song are secondary to the theme. In a novel both characters and plot are well developed and become very real whereas in a song they are only there to provide a vehicle for the theme. In songs as well as in poetry, the theme is king. If you have incredible imagery and beautiful language but no theme, your audience gets nothing. If you have only rhythm then you should probably be a rapper or beat poet who may give an entertaining performance but your audience still gets zero on the way out the door. If you have thin language and weak imagery but a powerful theme, your audience still walks away with something. He or she may think you a poor writer but they get the message.

This leads to the underlying purpose of poetry or songwriting. Marshal McLuhan wasn’t right: the medium is not the message. The message is the message. You are the medium for conveying your particular ideas and emotions. Your guitar and voice are the method you use to express yourself. The message is the main thing. After all isn’t that what it’s all about? Expressing your feelings and thoughts to someone else?

3. The Elements of a Good Song

Well you need a good melody, good lyrics and a good guitar part. The essence of the song is the interplay between the vocals, the guitar and the lyrics. If you strip a song down to the bare bones, it should still sound good sung acapella. Another good test is to play it in different styles, slow fast and in between...you can’t wreck a good song. Now to expand a bit, here is generally speaking what makes a hit song:

1. Intro that is instantly recognizable

3. Simple, direct lyrics and common theme everyone can relate to

The most common structure of a pop song is something like this:

Maybe a solo in there somewhere and Boom! your three minutes are up. It ain’t rocket science, though if it were so easy to write hits songs we would all do it. And often! A really great way to brighten up a song is to start with the chorus or make the structure of one of the verses slightly different or shorter than the others.

The bigger the audience, the lower the IQ. Therefore, big hits usually deal with easy to digest themes appealing to something everybody understands. (Usually love, relationships, romance.) However, don’t feel discouraged when music that seems silly and childish is successful. Just keep doing your own thing and don’t worry about the rest of the world. Trends, being what they are, control a lot of the market. Drake is hot this year, Lady Gaga last year. The confidence comes from just doing what you’re doing regardless of the trends.

Just because a song is a hit doesn’t necessarily make it a good song. The idea is not to focus on the success, stardom and silver but instead to focus on the magic and the joy of creation and the satisfaction of doing what you love regardless of external reward or public opinion.

The appeal of the pop song is that it registers with a broad cross section of society and the trick in that is in dealing with universal themes. John Lennon’s Imagine has had such lasting appeal because we all long for a safe happy world free of war and greed and corruption. It strikes such a chord with all of us that it has become an anthem to millions. We say that such artists speak to us. They tap into some global or mass consciousness and are able to convey in a few words what we all have been feeling. Now that is art.

Another thing I have noticed in a well-crafted tune is that there are usually only two verses. That is not a lot to work with, so really all you have is two verses, one bridge and a chorus to convey an idea or experience that would take a novelist 400 pages to explain.

If you enjoyed this story you can find more here

Read next: Billie Eilish: The World's A Little Blurry Review