by Richard Revelstoke 10 months ago in bands

A little psychoanalysis of the dudes in the band 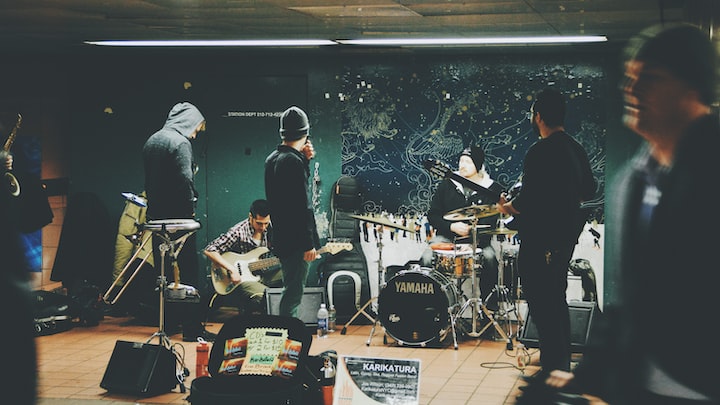 Who are these guys we hang out with? Are musicians just a bunch of hapless misfits who don’t want a real job? How do we, as songwriters fit into this band world? The best way to understand the people we work with and make music with is to look at each member of the band and develop a model of their behaviour. This may, of course seem stereotypical, but the following commentaries are at best, generalizations and are not meant to be conclusive, only indicative. There are many exceptions to these cases. (Now I’m really started to sound like Sigmund, yah?)

There are two sides to the human character: one masculine, logical, reasoning, firm and definite; and the other: emotional, feeling, yielding and feminine in nature. The intuitive perceiving side of the human character is feminine. All of us, are composed of differing quantities of the masculine and the feminine. Obviously women’s strength is in the feminine qualities and men’s strength is in the masculine. This unfortunately leads into a discussion of gender politics that I don’t want to get into right here and is also besides the point. Therefore it will be easier to think of these qualities as canine and feline.

The canines of this world rule the world. They like law and order and submit to authority and love rules and regulations. The felines of this world are often indifferent to all these worldly restraints. They want to, like, mellow out man. Relax. Sleep in, enjoy life and live for the moment. The canines love the 9-to-5 routine whereas the felines come and go as they please, set their own hours and stay out late.

Now how does all this relate to music? Oh, I am so glad you asked. You see, as you probably already guessed, musicians are felines by nature. Musicians are cats! They like to stay up all night, they are fond of long sleeps and short naps and they love to wail! Is this nuts? Well, listen to this: cats are also spiritual animals, being symbolized throughout history with all kinds of spiritual meanings. Cats don’t like rules, they are difficult to train and for the most part they do what they want. They also loooove affection and warm bodies to sleep with. They are independent and sometimes a bit anti-social. Cats tend to be moody, high-strung and aloof. Cats are cool.

And now to continue with our psycho-analysis, please make yourself comfortable here on the couch and we will begin.

The drummer is usually the one who is hardest to understand even though they are usually uncomplicated, straight-forward people. Drummers do want they want when they want and it is at times difficult to get a drummer to cooperate. Due to the physicality of drumming, the drummer is usually the more athletic type. He wants to bang on de drums all day. Drummers know where it is at. They are no nonsense types with a strong spine. Usually, you can’t tell a drummer what to do. Don’t tick off the drummer because without a drummer, you are basically not a band, you are just a bunch of musicians hanging out together.

The bass player is the glue of the band. A good bass player is worth his weight in gold. Due to the chronic shortage of bass players (relative to the overabundance of guitarists) he is the hardest to find. Four-strings with no chords is one of the easiest instruments to learn and also one of the hardest to get good at. Bass playing is often a thankless and unrewarding task. The bass is the bottom and many times when a band is cranking you can’t even hear the bass, cause it’s lost in the mix. But you sure notice when it’s not there. The whole strength and power of the song is lost without the big low end so be good to your bass player. He or she is often ignored and under-rated. Many bass players are frustrated guitarists but because of their humble nature they will often perform a more serving role for the benefit of the band.

He or she is often the den mother of the group. It takes greater dedication and practice to become an accomplished bassist. There is little opportunity to shine and where all the other players in the band have ample opportunity to strut their stuff, the bassist is left holding down the bottom nestled comfortable in the back with the drummer.

Bassists sometimes suffer from a mild inferiority complex. An accomplished virtuoso bassist is a rare gem. Overcoming many years of servitude, his character is probably the most well-rounded of the group because he is not an egomaniac.

Often easy going, happy with his (or her) axe, “doesn’t want to make it cry or sing” to quote Mark Knopfler’s Sultans of Swing. Because rock music is centered around the rhythm guitar, he or she likes being the hub of the wheel without necessarily grabbing all the attention. Difficult to peg as a rhythm guitarist is not too much this and not too much that. Sometimes eccentric or odd, yet rarely obnoxious or conceited. Usually likeable, friendly, but not a pushover. He’s kinda que sera sera play that funky music white boy. Kinda yep, kinda nope and it beats me if you can analyze him or her cause they ain’t telling. Sorry to be so vague, but vague often sums up the Rhythm Guitarist....so on with the show.

And speaking of egomaniacs, say hello to Mr. Ego himself, the lead guitarist. He is so impressed with himself it is just not funny. He can play for hours and hours and hours, in the basement, in the garage, on stage, in your face – it doesn’t matter. He loves to play. And if he is good, and knows he is good, he is the king. Nobody can blow an audience away like a great lead guitarist. Try and get a piano to scream and wail and cry like a guitar. Modern pop rock is built around the guitar and those who can climb up guitar mountain and stand at the top above the thousands of other screaming axe masters, is truly a giant. Eric Clapton was called “God” for the longest time.

Most lead guitarists have excellent ears and often excel in the recording studio. At their worst they are selfish, non-committal, arrogant, argumentative and sometimes childish and rude. Keeping them happy is often difficult. At their best they are endearingly friendly, confident and optimistic, full of gusto and enthusiastic about life and the band. They want to explore different styles and go off on tangents, fond of elaborate progressions and bridges. Mostly they just want to wail and will take over the whole band if given the chance.

A lead guitarist is usually a show man, an extrovert and quite confident. He is the mathematician of the band, able to memorize scales, riffs and leads with ease. Due to his mathematical nature, he (or she) is usually analytical, logical and a black and white thinker. Sometimes a perfectionist to a fault, if you can find one who is humble you are truly blessed. If he can swallow his big pride and play from the heart instead of the head, he is a genius worth treasuring.

“Handcuff The Guitarist. The last person who really, really wanted to listen to a twenty-minute guitar solo finally flatlined in late 1978. Much like the dodo – and said to be nearly as intelligent – the Interminable Solo Aficionado is now extinct. And considering that the dead generally do not buy record albums, it is best to ensure that your guitar solos last no longer than, say, something someone would be willing to listen to on an answering machine.” www.theferrett.com

Because women are more accepted as singers than as any other instrumentalist, they are just as plentiful as men in the music industry. And I would have to say, that in general women make better singers than men. Because of the emotional nature of women (please don’t shoot me, I’m not a sexist) they respond to music more deeply and react to life in a more profound emotional way. Singing has been defined as “the softly crying vowel”. To me this sounds like a job for a woman (or a man who is deeply touched by life in every aspect.)

Often capable of the heights of joy and the lowest lows, the singer is the bon vivánt of the group. Also the one craving the limelight the most, he or she is often alternately obsessive and desperate in their pursuit of musical glory. Definitely the showman of the band, the singer is the one with the “personality”. Charming, cultured, often well-read and educated, the singer is the romantic type to a T.

At his or her worst: bounding from bed to bed, one broken heart after another, the singer is sometimes the most insecure member of the band. If successful, capable of outrageous acts of diva-ness and spoiled-brat tantrums. Almost always the leader, he or she is a natural performer and a chronic socialite. Able to relate to all members of the band and keep everybody together and happy is a job that takes more than just singing talent. The singer wants to be the star; sometimes just dying for attention, embarrassingly full of themselves, he or she is also the most likeable and often loved by all. The singer is the band and everything and everyone in the band needs to feed into the vocals.

Here is the true musical genius of the band. Capable of digesting reams of sheet music and tone theory, he or she is usually well-trained and way over the heads of the rest of the band in terms of theory. Often the egghead or brain of the band, they are also often addicted to electronics and gadgets. Completely confident musically, they can pick up songs quickly and wrap circles around melody. Sometimes a snob and sometimes a nerd, the keyboardist can also be the most intelligent and best conversationalist of the band.

Because they are usually well-trained they have nothing to prove and therefore not as self-centered as the rest of the band. You might have to step up a level to keep a keyboardist interested in your band. They are looking for a challenge so don’t disappoint them. And don’t take them for granted either. He might seem to be having fun because they will generally go along with whatever the band wants, but if they get bored....say goodbye.

Try not to introduce them into the band until you are ready to gig, so at least they will be gratified by some success and audience appreciation. They are probably not going to have the patience to work through the jam stage. Usually agreeable and easy to get along with, the keyboardist is often introverted and unassuming. Parents push girls to play piano more than boys at an early age. Girls seem to flock towards it whereas boys seem to flock to guitar. (Why, I must confess I don’t know, I’m just making an observation. Perhaps it is for the same reason that young girls often get crazy about horses and teenage boys love motorcycles. You figure it out.)

Therefore, I think there is a surplus of untapped female keyboard talent out there waiting to be discovered. Things changed considerably in pop music in the late nineties and there are now tons of female guitarists and bassists out there.

Read next: Top 11 Songs From ‘The Many Saints of Newark’