by Tom Sturtridge 4 months ago in album reviews

New Wave of British Heavy Metal legends Angel Witch have returned with their fifth studio album Angel of Light, their first album since 2012s As Above, So Below.

Angel Witch have had an interested discography release schedule, releasing three album in the 80s: Angel Witch in 1980, Screamin' 'n' Bleedin in 1985, and Frontal Assault in 1986. There was then 26 year gap until As Above, So Below in 2012 and a further seven year wait for Angel of Light. Despite this, Angel Witch have maintained a strong cult following and sound as good as ever, almost as if they never stopped and despite numerous member changes over the years. Over 25 people have been members since their inception in 1976. Current members are; Kevin Heybourne (Vocals, Guitar), Will Palmer (Bass), Jimmy Martin (Guitars), and Fredrik Jansson (Drums). 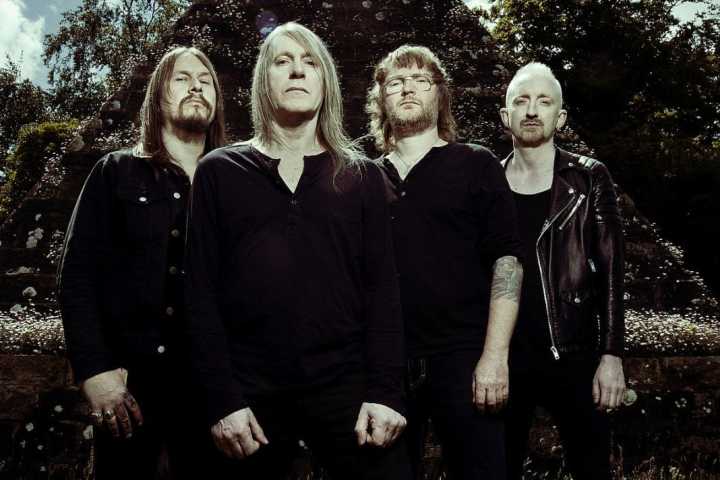 If you love galloped rhythms (like Iron Maiden) then "Death From Andromeda" is the track for you. It kicks off with Maiden-esque galloped bass, guitars and the drums utilising the ride and the ride bell to give a feeling of speed. The verses continue this theme of gallops and strong notes pulled together by consistent bass and drums. The chorus isn't much different, again continuing the galloped theme whilst the vocals follows the chord pattern. Again, another classic solo style is played, with this solo being slightly shorter than the others on the album, but this serves the track well. From 4:30 onwards harmonising guitars are used to provide an instrumental break, another classic trope of NWOBHM. The song ends just as hard hitting as it began.

'We Are Damned' starts of chaotic. With strong drums fills and bass played alongside a slightly disjointed harmonised guitar rhythm, which towards the verse becomes more melodic and harmonised. Verses follow a 'devil scale' of long droned notes with following a similar beat to the drums. In the chorus every line is followed by a strong "We Are Damned" and phrases including 'Abomination', a guitar lead completes the chorus sound providing a well rounded and full sound. At the 4 minute mark the rhythm slows down allowing for the bass and guitars to copy an ascending riff followed by disjointed lead guitars like heard in the intro. The song ends with a fade removing the need for a harsh stop and allows us to enjoy the slow ascending riffs and drum fills.

"The Night Is Calling" is the longest song on the record at over seven minutes long. However, this track is not a slog or bore to listen to. It is also our first introduction to clean/acoustic guitars and warm vocals, similar to that of the intro of a Blind Guardian song. After this clean intro you are hit by distorted guitars and powerful chords before reverting back to the clean guitars, with a bass which explores higher melodic ideas and drums which are soft to fit the clean guitars. The chorus switches back to distortion and louder, harsher vocals, but still smooth and clean enough to clearly understand. After a brief clean section, the overall tone of the song darkens and palm muting is utilised to portray this alongside the drums using the toms and snare without cymbals to produce a heavier tone. At the five minute mark, the song enters a double time feel, with a heavy palm muted riff and fast drums. This is where we find the short and simple guitar solo before entering another chord and riff heavy section which all fans of metal will enjoy greatly. The song then slows back down into a final chorus a great contrast to the previous fast and hectic section. The song finishes with the same clean/acoustic riff which slows to a single strummed note.

Another heavy song next with 'Condemned'. Starting off slow and heavy with another fantastic riff, the verse soon introduces itself with a faster palm muted interweaved with dissonance through extended chords and small lead sections. The chorus enters into a more major scale sound, with open hi-hats from the drums creating a loud and brash sound whilst the guitars and vocals do a good job of keeping it all in check. What follows is then probably the stand out guitar solo on the album, with lots of fast hammer ons and pull offs and contrasting slower bends. 'Too close, too far, too weak to reach you' is the standout vocal from the chorus, creating an atmosphere of hopelessness but also determination.

Another galloping track with "Window Of Despair." This gallop however, is faster and tighter than the one previously heard. Again, the gallop is interwoven with equally as powerful riffs. Pre-chorus shows off darker themes leading into a galloped chorus. The solo for this track comes in fairly early compared to the others at just after the two minute mark. This solo is slower and is closed with several passages of harmonised guitars before heading back into the verse riff. A fast palm muted riff ends the song in spectacular fashion.

"I Am Infamy" starts with a slow fade in of a slow, unnerving, heavy riff with long droned notes and the slight dissonation in the guitars. The verse brings the return of palm mutes and a much slower gallop which accompanies the slightly lower vocals, which maintain their power and definition. The chorus differs slightly to other on the record. This chorus being characterised by more shout heavy and forced, lower vocals which matches the lower vocals of the verse and matches the more melodic and thrashier rhythms. A descending spider riff takes us back to the vocal. The solo starts of relatively slow, speeding up as it progresses showing off Jimmy and Kevin's composition and melodic capabilities. The solo continues through into the final chorus. As we enter the final thirty second of the track, the drums become loud with lots of crash cymbals and another heavy riff.

The final track on the album is "Angel of Light," which is also the title track. More clean guitars open the track before distorted guitars enter. This time however, the clean guitar continues in the background creating a very full sound. Heading into the chorus, another gallop rhythm is found, this one being played on higher notes, before the verse mixing, calmer clean rhythms during the first half of a line of vocals and then becoming heavy and faster during the second half. The guitar patterns, in a rhythm sense, are probably the best on the album, mixing major and minor sections with palm mutes, slides, droned notes and gallops. The solo is more hectic on this track, still being melodic it provides a great contrast to the strong riff and chord heavy guitars. As usual, the solo leads back into a final chorus where the clean guitars can be heard again before the clean guitar leads to a fade out.

Overall, Angel of Light is a devilishly good album and a worthy addition to Angel Witch's discography. It combines classic NWOBHM with dark themes usually found in heavier forms of metal and produces an absolute timeless classic. Angel Witch have proven you don't need to scream or growl your voice into oblivion or have 8-string guitars or needless breakdowns to create a heavy, riff centred record that is extremely pleasing to listen to. This album produces so many riffs and musical ideas it's extremely difficult to find flaws or dislike any of the tracks. Coming in at just over 47 minutes in length spread over the aforementioned eight tracks. The only negative I can pull from this record is, sometimes the mix can be very full and the instrumentation can overpower the vocals. However, this is only found on the opening track.

Angel of Light is a must have for any Angel Witch or Metal fan and is a breath of fresh air in a crowded genre. I cannot recommend this album highly enough.