A Halloween Playlist for Adults Who Don't Play

This ain't your momma's Halloween party 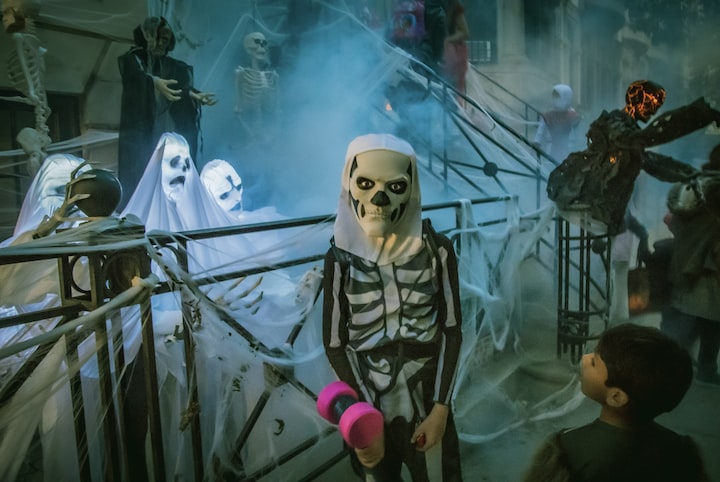 Photo by Clay LeConey on Unsplash

Here's the thing. I don't play around when it comes to Halloween.

I could write a long, nicely worded essay detailing my spooky origin story, but that's not really why we're here. Just know that in my real life, I am the go-to Queen of Halloween.

In my own mind, at least.

But I do have an impressive resume of random spookiness, thank you very much. Halloween has been my jam since the mid-80s, and I've been created a plethora of charity haunted houses, haunted Halloween parties, and creepy campfire tales over the years. Some were pretty epic.

But then I got old, and when you get old, Halloween has a whole new definition. Gone are the days of drunken debauchery amongst ornate decor. Gone are the cider-scented October evenings spent screaming at chainsaw-wielding teenagers from the safety of an overcrowded hay wagon. Instead, Halloween means tearful fights with 6-year-olds over $35 princess dresses in the middle of Target, secretly picking mini Reeses Peanut Butter Cups out of a child's trick-or-treat bag, and explaining for the 55th time how Chucky isn't real and waiting for you in your closet despite what Brody told you on the playground now OMG go to bed!

But don't weep for me, my dear Spookies. I still know the secret formula for the most spooktacular Halloween party playlist, so let's dig in.

(See? Proof that I'm old. I used the word "spooktacular" AND made a grave-digging reference.)

Haunted House by Sir BabyGirl fits the bill nicely. I don't remember how or when I stumbled upon this gem, and I don't know a whole lot about Sir BabyGirl themselves, but they know how to create quite the earworm. Start your party with Haunted House, and you're sure to get people in a disturbingly good mood.

Now we have to dial up the creep factor a bit to remind people that everything is terrifying and there's probably a serial killer in the basement. Midnight Syndicate is fantastic for this. They have albums upon albums of creepy ambient music, and no two songs sound quite the same. Raven's Hollow is one of my personal favorites but honestly, you could pick any track from anything in their catalog, and it would immediately turn your overcrowded kitchen into a haunted cafeteria in a mental hospital during a full moon.

But we can't get too spooky. The night has only just begun, after all. Let's bring it up a bit with a little 80s nostalgia from Halloween past with Nightmare on My Street by DJ Jazzy Jeff and the Fresh Prince.

Nightmare on My Street is one of those childhood songs that you've completely forgotten about until you hear it again, and soon you'll have the whole place singing along.

But, you know...a fun nightmare.

It's time for another banger, but we're going to need a slightly disturbing one. For this, we look to Outkast. Andre 3000 and company never fail to deliver super upbeat, dance-worthy songs with rather disturbing lyrics. Dracula's Wedding is a hidden gem on arguably one of the best albums to come out of the Aughts, and it's another one of those songs that will make your guests perk up from their post-Carmel Apple Martini sugar crashes and say "OMG, is this from the Speakerboxx album?"

Admit it. You saw the name Tim Curry and were expecting The Time Warp here, right?

We have no time for that here (I know what I said!).

Instead, here's this spooky lil' ditty from the 1986 not-quite-cult-favorite The Worst Witch. This song is performed by the legendary Tim Curry, but it's scary on many more layers. The lyrics are bizarre, the beat is slightly off, and it's performed by a character with the unfortunate name of The Grand Wizard.

This one's definitely a conversation starter.

"You're Dead" by Norma Tanega

Here's a toe-tapping tune from the 60s that'll get those morose messes up off your couch and mingling again. You may recognize this one as the theme song from FXX's What We Do in the Shadows, and honestly, this song may make your guests decide to turn off the music and watch a Shadows marathon. In that case, watch the movie first, then dive into the series. You can't go wrong with any of it.

"Pet Sematary" by The Ramones

And now let's blow their stringy Dollar Store wigs right off their heads with this rocker. According to Horror lore, massive Ramones fanboy Stephen King himself approached them to write the closing credits song for the film adaptation of his novel, and this is what they came up with. While this song doesn't quuuiiiiite match the tone of the rest of Pet Sematary, but it's still a hauntingly good time.

Hell, anything by The Ramones is, isn't it?

So the party's winding down, but we want to keep a little Halloween magic alive, right? Now's about the time your weird friend Jen (or Jess, because let's be honest; I'm this friend at most parties, Halloween or otherwise) insists on busting out the makeshift Ouija board and contacting the spirit of your high school math teacher who once failed half the class for no reason. That's cool; I have you covered. Witch is a haunting, lilting tune that plays well in the background as your guests fight over who's actually moving the pointer-thingy.

We've got to end on a high note, and this one is a fan-favorite. True, it's no Monster Mash, but you can still dance to Werewolf Bar Mitzvah from Season 2 Episode 2 of 30 Rock. This one started as an 8-second cutaway joke during the episode, but fans loved it so much that Jeff Richmond (aka NBC's resident musical producer and arranger aka Mr. Tina Fey) expanded the melody and comedy writer Tami Sagher wrote more lyrics. But because no one could find Tracy Morgan that day, they called in then-30 Rock-writer Donald Glover (the future Childish Gambino) to sing the song, because he did the best Tracy Morgan impression.

The rest is history. Literally. You can read the entire oral history here.

Werewolf Bar Mitzvah is the perfect song to end the perfect Halloween bash, and it will give your guests that happy, spooky feeling so that they can return to their safe, warm beds and dream of student loan debt, mortgage payments, the 2024 election...you know; really scary stuff!

Here's my entire playlist. You can thank me later. Happy haunting, my Halloweenies!

More stories from Jessica Conaway and writers in Beat and other communities.