The Dark History of Nauru Island

The tiny island nation of Nauru, thanks to its phosphate reserves rose meteorically to become the richest country in the world in the 1970s.And then the phosphate reserves started depleting and with it started its equally spectacular downfall. 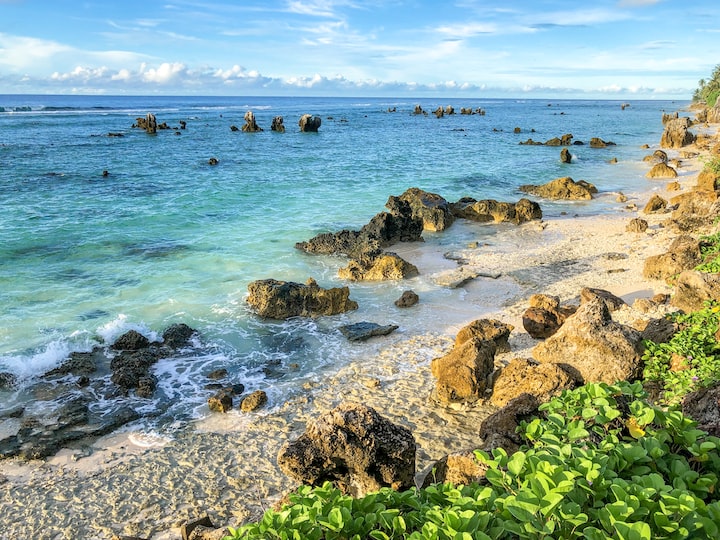 Photo by Winston Chen on Unsplash

A Sordid Tale of Human Exploitation and Greed

In 1798, John Fearn became the first European to report sighting the Pacific Island of Nauru.

In detailing his travels, John described the Nauru men as ‘vigorous and well-formed’ and the women as ‘petite and beautiful’. He also mentions about the active lifestyle led by the inhabitants and the Nauruan diet consisting mainly of fish, fruits, coconuts, and root vegetables. The land was also abounding with wild almond trees, pandanus trees, and several other types of fruits consumed by the natives.

A little more than 200 years later, the situation changed drastically, for the worse.

Phosphate was discovered in Nauru and it made it the second richest nation in the world by GDP per capita in the early 1980s. But the newfound prosperity also brought disaster along with it. Years of phosphate mining – largely by foreign companies destroyed the land making it incapable of any agricultural activity.

And this changed the Nauruan diet from healthy food to fried chicken and cola imported from the west. And a once vigorous people addicted to rapid consumerism replaced their traditional sports and fishing activities with drinking and watching television that became the nation’s most common pastimes.

The result: Nauru has the highest rates of type 2 diabetes in the world, with 40 percent of its inhabitants affected by the condition. 71 percent of the population is obese. 97 percent of the men are overweight, with women only marginally behind.

Adding to the health problems, the economy collapsed in the 1990s due to the rapid depletion of phosphate reserves. The prosperity declined, the jobs disappeared and the once arable land became a wasteland due to years of rampant mining. The Nauruans lost everything except the obesity that clung on to their lives like an evil monster gradually sucking their lives.

Nauru Was a Nondescript Island

Until 1900, Nauru was of minor strategic value for the colonial powers jockeying for control over the Pacific. In 1901, the geologist Albert Ellis discovered that nearly 80 percent of the island is covered with rich phosphate deposits, a mineral widely-used at the time for fertilisation. Overnight Nauru became the most important country in the Pacific region.

By 1906, Germany was already reaping the benefits of the island by striking a deal with the Pacific Phosphate Company that was created for mining of phosphate. Then the war came and the control over the island passed to the British empire along with Australia and New Zealand who started large mining activities on the island. During the Second World War., control of Nauru was wrested by Japan which lasted until 1945, when Nauru was surrendered to Australia.

Nauru became independent on 31 January 1968, making it the world’s smallest republic. The control over the Pacific Phosphate Company passed on to the locally owned Nauru Phosphate Corporation in 1970. The money made from selling off phosphate made it the second richest country in the world per capita with the highest standards of living in the Third World.

And with the newfound prosperity, the entire health DNA of the average Nauruan changed with sedentary lifestyles, binge eating of western junk foods, and a ‘culture of obesity’ that became a sign of wealth. Soon drinking and watching television became the only activities done by the populace. Nauru’s phosphate industry was booming, and its residents had more money than they knew what to do with.

And adding to that, years of rampant phosphate mining had made the land so unfertile that importing cheap processed foods from trade allies like Australia and New Zealand was the only food available for Naurans.Let alone growing food, the land was even unfit for humans to live.

As Rosamond Dobson Rhone, a writer for National Geographic Magazine describes the aftereffects of phosphate mining.

But the phosphate reserves were finite, and by 2006, they were exhausted. Nauru was left as an environmental wasteland, with no consistent source of income. Left with no other options, the nation started transforming itself as a tax haven for illicit money laundering activities. This further crippled the island’s economy as investors started pulling out. The country was in deep financial doldrums.

Nauru appealed to the International Court of Justice to compensate for the damage from almost a century of phosphate strip-mining by foreign companies. It won the case and Australia offered to pay $2.6 million annually for 20 years along with New Zealand and the UK who made one-off payments of $12 million each.

But the money wasn’t enough. The economy could never recover and the sedentary lifestyle brought about by the mining left behind an obesity crisis, the scale of which was unheard of, even in the developed western countries. Nauru’s ailing health became the perfect example of how obesity can become an epidemic if left unchecked.

Life Is Improving Slowly for Nauruans

In 2005, the Pacific Obesity Prevention in Communities Project provided a number of recommendations to control the obesity crisis in the Pacific countries. These included regular breakfasts and meals throughout the day, along with an increased physical activity. These were also adopted by the Nauruan government as part of its health initiatives.

The government also started several initiatives to encourage healthier lifestyles through a variety of methods. The most innovative being, every Friday 5 km talk around Nauru International Airport mandatorily to be done by every citizen. More than the walk, the initiative acquired symbolic importance with every Nauruan attempting to change for the healthier better way of living.

Yes, the lack of adequate funding due to a dwindling economy prevents the implementation of any lasting obesity legislation. But having said that, more than the measures, the mindset is changing and the follies of the past are being rapidly abandoned by common Nauruan. And it will not be long before we again see them back in their original selves 200 years ago, as the ‘vigorous and well-formed’ men and women.

Yes, it is one of the world’s least travelled countries with a population of 12000 people and less than 500 tourists visiting the island nation every year. So, a visit to Nauru is strictly for the offbeat traveller who loves the surge of adrenalin by conquering unknown frontiers.

• How to Reach: The only way to reach Nauru is by Nauru Airlines which operates twice a week from Brisbane, Australia. Make sure that you check the website for any last minute reschedules or cancellations (yes, it happens quite a lot due to bad weather).

• Best time to visit: Nauru has a moderate climate with temperatures ranging from 24 degrees Celsius and 34 degrees. Temperatures may drop down very suddenly due to sea changes.so it is a good idea to pack in some warm clothing. The currency of Nauru is Australian dollar (AUD) which is widely accepted everywhere. The whole island is just 8 miles and can be covered within a few hours.

o War time history: Nauru has a lot of relics from WWII days when it was under Japanese occupation, from guns to prisons you have everything here to be explored.

o Fishing: Nauru is a paradise for fish lovers with its blue oceans offering wide variety of fishes from tuna, marlin to barracuda.

o Exploring Yaren: Yaren is the capital of Nauru and home to some of the best government buildings and hotels.

o Climb to Command Ridge: The Command Ridge is the highest point in Nauru where you can get a breath-taking bird’s eye view of the entire island. You can also explore some old Japanese barracks of the war time era constructed at the top of the ridge.

o Relax in Anibare Bay: Being an island Nauru has picturesque beaches and the best one is Anibare bay. The beach is clean, almost empty in the weekdays and offers fabulous views all around.

I am an executive who likes spending time reading and writing about almost everything under the sun.I love writing within the cusp of relationships, history, and creativity where boundaries are blurred, and possibilities are immense.

More stories from Peeping_Soul and writers in Wander and other communities.