Nothing but blue and memories of you. 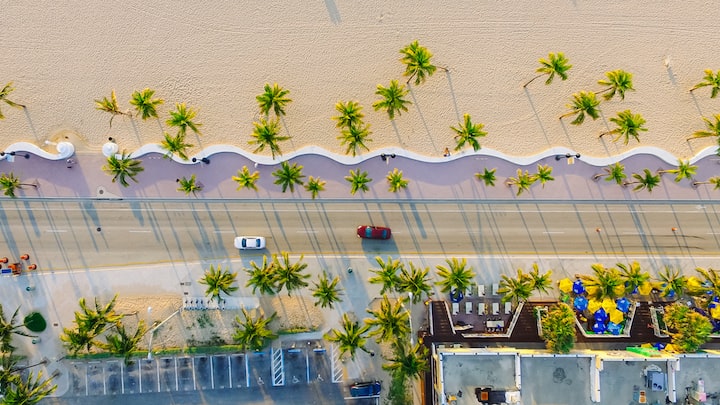 Photo by Lance Asper on Unsplash

There are 8 Ocean Avenues in the United States. I've only seen three of them. It's kind of a special street name, especially if you're a millennial and recovering emo middle school kid (thanks Yellowcard for the banger). Ocean Avenue usually means, well, there's an ocean nearby, one of 'em, one of those oceans. I heard recently there's a new one. If my Ocean Avenues could talk they'd need a Netflix special - at least 90 minutes long. The stories! The views! The same avenue name but in three different corners of the country! Taking a walk down memory avenue...

There are many days I wish to turn back to when I pass, come up on, and am reminded of Ocean Avenue in Brooklyn.

Off near Prospect Park, from there to The Rockaways we marched and greeted every street with hope for change.

An awful date that turned into someone's stand-up material somewhere because anyone who witnessed that will have jokes for years.

A bike ride from hell turned into a block party turned protest turned party on the beach kind of day.

Lazy Sunday at the park with a snow cone that I ended up dropping on the ground and a stranger bought me another one. We talked about how people need to be nicer to each other and we both acknowledged the killer sunset and how summer should never end.

You're right there on the beach, passing the football off to me with a beer in one hand. We're hitting it off for the first time in a while because we have "playful flirtatious banter" that "no one understands." But we really just love each other. We're not doing that annoying arguing back and forth just to entertain ourselves and pick on each other thing anymore.

We drove down from Tuscaloosa, to watch our team play, but then we stayed through Spring Break, and never went back until finals week.

You and I were oil and water, but on Ocean Avenue, you finally told me the truth. You were in love with someone else and they didn't love you back. You had no idea to handle it and thought I was the perfect person to confide in, find guidance and support from. But you had no idea that I was in love with you.

I brought nothing home from that trip other than a sunburn and overdraft fees. We stayed friends until the end of that summer after graduation when you moved away before I did and I said some things I regret and I regret not saying other things.

I really can't think about Daytona without thinking about that football flying past my face and the love that drifted away off to sea.

Venice to Santa Monica, I walked the boardwalk down. Sat on the Ferris wheel, rode the rides, ate a burger on the beach.

Gave someone money for a beer, had one, stumbled home from too many said beers.

Bought a Dodgers baseball cap, caught a live performance, dodged a skateboard or two, ate a hot dog on a bench.

Dreamed of seeing this street more often, pondering the rent I could afford and how I could live on Ocean Avenue.

I waited for the sun to set from the curb while I waited for a ride, which I later turned down. I'd rather walk along the water, get sand in my shoes for eternity just to walk down your periwinkle, with a hint of cotton candy sky, palm-lined stretch.

I think everyone has THAT street, that boulevard, hell even that cul-de-sac, that brings them back to a place in time, and offers a joyful look back - whether good or bad or both, a memory.

A few gentle words for your Ocean Avenue.

Where the water hugs the road

and the sand meets the sea

I often wander up and down

to see if this is where we meet.

A friendly face with the warmest embrace

I catch my breath when I see that place.

Chug water, not tequila, instead

and wait for the green light to turn red.

I'd rather take the long way around

on Ocean Avenue where the views abound

and all I hear are is this wave-crashing sound.

There's no rhyme or reason, just soaking up every season.

More stories from Heather Whiteside and writers in Wander and other communities.