A Weekend Once Upon A Dream

by Nat Bar 19 days ago in lgbt travel 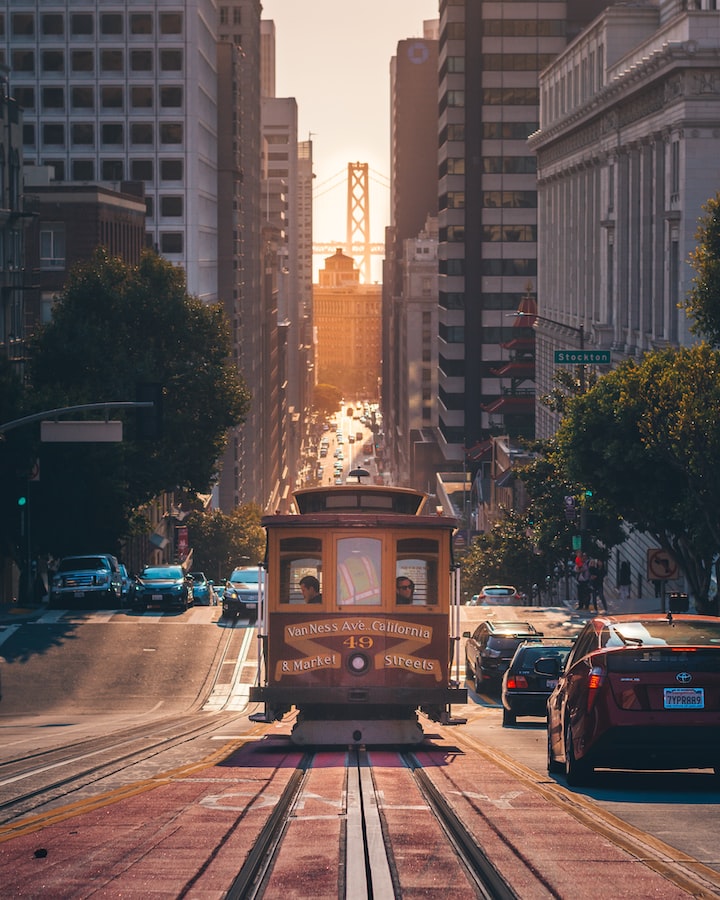 Photo by Amogh Manjunath on Unsplash

This story is based on a vacation long-past, before the virus made travel frightening. It is a map of the unappreciated parts of gritty San Francisco, for those who are willing to look.

To plot these points and traverse the city the way we did over one weekend of queer intellectualism and debauchery would be to traipse drunkenly through dark hallways into basement parties with too many mattresses and not enough chairs. My friends walk before me into the gloom, their white-shirted silhouettes disappearing down the hall as my flashlight glow pursues them. Drinks are proffered in red cups — but I am too paranoid to take anything given to me, and I cling to the wall holding the beer I brought in one hand. There is a jubilance in my friends and I wonder what was in the cups that I refused. Will I miss out on water from the Fountain of Youth simply because I am afraid of being drugged or poisoned? I watch with clear eyes as everyone else becomes dim and slow-moving. The air in this basement was cold and moist like river rocks when we descended the spiral staircase, but now it reverberates with the sweet heat of dancing college kids and independent scholars, throwing ping-pong balls on a plywood table. Oh how we can thrive in the dirty and dank spaces between tiny apartments, smoking cigarettes and leaning against trash cans damp with Bay Area fog. We both wear jean jackets and climb the hills of one street, picking up stones and pebbles from gutters to drop down the next hill as the slope moved gradually downward toward the grey-cast sea. I wonder if Poseidon has ever graced this bay and somehow I think that the answer is no, between the irreverence of the culture and the smell of urine and petrichor that haunts every corner of the places we can afford to walk.

A night sleeping on the couch of our friends who are better off is mitigated by the poetry that we read to each other in whispers from our lit up phone screens just before we fall asleep. The grinding of his teeth sounds like the trolley passing by, so when I wake at 4am to the screeching, I think nothing of it and doze back into a haunted sleep.

We are swept into a day of the natural hills and the lichen green harbour waves juxtaposed against harsh sky-scrapers and we lay back in a patch of grass and flowers to listen to a political rally where Uncle Bernie is about to speak. The sun is dull here, like the shine doesn’t quite permeate the ozone layer directly above us, but I have forgotten sunscreen, and I keep my hood drawn about my face and my sunglasses on. Everyone in my group is taller than me, with spidery legs and walking shoes, and I saunter alongside the group in my combat boots, a mustachio of sweat dotting my upper lip as I keep up.

Chips. Chips all day and night. We eat them like an anxious habit, licking salt from dirty fingertips and sharing yet another cigarette. The terrace overlooking the sea two days ago was so nice that we try to go again, but this time instead of being greeted with coffee and honey in little blue cups, we are met with a friend’s political agenda, as he tries to explain to us that he is God and his Hands Are Not Real, but we know this is just his acid-washed brain talking. We will sleep here tonight, but between us, I will sleep in my jeans and keep my steel-toe boots on. His girlfriend Molly — and I swear she is a person and not a drug — gives me a poke tattoo on my calf, an x and an o for I know not what, but it isn’t kisses. It is my one souvenir from this strange vacation, and I am glad to be temporarily rid of this four-story house with seventeen residents and sheets instead of doors.

Later in the red light of the music venue, I find his searching hand in the crowd, but this is a platonic love, and we both cry tears as Laura Jane Grace hops on stage to tune her own guitar. The sweat and bodies would usually make me anxious but with the fortitude of his hand against mine, I can dance, and I do — the way I refuse to with anyone else because reckless abandon does not look good on my small and feminine face.

After the pulsing of the music is gone our ears ring with hollow euphoria that doesn’t dampen even when the aforementioned friend tells us that he has taken a midnight bus out of town, and now we have nowhere to sleep. The panic of vagrancy is delayed by my happiness. As we lay on the hood of my car sharing the last cigarette from the pack, watching planes take off overhead from SFO, I think of every place that might be better than here, and all one-way tickets that I would buy if my bank account had more than a solitary twenty-three cents. And despite it all, I realize: I am in the moment of the only destination that I want to be.

writer, gardener, amateur natural historian. procurer of counterfeit dad jokes. join me as i tell stories about all of the strange things that happen to me on the day-to-day.

See all posts by Nat Bar →