“No means no”— unless you’re speaking to a film producer, your boss, your classmate, the President…

by Lauren Entwistle 7 days ago in feminism

Recent headlines have once again brought to light the hell that women go through when dealing with men in positions of power. It is time that the system that benefits abusers is finally addressed. 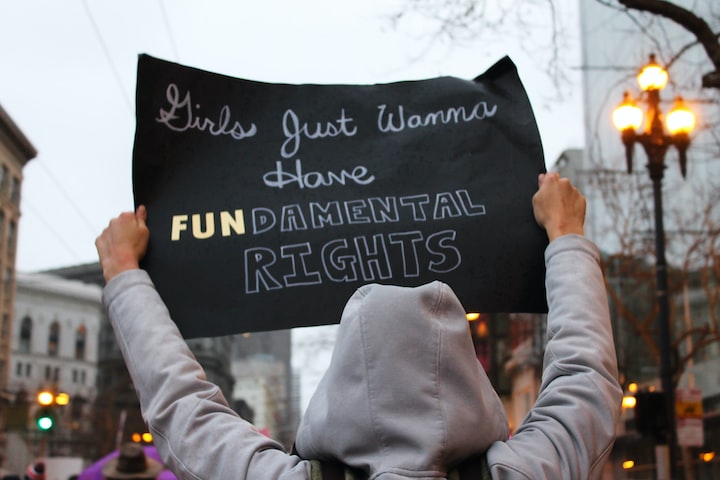 Photo by lucia on Unsplash

Today, I visited a church. They are pretty peaceful places, and I enjoy walking around the graves, picking out the deceased’s names and trying to remember them all. This particular church is situated on a busy stretch of road near where I live, opposite two pubs and a bus-stop often used by students — so it’s not unusual for this place to attract nosy people like me who want to look around.

“Excuse me, I know this sounds odd — but could I take a photograph of you?”

A man, possibly in his late fifties and holding a DSLR was in the doorway through which I was about to exit. He’d been milling around the entrance for a few minutes while I’d been reading some of the flyers in the porch, taking photographs of the Saints above the gates. Sweating, I turned around and laughed, “I guess?”

You have to be polite. Polite and nice.

“So, you’re a student? What are you studying?”

“Lauren! Lovely name. I have a niece called Lauren. If you don’t mind me saying so, you have beautiful eyes. I’d really like a photograph of them.”

I could have said no thank-you. It would have been easy, just blame it on being camera-shy. But the compliment blind-sided me (he called me beautiful, after all) and the swell of “it would be rude not to” blared in my ears over the cold rush of sweat. There is less pain being compliant then risking the unknown reaction of a rejection.

I was ushered to the side of the porch and sat on a seat whilst he talked about lighting and shade. The lens was so close to my face, I was sure he could pick out the creasing eye-shadow and flakes of mascara settling on my cheeks.

“Lovely. Could you look the other way please? Oh! That’s beautiful. You have gorgeous, big brown eyes. And a beautiful face, I might add.”

I sweated some more, trying to lightly take the focus off myself and back on him, testing Paxman-interview tactics. Have you been a photographer long? Are you an amateur? Do you only use DSLR?

There were a few more snaps and clicks before he stopped and said thanks. At this point he’d helped me to my feet, holding my hand. Still holding it tightly, he said:

“Can I take you out for a drink sometime?”

My mother always taught me to be polite. I was brought up with please’s and thank-you’s and it has firmly stuck. When requesting something in writing, it is always “perhaps you could” instead of “I need this by.” Anyway, on a bigger note, conflict is not in my nature. Sometimes I wish it was.

But my Mum also instilled wariness in me. Of course, I think most mothers do teach that particular lesson to their children — but in those warnings it was rarely ever a woman I was taught to distrust. Sometimes, yes. A stranger is a stranger after all, and predators and abusers come in all genders; but that lesson was never put to the test in my experience by an unknown female.

I recall once being strapped into my car-seat at a Tesco petrol station whilst my Mum went in to buy something. I was aged maybe three or a bit older. Before getting into his car, a man took a few steps closer to my window so I could clearly see him and waved at me. As if on cue, my mother then emerged from the kiosk. He stopped and commented on her “beautiful little girl.” She replied thank-you through a gritted-teeth smile and got herself into our car before locking the door.

“Did you know that man?”

She then turned to face me in the back.

“Now he was very nice — and he was probably just being nice, but we are always wary of strangers aren’t we? Even the nice ones.”

Even the nice ones. And this man was very nice. He’d called me beautiful. We’d stopped and talked about the gravestones. He technically hadn’t overstepped anything by asking me out for a drink. But I panicked. My gut twisted and my brain began running at a mile a minute, contradicting itself and seeing red for danger. I suddenly felt a little unsafe.

A stranger had photographed me and now was asking to take me out for a drink. Of course, a drink is a drink, but a stranger is a stranger and an unknown person is possibly a threat. He wasn’t taller than me, though. He’d commented on my height and asked me to crouch slightly for a shot. But, instinctively or otherwise: I will always fear a male over a female.

I smiled and said thank-you, trying to slip out of the situation nicely, but started stumbling.

I did. And God Bless, he’d technically thrown me a bone to escape with. But I still straightened my spine, steeling myself for a reaction.

He sighed. I stiffened.

“Of course, of course. And I suppose, y’know… I am old enough to be your father.”

There was an awkward pause. More people passed the church’s gates as they travelled from the bus, to the pub or to their homes for evening meals before the dark set in. I also sensed the day closing and mentioned I had to get home, after politely thanking him for the offer. Before I left, I made a point to ask him for a copy of the photographs — to which he seemed to stumble. I asked if he had an email or if he’d like to jot mine down.

“No problem — would you like me to jot it down for you?”

I told him. He again swore to remember it. We went our separate ways.

And I don’t want to assume, but I feel like I’m never going to see those photographs.

Maybe, at this point, you’re reading this and think I’m stuck-up. Or “up myself” or just rude. Perhaps you think I should have arranged to have gone for a drink with the guy who took my photograph and called me beautiful. And you know what? You might be right.

But there is a reason that this fear is ingrained in women. You can pick up a newspaper or browse Twitter and see those reasons typed up in the news section, in cathartic columns written by victims that have taken twenty years to come to fruition. Occasionally there is mottled purple and green photographic evidence.

Because sometimes there is a price to pay if you say no. If a guy asks you for their number and you say no, there have been women beaten for it. If you say no to a boy who asked you to prom, there have been shootings. Stabbings. Murders. And after all is said and done, there might be outrage for a week afterwards in the media that never lasts long. This has echoed throughout history.

No is a word that women have had systematically, violently and forcibly taken out of their mouths. No is wrapped up in all those dangerously familiar tropes we grew up with: the bitch, the nagging wife, the mood-killer girlfriend. No doesn’t make money or sell films or get your rocks off.

This is mainly down to the fact that there are people who thrive and benefit from the systematic silencing and attacking of women. They are film producers, studio executives, directors, famous actors, comedians, company directors, managers, employees, Stanford students, the President of the United States, teachers, neighbours. They don’t necessarily have to be in a position of power, but many are. Many utilise that to coerce their victims. The word no in this situation means: no career prospects, no money, no gas, no rent, no food. No has huge losses.

No gets you shrivelled up and stepped on in, let’s say; the film business. Sure, it might anger your attacker — but they can easily shrug their shoulders, pick another target and fill that role you desperately needed. Sometimes that is the way leverage is formed.

But sometimes you are simply alone with that statistical bowl of M&M’s praying you don’t get the poisoned one. There is never a reason for you to receive that bowl with poisoned candy, but it lands on somebody’s lap. You might have even wanted them originally, but now you know something is wrong. Almost like how out of niceness you accepted that invitation up to a hotel room or said yes to a drink in a club — then suddenly find yourself stuck between the Devil and the Deep Blue Sea.

There is a type of insidious guilt that seeps in at those moments. You’ve said yes but now something has changed. You can feel that dread in your bones and your gut but hey, you can’t say no now! He’s bought you a drink. He’s going to offer you a part. He took your picture and called you beautiful. If you say no, you’re heartless.

There are probably a few of you that still think I am indeed a heartless B for thinking an older man was a possible predator.

But with stats like these, surely you can begin to see why?

Originally, this piece was going to be a cautionary tale about being too polite. But after today I had to take some things into context.

Last weekend myself and a friend were harassed on the street whilst going to the corner shop. I’ve been groped in clubs, where it seems like a guaranteed occurrence. There has even been a family friend, one that had known me since I was small and grown up with his daughter – openly comment on my breasts at a celebration. It wasn’t appropriate. Stunned, I hoped someone else would intervene. Nobody said anything.

Another friend of mine was grabbed in a club where the perpetrator wasn’t thrown out by the bouncer that clearly saw it. He was only eventually removed and faced consequences when my friend proved she had marks.

And that resonates. The media wants proof of what happens in these circles daily, but when victims come forward it’s treated as a free-for-all. Mudslingers revel in calling their bravery attention-seeking, but complain when nobody comes forward in similar cases later. It is an insidious infinity loop.

So, to try and succinctly tie this up, all we can do is act for the future. I push the message that if you see something wrong: report it if you are able.

And I beg any men reading this to step up and help. Use your presence to intervene if possible. Use the privilege that incidents like this fuel, and instead try and break the cycle. Whether it is in a work environment, in a club or simply walking down the street — report it. If you feel like openly diffusing a situation will cause the victim harm, try to get them away from the scene and stay with them.

It is through actions and through solidarity with those who bravely speak out in a system stacked firmly against them, that the system can be dismantled. It may never be fully eradicated, especially when you observe how particular communities are eager to protect their big hitters. But we have to try.

Girl wonder, freelance journalist and writer-person. Also known as the female equivalent of Cameron Frye from the 1989 hit, "Ferris Bueller's Day Off.'