by Clare about a month ago in travel
Report Story

I didn't know Florida was the lightening capital! 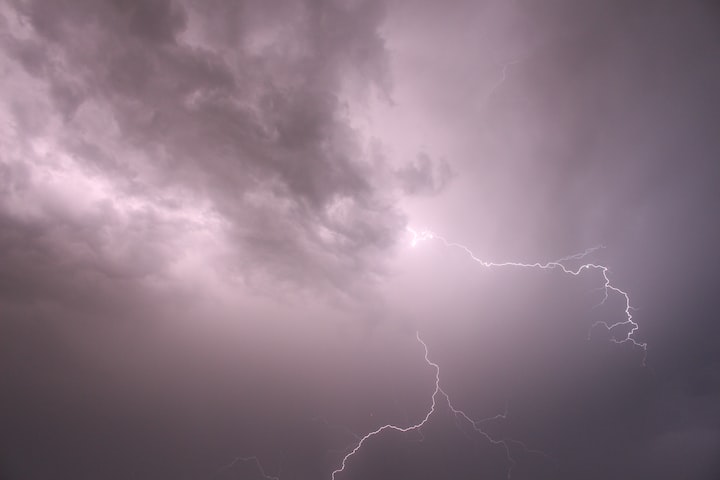 Photo by Osama Khan on Unsplash

Last Thursday, I spent an enjoyable day relaxing around the pool reading my latest book Hostage by Clare Macintosh. Probably not the best book to be reading when I have a 9-hour flight ahead of me next week but oh well. It was very good.

In the evening, we had booked a Japanese tepanyaki restaurant for dinner and were heading to an Irish bar for drinks before. We do love an Irish bar and manage to find one on almost every holiday, it’s only a matter of time before Cuba and the Maldives get one!

After a delicious dinner, we headed back to Murphy's bar and I was by now drunk enough to partake in some karaoke, I was shortly followed by a former pop idol & ex-factor applicant sterling, so if at any point, I had thought my singing was passable, I didn’t after that!

The following day, I felt so ill! Was this food poisoning or just a hangover? I hadn’t drunk that much, no more than I had drank the weekend before I went away.

I spent most of the morning feeling like I was on one of the rides I’d been on. The husband brought me a cup of tea (I packed some earl grey in my case) a belvita biscuit and a big pint of water I sat there and recovered whilst watching the first two Twilight films. In the afternoon, the husband headed over to Universal City Walk with the oldest boy to watch a football match in the sports bar, me and the youngest took our time getting ready, meeting them for the second half.

I decided to try hot fudge Sunday, suddenly hungry after all the queasiness. After I finished I saw a face I recognised entering the bar. Omg, it was Rob Beckett! Actual Rob Beckett.

I muttered to husband “ohmygoditsrobbeckettimnotevenjoking” why I needed to say it quite like that I’m not sure, but I did.

He was with his wife and daughters so I didn’t go over and ask for a picture or anything, also I was nowhere near drunk enough to make a tit of myself like I did when I saw poor Lee Evans out one night 🤦🏻‍♀️

Still overcome with feeling dizzy & sick I head back to the hotel and leave the boys to enjoy the ride.

On Saturday I woke up feeling better, I take myself down to the pool ready to spend a day in the sun, but the Florida weather had other ideas.

There was tropical rain on and off throughout the day. I stayed out for a few hours before giving up and heading back to the room for a shower.

We head out to a steak restaurant for dinner and I have 2 glasses of wine with dinner, when we leave I feel ill again. I go to the Irish bar with the boys but after 45 minutes I’m feeling worse and I’ve had the same glass of wine sitting in front of me almost untouched so I decide to go back to the hotel.

The following morning, after sleeping for almost 10 hours I woke up feeling no better. I force myself into the shower to join everyone for lunch. I'm already feeling incredibly guilty for not leaving early the last couple of days.

Again, food doesn’t help and my head and throat hurt, on the way back I go to the pool and get us some beds while the boys go upstairs to get changed they come down 90 minutes later, again guilt takes over and I decide to stay by the pool for a bit with them but in the end, I feel too rubbish and come back up to the room.

They are planning on going out for dinner and I just can’t face it so I spend the entire evening feeling not only ill but also like I’ve failed because I’m not going out with everyone. I just want to cry. So I did.

The boys come back early and the husband comes into the bedroom as I'm mid-cry and assures me it’s fine I’m not spoiling anyone's holiday so I start to feel a bit better.

Despite being tired, the husband and I end up staying up watching TV before I give in to sleep.

I sleep another 9 hours and wake up feeling a bit better although I still have a bad headache. The weather is appalling, black clouds, rain and thunderstorms, thankfully we had no plans today.

I spend the day writing, it’s become an anchor for me. I realise I have been feeling quite lost for the last couple of days, I miss my home comforts and I miss my little fur baby.

I’ve also missed reading articles on Medium. They do motivate me and boost my mood so I am looking forward to having the time and space to get back to reading those on a daily basis.

And guess what? I only bloody set up my LinkedIn profile. I've still got some tweaking to do so if anyone has any tips that would be very much appreciated you can find me here

On Tuesday we went to Seaworld, I still wasn’t feeling 100% so decided to give the rides a miss today.

The boys went straight on the manta ride and I decided to go for a little stroll around as the wait time was 30 minutes. Despite it being morning stop the sun was blazing down and I soon started to feel hot and dizzy.

I bought myself a bottle of sprite - £4! For a normal bottle of sprite. If I hadn’t felt so desperate for some sugar I wouldn’t have bothered! I realised I hadn’t eaten since yesterday afternoon. Oops

When the boys got off the ride we got some food and I perked up a little, although I was still overheating so we went to Antarctica, in Seaworld, and saw the penguins it was blissfully cold and the penguins were so cute.

I felt a lot better after that and even managed a couple of cocktails at the bar. After an entire day there we were exhausted and came back to the hotel where the husband and I chilled and the boys played in the pool.

I woke up on Wednesday full of anxiety, the worst I have had in a long time, my heart was racing my breathing was short and shallow and I felt so overwhelmed.

I found it very difficult being in a hotel thousands of miles away from home and my creature comforts and usual things I have to help me, so in the end, I just cried to the husband and let it all out, I felt slightly better afterwards but it was still lingering.

I spent a couple of hours in the afternoon by the pool whilst the boys went off to the Irish bar to play pool.

I did some writing before a thunderstorm came along and we all had to get under shelter, so I went back to the room.

That night we went for dinner at the Hard Rock Cafe in Universal City Walk before heading home for an early night.

Tomorrow we go to Disney!

I write about my life lessons to inspire.

You can reach me at [email protected]

More stories from Clare and writers in Viva and other communities.