by Mae McCreery 13 days ago in fitness

No, I do NOT kickbox. 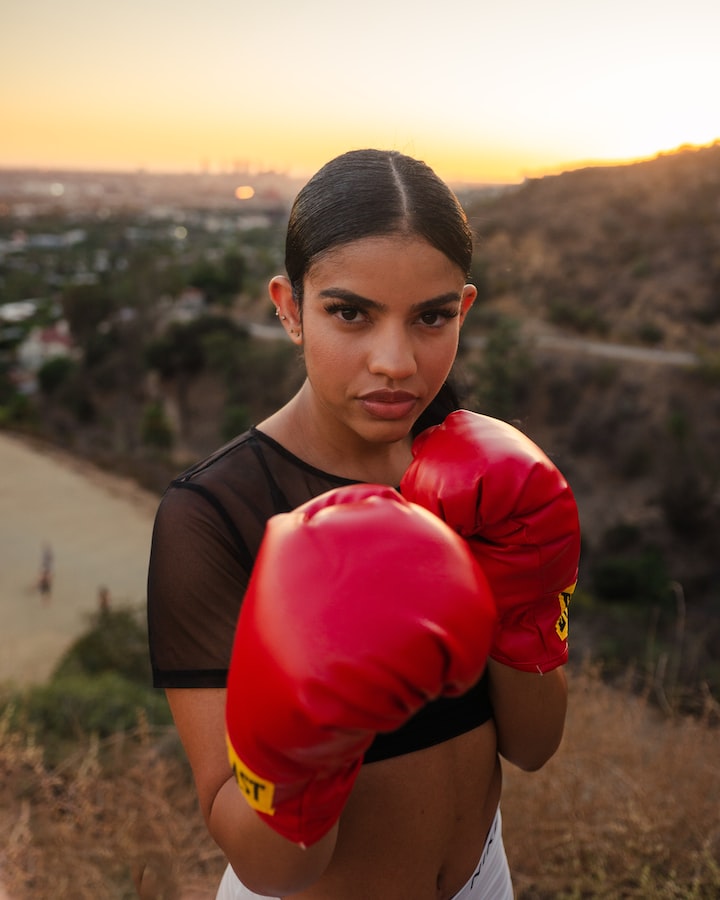 Photo by David Suarez on Unsplash

I’m going to give you all a bit of insight on what I look like. I’m 5’1” mixed White/Latina female, I’m 27 years old, petite-ish (small but i also am fluffy), I dyed my natural brown hair bright red, and I usually have some kind of henna on my body at all times.

Basically, I’m not a threat to anyone physically speaking. My best friend says I look like a chihuahua when I’m angry. Just yappy and jumping around and I’ll tire myself out in 15-20 minutes or I can be easily distracted with a treat.

So, it was a surprise to a lot of people that I started taking private boxing lessons at my local gym. I usually go to the gym a couple times a month, but during 2020 my schedule got a bit FUBAR’d and needless to say I gained a couple pounds and I want to keep my baggy clothes baggy.

I tried yoga and … that will be another article entirely.

My usual routine is just running or biking for as long as I can but after a couple months of that in 2021, I wasn’t really seeing a difference in my body. I tried a few other classes and programs my gym offered but I didn’t really like any of them enough to justify doing them on a regular basis. I’m not someone who obsessively goes to the gym and I go mainly because I want to stay in a shape other than a circle.

So, I emailed a trainer about taking a boxing class.

I’ve always been interested in boxing. My grandfather taught me a bit when I was a kid, but it wasn’t any ‘real’ boxing moves. He grew up in East L.A. and got into a lot of trouble; so he basically taught me how to take someone out at the knees and just break their nose with one good right hook. Neither moves are legal in the ring, I found out when I started taking lessons.

My lessons have been going pretty good, I’ve only been doing this for about two months now and it is invigorating. I struggle with some of the motions but I’ve been going to the gym in my off time and practicing on punching bags. I’ve gotten a lot better with my side practice and I’m having fun with it. I’m not saying I want to go pro, but my goal is to at least hold my own in a sparring session.

Now, even though I’ve been making progress physically; I find that I’m struggling convincing people that I’m not taking kickboxing.

I’m not against kickboxing, it is something I’d like to explore in the future, but I’m studying standard boxing.

However, everyone who asks me what I do at the gym, assumes that when I say ‘boxing’ I mean ‘kickboxing’ and it’s really starting to piss me off.

I was in a meeting a few weeks ago and I told everyone when we started that I had to leave at 5 p.m. because I had a boxing lesson. As we were wrapping up, my co worker told me to enjoy my kick boxing class.

“Kickboxing, right?” She smiled and nodded at me.

“No, just standard boxing.” I answered.

“Do you have to do that before you learn kickboxing? My daughter just took kickboxing.” She was really confused.

“No, I don’t want to kickbox. I just box like Muhammad Ali.” I said, then I got up and left.

The next day during my break, my boss came up to me.

“How was your kickboxing class?” She asked sweetly.

“I just take boxing, not kickboxing and it was actually really good.”

“Shouldn’t you take kickboxing?” She asked. “Since you’re a woman, not a man.”

I am pretty sure she heard me grinding my teeth but ignored it.

She got up and left and I went to the gym after work to take out my frustration on the punching bag. I bruised my knuckles pretty badly, but it looked worse than it felt.

About a week later, I had another meeting and before it started a coworker of mine sat down next to me.

“Jesus, what happened to your hands?” He asked, looking at the angry purple bruises over my pinky and ring finger knuckles.

“I had a boxing lesson and I’ve been practicing on my own time.” I answered quickly.

“Do you have any on your legs that bad?”

“Why would I?” I asked, really confused.

“Because you take kickboxing, right?” He said.

“No, I don’t.” I replied, I deserve an award for keeping that eye roll inside my dark soul.

“Was kickboxing not available?”

“I’m sure it is somewhere, but I train for standard boxing.” I was so grateful other people were filtering in for the meeting.

“I’m sure a kickboxing class will open soon for you.” He grinned, looking like he actually helped me with this supposed issue.

I think I enjoy beating the punching bag a bit too much. But I do have a lot of inspiration for punching it like a whack a mole game.

I spent the next two weeks with minimal instances of people trying to ‘correct’ me about what workout I do. As if I’M the idiot for taking boxing lessons instead of kickboxing, for the simple reason that I am a woman and women take kickboxing.

I was having problems breaking in my gloves, they were hand me downs and not in great shape when I got them. So, my trainer told me to go to a Sporting Goods store and get a new pair. I picked up a 16 oz pair of standard Everlast gloves, and a pair of fingerless ones with minimal padding. I have problems taking off the standard pair to take a drink of water when I’m working out so I figured the fingerless ones would be better when I’m practicing alone. My only issue was, I wasn’t sure if I had to wrap my hands with the fingerless gloves. I didn’t want to text my trainer and bug him on his day off so I looked around for a sales associate. I found a guy opening a pallet of baseball equipment.

“Excuse me, may I ask you a question?” I started. This guy turned around immediately and nodded vigorously.

“I was wondering, would I have to use compression wraps with these gloves?” I held up the fingerless ones so he knew I was asking about those specifically, and not the other pair in my hand.

“No, ma’am.” He shook his head. I said thank you and I started to turn around toward the register.

“The wraps are just for compression. It helps protect-”

“The knuckles and thinner tissue at the base of the fingers.” I finished for him as I turned back to face him. “I know, these gloves are for me. I box.”

“You know you picked up mens gloves?” He looked at gloves in my hands.

“I am aware.” I said curtly. I’m normally not rude to customer service reps in any capacity but this guy was testing every single nerve. “However, I prefer the padding in these gloves versus the ones for females.”

“Our kickboxing equipment is right over-”

“Shhhhhhh.” I said quietly. He looked at me confused, as he should have who shushes people like that? I was not thinking straight at that moment. I can admit that. “Don’t.”

Then I turned and walked away.

I bought my damned gloves.

I immediately went to the gym.

I beat the shit out of the punching bag once again.

I’m not a particularly violent person, I do imagine some people getting violently decapitated when they are being major douche n0zzles; but I’d never bitch slap someone for no reason.

But ever since I mastered a proper right and left hook while boxing, I’ve imagined demonstrating them for certain people who tell me that I kickbox and that I ‘must be confused’.

I’m confused? About what my exercise regime is at the gym?

Obviously, it’s my fault. Not the fact that everyone takes one look at me and thinks ‘vagina equals kickboxing’.

Just for my knowledge, I’ve done some research about female boxing and it’s much more extensive than I thought. Female boxing was introduced in the Olympics in 2012, 150 years after the Olympics began. Female boxing has been outlawed as an official sport for most of boxing's history. When women have participated, it’s been primarily as demonstrations or exhibitions. Since boxing is categorized as a combat sport, women have been banned from pursuing it around the world. In 1876, the New York Hills Theater held a boxing match between Nell Saunders and Rose Harland, the first official female match in U.S. History. The prize was a silver butter dish. 1954, Barbara Buttrick was the first female boxer on television as a flyweight at 98lbs and 4’11”. 1988, Sweden is the first country to lift a ban on professional female boxing.

Here I am in 2021, a female boxing for the love of it. And people still think that I’m kickboxing and how ‘cute’ it is that I ‘learned how to punch’.

At first, I was annoyed that everyone just assumed that I was kickboxing. Now, learning just a fraction of its incredibly oppressive history, I’m mad as hell.

If I wanna box, I’m going to box. Not kickbox. Not with a cute outfit, although I still look fire in my all black workout clothes.

I’m going to sweat, train, and work just as hard as anyone else that boxes with me. I don’t go to the gym to look cute, I go to the gym to work out the aggression that I can’t take out on the people that cause the stress I experience. Apparently, it’s frowned upon when you say you want to treat the next person that annoys you like a punching bag. Since I can’t beat the s*** out of the men that laugh and tell me how cute I look when I practice my punches; I have to take it out on the poor punching bag at my gym.

So the next time you see a girl hitting a bag with all the force of King Kong fighting Godzilla, don’t approach her. For your own safety.