Are Men and Women Really Equal in the Workplace

by Joanna Napier 12 days ago in activism

An insight into working as a modern day woman 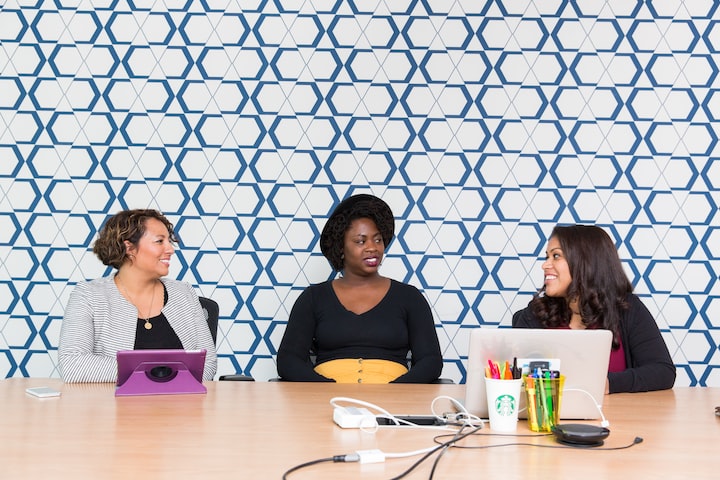 The mainstream media leads us to believe that after years of oppression women are now equal to men in the workplace, that the gender pay gap is a thing of the past and sexual harassment abolished with the help of the MeToo movement. Yet we still hear the cries from actresses in Hollywood about lesser pay compared to their male co-stars, and we are simply fed excuse after excuse about why this is the case. What we don’t hear is about our day to day hard working women and yet, according to CIPD the gender pay gap in the UK is at 17.3% with sexual harassment in the workplace still at an all-time high.

In 2017 there was uproar about the gender pay gap and big companies were told they had to provide their figures and data to the public for us to see how extreme it really was. Then in the October of that year the MeToo movement began to really go full steam ahead, women all over Hollywood were speaking out about the injustices they endured, thus giving women everywhere the courage to speak out about their own personal battles. From there we were promised things would change with immediate effect, new protection laws would come into place, there would be more female representation at higher levels, and everything in general would just be sunshine and rainbows. Yet, it is shown that over the past 4 years Corporate America has made next to no progress. The Mckinsey study shows us the drastic comparisons of men and women in the workplace, we see that despite having more bachelor degrees women are less likely to be accepted at an entry level position than men. 79 women are promoted to management compared to 100 men, the research shows us that women are underrepresented at every level and it is not due to the lack of education or ability.

It’s the sad truth that society expects women at home with their children, in 2021 we still hear “working mums” talk about the judgement they face for leaving the baby and wanting to build their career. We hear about the dreaded “mum guilt” where a woman has the audacity to feel guilty for wanting a career, for leaving the baby and for daring to have one selfish thing in her life. This dangerous mindset that women “take care” therefore leaving the men to “take charge” can subconsciously affect a women’s ability to push herself, be promoted or even enter the workplace at all. Since all we hear about is employers boasting about “modern flexible working” there should be an easier approach for women who want to have the baby and the career; just minus the shame and guilt.

A recent study called “still just a bit of banter?” surveyed over 1500 women and found that 52% were victims of unwanted sexual behaviour in the workplace. For women aged 16-24 this figure raised to 63%, these are the driving figures that show sexual harassment in the workplace is still a very large problem that no one should have to ever face, it is also a major issue in driving females out of the work force. Let’s look at infamous “boys club” workplaces that society views to be for “the boys” such as engineering, IT, construction etc; and the girls who are trying to bridge the gap and enter them. Shannon, who studies Construction Management at Herriot Watt University says “it is a worry for me to work in such a male orientated industry. I am certain there is still a large amount of sexism in the industry and it comes down to men struggling to take orders from women. In my course only 10% of us are girls and it is the same in the industry”. Iona, who worked in IT in Glasgow said “It was such a boys club, my company had no sense of the MeToo movement, men were constantly harassing or being inappropriate and passing it off as just banter. I worked my ass off for 5 years and moved up and my pay was still less than some men doing the same job”. This shows us that the issue is a lot closer to home than we think.

We’re told the issues are fixed yet it is clear that they aren’t. So, we can sit and watch as the same problems tear through generations of women, we can believe the promises made those things will change, we can shout and scream from the top of our lungs or we can educate those around us. Educate your sons, daughter’s, friends, nieces, nephews, colleagues; tell them what is happening around them, show them the information and teach them why it isn’t acceptable and maybe one day women will have the equality they deserve and a society that accepts their dreams.

See all posts by Joanna Napier →