Why did the former weightlifting champion become a "traitor to the sport"?

by milton ricarda 2 months ago in product review
Report Story 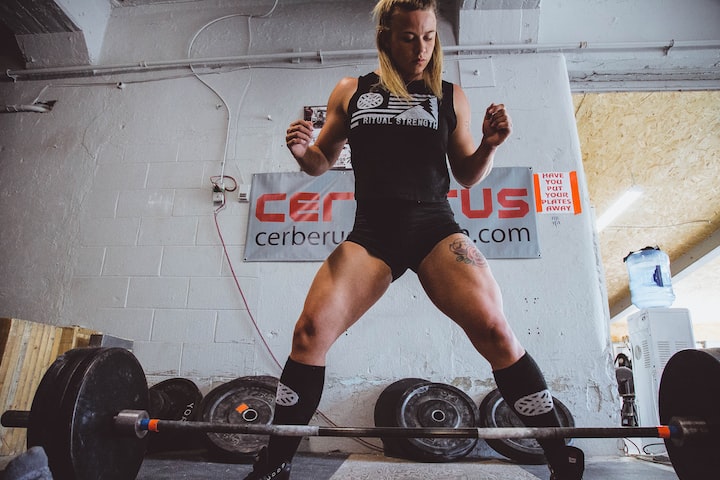 Photo by Alora Griffiths on Unsplash

In 2012, at the London Olympics, an Asian woman named "Maia Maneza" broke the world women's weightlifting record and won the championship in weightlifting.

At that time, some media recognized the woman named Maia Maneza as a Chinese weightlifter called "Yao Li", who has achieved a series of good results in the Asian Championships and World Championships.

The Chinese journalist was surprised by this situation, but then Maneza's words made us realize the real face of this person.

In the post-match press conference, a Chinese reporter asked Maneza questions in Chinese, but this caused Maneza's protest, the reason: she said she is not Chinese, her weightlifting career also has nothing to do with China, her heart only represents Kazakhstan, refused to answer and all the questions of China.

So, what is this all about? Why does Yao Li (Maneza) deny her past?

From a poor family, she joined the provincial team

Mya Maneza, formerly known as Yao Li, claims to be an athlete from Kazakhstan, born in the Kyrgyzstan region, but she was born in Dayingzi village, Mongolian Autonomous County, Fuxin City, Liaoning Province, and is a native of the Northeast.

Yao Li was born into a peasant family, and although the family is not very rich, under the love of her parents, Yao Li also lived a happy childhood life.

At the age of six, Yao Li was sent to the county elementary school to study, her academic performance is average, but has an amazing talent in sports.

During her secondary school years, Yao Li was selected to join the school sports team, mainly engaged in long-distance running and short-distance running training, according to the memories of school leaders, Yao Li had been a very hard-working child, and her running performance also progressed very fast.

At that time, Yao Li also thought that Sun Zhen is to recruit running athletes, so they cheerfully agreed, the two agreed to two months later, Yao Li to Fuxin City Gymnastics School to report.

However, after entering the gymnasium, Yao Li knew that the teacher who recruited him was not a running coach at all, but a weightlifting coach, and under no other circumstances, Yao Li could only give up her love of running and practicing weightlifting instead.

As it turns out, Sun Zhen's vision is very good, but Yao Li's level of progress is also far beyond the belief of ordinary people, from an inexperienced weightlifting re-people to a weightlifter who can lift more than twice their weight, Yao Li only used less than a year.

When entering the provincial weightlifting team, Yao Li still maintained high-intensity training, but during this period, some places made her unhappy, that is, as a young and beautiful young girl, her weight is increasing, has been divided into 53 kg, 58 kg, and 63 kg players, however, no matter how the weight rose, Yao Li's results still remain in the tee in the province

Faced with the departure of a familiar coach, Yao Li showed great reluctance, and Zhu Mingwu took the opportunity to invite his eleven trainees to develop together in Hunan, promising a better and more excellent training program. In this case, eight of the eleven trainees chose to leave with Coach Zhu Mingwu, including Yao Li, who had excellent results.

After coming to the Hunan weightlifting team, Yao Li's performance once again surged, and her life treatment has aeen improved. After that, Hunan weightlifting team got two "public foreign aid" quotas, which is to send our athletes to other countries, as players to participate in various competitive competitions, which is also a way to provide more opportunities for our athletes to participate.

At that time, the Hunan Provincial Sports Bureau, after a careful decision, intended to give one of the two places to Yao Li and one to Zhao Changling, and the two went to Kazakhstan alone to study and thus get the opportunity to participate in the Beijing Olympics.

During the Beijing Olympics, Yao Li appeared on the world stage for the first time and her performance was only moderate, but she did not finish the whole game due to a recurrence of her arm injury and missed the chance to win the honor.

A year later, Yao Li made a comeback, finishing sixth in the snatch, champion in the clean and jerk, and champion overall at the Goyang World Championships.

After the match, the official media of Kazakhstan interviewed her, but Yao Li could only coyly say "Hala Shao", then coyly closed his mouth, until a translator arrived in time, Yao Li can use a northeastern accent of Mandarin and Kazakhstan journalists normal communication.

At that time, a Chinese reporter interviewed Yao Li, asking her how her training in Kazakhstan was and whether she needed a Russian translator in her life, while Yao Li said in Chinese, "It's fine, it's fine over there, no need to bring any translator."

Up to this point, Yao Li had been able to publicly acknowledge her Chinese identity and didn't mind letting people know she spoke Chinese.

However, just two years had passed before that all changed. It turns out that after the Asian Games in Guangzhou, Kazakhstan found Yao Li is a talent, then proposed Yao Li join Kazakhstan's nationality, you can enjoy more quality resources training, in the lure of generous treatment, Yao Li directly abandoned the Chinese nationality, with the name "Maia Maneza", joined Kazakhstan.

It is reasonable to say that China has had its share of athletes joining other countries, and we can sometimes understand this phenomenon, after all, people go to higher places and water flows to lower places, if Yao Li is willing to have better development, we are willing to bless her, but Yao Li is different from other athletes who join other countries' nationality, she is an ungrateful person.

Although Yao Li represents not our athletes, but still feel happy for her, plus this women's weightlifting project, our player Chen Aichan also won the honor of a third place, so the top three at once appeared two Chinese tied, which is a matter of pride for many people.

At this time, a reporter who had interviewed Yao Li in the Asian Games took the initiative to run over and said, "Hello, can I interview you?"

In the face of the very familiar Chinese, Yao Li unexpectedly did not look up, she chose to ignore it. The Chinese reporter thought she didn't hear, and then shouted behind her: "Yao Li", she first looked back, then turned around and ran away as if she had made a mistake, leaving the Chinese reporter with a bewildered face in place.

Two hours later, at the press conference of the weightlifting competition, another Chinese reporter asked Yao Li a question in "Chinese", but Yao Li took the initiative to interrupt the reporter, saying that she was a Kazakh and only spoke Russian and English, and did not understand the meaning of Chinese.

Coincidentally, many of the reporters from various countries interviewed that day were former recorders of the Asian Games, and the circle of sports journalism is so big that everyone remembers that Yao Li is Chinese.

Then, an American reporter asked, "Hello, Ms. Maneza, I feel like we should have met before, at the Asian Games two years ago, at that time you were called Yao Li, an athlete from China."

To this question, Yao Li replied, "I have already said that I was born in Kyrgyzstan, I have not trained in China for weightlifting, and I have no relationship with China."

Yao Li's words made many foreign reporters feel very puzzled, some of the more serious reporters stood up and said, "No, lady, I have done your interview, we still have the photos of you winning the championship, you are the weightlifting champion of that Asian Games, I absolutely will not remember wrong."

Hearing this, Yao Li again sophomorically said, "I just lived with my family in China for a short period of ten years, my heart represents Kazakhstan, I am a Kazakh, please do not misunderstand me."

At the time, Yao Li this matter caused a big stir in the country, many people do not understand why Yao Li to deny her past as a Chinese, we have not disallowed athletes in order to join other nationalities.

We just don't understand why the motherland spent so much time and effort to train the talent, and eventually will be so ungrateful, even if they joined other countries, but also back to step on a sentence, saying "they have no relationship with China".

The next thing was picked up by netizens, during the London Olympics, the 53kg Kazakh weightlifter "Zulfiya" was also confirmed to be the former Chinese athlete Zhao Changling, who also broke the world record and won the honor of Olympic gold.

After the "Yao Li incident" broke out, her mother responded for the first time, saying that her family is honest farmers, Yao Li's father suffered from diabetes many years ago, the family only has more than 20 acres of land, hard work in the fields a year can only earn 10 or 20,000 yuan, Yao Li's father chose to do carpentry work, a month can earn an extra 2,000 yuan The income.

This is not a problem on the surface, Yao Li looks like a very filial girl, but if we think carefully, we will find that these things have nothing to do with Yao Li does not admit that he is Chinese.

You should know that the same athlete Zhao Changling, who also joined Kazakhstan, has never denied the fact that she is Chinese in public, and has even communicated with the media in Chinese many times.

On the contrary, "Yao Li", is avoiding the fact that she is a Chinese, denying that she was born in China, grew up in China, and that China trained her to take the path of "weightlifting".

We never disagree that people want to make money and have a better life, but you can't turn your back on your ancestors just to make money.

At the time, some others chose to speak up for Yao Li, arguing that the country's sports system was blocking Yao Li's development, otherwise, why would Yao Li have grown rapidly into a world champion once she was abroad?

In 2016, the truth was revealed that, according to the International Weightlifting Federation's tests, more than four weightlifters used drugs such as doping throughout the London Olympics, including Yao Li and Zhao Changling, who represented Kazakhs, and all of their winning gold medals were confiscated.

Then it was revealed that Yao Li and Zhao Changling's foreign coach named Alexei N., the coach also has a title called "God of Medicine", but his God of Medicine does not mean good, but that he often helps athletes to take banned substances, as a way to help Kazakhstan to grow performance.

The company's main goal is to provide a better solution to the problem.

After this drug-related scandal, we also understand why Yao Li's performance improved so quickly, and because of the violation of the rules of international competition, Yao Li is gradually abandoned by the Kazakh people, in the international major sports competition, no longer see her figure.

The world doesn't care about your self-esteem, it only cares about what you do to get results and then stress about how you feel.

More stories from milton ricarda and writers in Unbalanced and other communities.