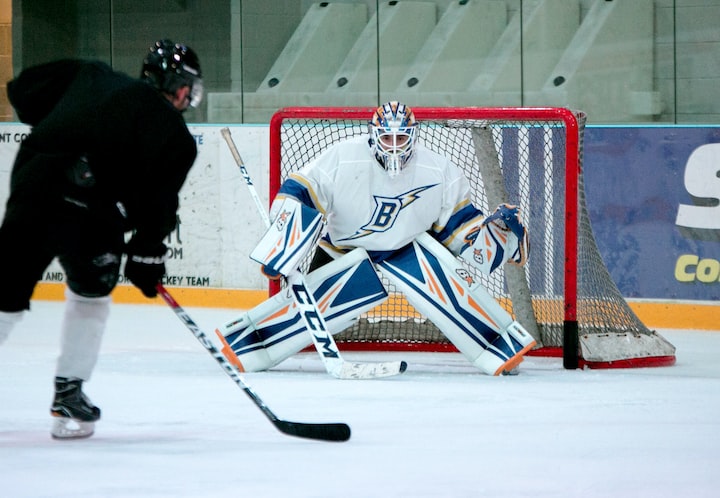 Photo by Andy Hall on Unsplash

Here are some tips about playing goalie. Besides making sure that you are properly warmed up before a game or practice, and you are properly stretched out to prevent injuries. If you feel yourself getting tight while doing exercises, take the time to stretch it out. There are a lot of ways to pull a muscle, sprain an ankle, or injure some other part of your body. I was a goalie, and now I am a massage therapist. I can tell when a person comes in from a sports injury due to not stretching when their body wants them to.

To be a great goalie, I took clinics, and all the advice I could from my goalie coach.

Now during a game, it seems like a lot of the time the goalie is just standing there when there isn’t a lot going on around them. That’s not quite true. Goalies are watching the puck at all times, as well as the players. They are keeping an eye on everything to make sure that they can block the shot. They are also slightly moving to be able to stay warmed up.

When the puck comes close, you may see that they skate out to the player, or the puck, this is to cut down on the angle. It is kind of like when you play pool. You need to look at the angles in order to give the person a smaller target. If you move out to meet them, it gives them a smaller goal to hit.

Tip: always stop the puck first. If you don’t stop it with your stick, your foot, or another part of you, as it is sliding to you, the other team takes it, from under you, for a free shot.

It happened to me in a game. I went out to meet the free flying puck, as my team was changing out, and I didn’t stop it with my stick. The player coming at me, was skating slow to see what I would do. When I went down to cover the puck, WITHOUT stopping it with my stick first, it went right under me. She was able to skate around me, and make the shot into an empty net, because I was still stuck on my knees. So, before you drop, make sure you have the puck, or make sure that your team is there. The other person will take advantage of a free puck and a free net.

Tip: is to always keep your head up. Even if you have the puck under your glove, and you know that it is yours, everyone may keep fighting for it. If you put your head down, you may miss them getting it out from under your glove, or end up getting hurt from a player coming at you.

Also, you want to keep your head up incase there are any chances of a fly away puck. If your team shoots it down to you for an Icing, they want to do a line change. LET them. Don’t stop the puck, don’t go near the puck, just follow it to the goal line to make sure that it is going to make it to the wall. If you head is down, you may miss a play, and the other team sneaks in behind you to make a shot.

In a game, there was someone calling my number from behind me. They were standing at the Zamboni gate, looking to get me distracted. I took one look at him, to see what was going on, and almost missed a power play. Fortunately, my team was faster, and was able to get the puck back in time.

Tip: a key aspect to being on the team, is to make sure that you communicate what you need. If you need your team mate to stand in a particular spot at a face off in your end, let them know. You can either verbalize it, or tap them with your stick. This will be able to help you see the face off better as well as let your team mates know that you trust them to watch your back. They just need to know where to go, sometimes.

They will also communicate back on what they need, or how you can help them.

Tip: Watch your game stats. It will help you be a stronger player, if you pay attention to what you could have corrected from a game.

My dad used to have drawings of the ice rink. On it, he would track where the shots came from, and if it was a goal or not. He did it for both teams. At the end of the game, he would also personally congrat the other team on playing hard. He didn’t know the rules of the game. He didn’t know how to skate. He knew how to count though.

There was a game where the other team didn’t get a chance to come close to scoring on me. I was getting so hot in my gear I was melting the ice. This made it harder on the other goalie during second period since the net kept moving. She had 160 shots on goal. Only 12 of them went past her. Hearing this, helped her dad see that she did really well as a goalie, and it helped her know that she didn’t let that many go by.

It wasn’t her fault that my team had been playing together for 4 years at that point, and we were faster than they were. We also passed the puck, and communicated throughout the whole game. Personally, I was going crazy not having anything to do. It was still an enjoyable game.

After games, he and I would share this with my goalie coach, and he would help me work on these angles while the team did their own drills. This way I was able to learn to cut down on the angles as well as where I needed to improve. Having these stats really improved my game as well as my team mates since they were also able to learn where their strengths were too.

More stories from Rachel E Tobin-Guggenberger and writers in Unbalanced and other communities.