by Rachel E Tobin-Guggenberger 2 months ago in hockey 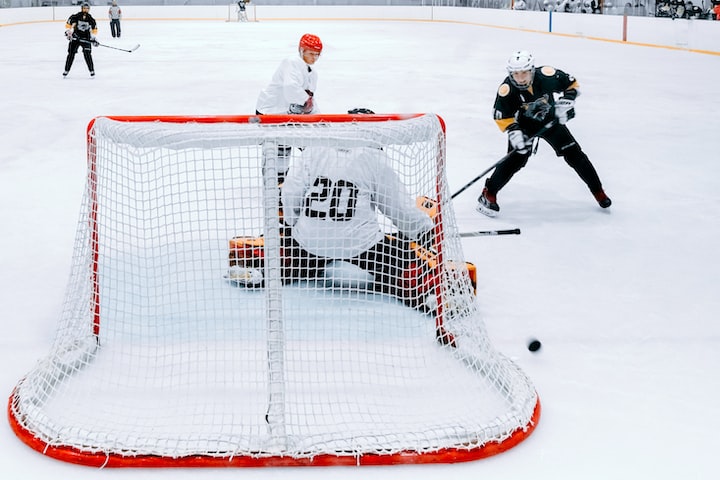 Photo by Ildar Garifullin on Unsplash

Ice Hockey Goalie, is one of the hardest positions to play, as well as important. There is a Center, Right Wing, Left Wing, and Left Defense and Right Defense. All of which are important in the game of hockey. The one position that isn’t really spoken about is the Goalie. The complications, the stress, the adrenaline, or the dangers. Every sport comes with dangers, some aren’t even heard of or known about. Here is my story of why I had to stop playing.

As a young girl, I played Goalie for Highland Central Community Hockey, in Saint Paul, Minnesota. That’s where I started when I was 8 or so. It’s where I fell in love with the sport, with the ice, with my team and with my coaches. I learned a lot from the team and my coaches. I took goalie clinics as well as spent extra time practicing off the ice. It’s all I could think about from the first time that I put on my skates.

My career and love for playing ended in a triple tragedy. First, my Sophomore year, I was put in a school where there wasn’t a high school team, and since my school day ended at 4:30, it was a little hard to get onto the team. Second, that was also the year that I was diagnosed with Type 1 Diabetes.

My Junior year I went to the high school try-outs. I didn’t want to give up my dream of playing for collage. I had scouts looking at me from the U of M in Duluth, before I even hit high school level. That was a dream that was shattered after the diabetes, as well as an accident that could have been prevented.

The third reason, it was destroyed was because of an injury I received during one of my games, in my starting years. I was about 10. It was a Tournament, and I was running late to the game.

Like all good players, I had a routine, in the morning eat my Lucky Charms, on my way to the game, my SpaghettiOs with meat balls. I would arrive about an hour early to games to get warmed up. I would run steps, jump in place, even dash around the parking lot to get the blood flowing, and my adrenaline up. Then I would stretch. I would stretch before I got in gear, and after to make sure that I was ready to go, and that the straps holding my pads in place where just the right tightness. Then I would hit the ice with my team. I would make two laps before stretching again. I wanted to make sure that I was limber and ready for action no matter where the game took my body.

I wasn’t much of a ‘down’ Goalie, my coaches could tell you that. Although I did what I had to do to stop that puck, no matter what. That night, I was late, I didn’t get to warm up before I got into gear, and I didn’t eat my ritual. That night changed my life. It was second period, I was hyped up on adrenaline, the score was tied at 4. I went down in the Butter Fly, something that was a rarity for me since getting up with about 200 extra pounds of gear is hard when you are sweating, and looking for the next player to shoot.

I felt a tear in my right knee, the same as my left. I was in a lot of pain, and didn’t know if I was going to be able to finish the game. Since I played Community Girl’s Hockey, there wasn’t a replacement for me. I knew that no matter how much it hurt I had to keep going. For myself, for my team. That night I took some hard hits from some players. In the end we won. 6 to 5. It was an amazing game. One that I will forever feel proud of playing.

After everything ended, I got out of my gear. My knees were pretty swollen, and they burned like crazy. The pain, didn’t faze me at this point, I was too excited that I was able to stop the last of the shots in third period. My team was excited because we won. We were all jumping around in the excitement.

I didn’t go to the doctor that night, or the next day. I held it off for a few weeks, thinking that I was going to be just fine. Then during practice, the pain hit me again. I didn’t know what hit me. I just fell, and I had a hard time getting back up.

Turns out that I spent years in and out or Physical Therapy to get my knee strength back up. I spent even longer hoping for a miracle cure. I still to this have some knee issues due to not stretching that day.

After my third day of high school try-outs, was when I knew that my career was over. That living my dreams of going to college on full scholarship was going to end. And I knew that when I worked with younger skaters, or really anyone when it comes to getting into sports, always stretch. Never go in cold. It can be the most dangerous thing that you can do to your body.