by Veronica E 3 months ago in politics

My view on Immigration. 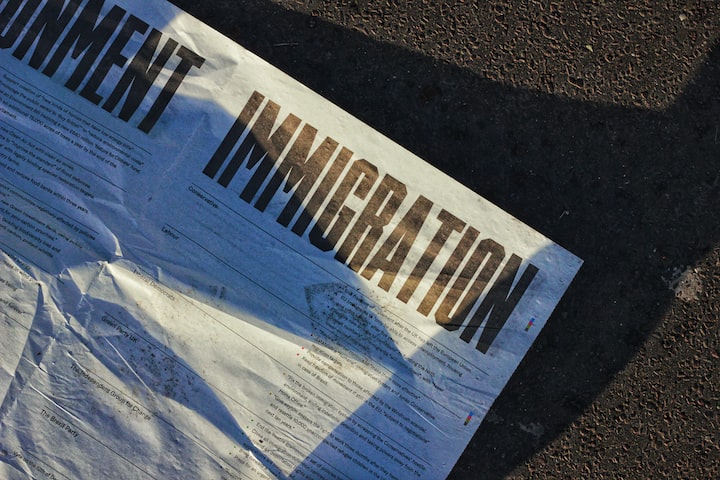 Photo by Metin Ozer on Unsplash

Border Patrol is an institution from the government that retains people who try to cross the border. Resources and people is needed to complete such a job and because millions of people try to cross the border every day it makes it difficult for the people that tries to protect this country. When a person is detained by the border patrol they take your fingerprints because not all the people that crosses the border are trying to get a better future, some of these people are criminals that are running away. Even though The United States had many presidents not all of them have come up with a reform that would help the Border Patrol agents. In the year of 2014 The United States suffer from a massive immigration of minors and their parents/relatives; In this year it was when the Border Patrol most needed resources and people. Obama’s Immigrations speech states “ First, we’ll build on our progress at the border with additional resources for our law enforcement personnel so that they can stem the flow of illegal crossing and speed the return of those who do cross over”.

The United States has always been the land of the free and Barack Obama acknowledges in his speech that immigrants are a plus for this country's economy. He also reflects on our ancestors who once were also immigrants that built this country. Citizens were and still are concerned that immigrants would come and take our jobs, and resources. But the same immigrants that come to this country are the ones that keep our economy up. How immigrants contribute to this country's economy? Taking jobs that citizens don't want to do as farming and cleaning. Some of these immigrants even open their own business and pay taxes. Many of these immigrants had lived in this country for most of their lives they would pay taxes( because it is possible to be an immigrant and pay taxes), and be a part of our community and not once they were acknowledge since Obama’s reform. According to Obama’s Immigration Speech “ I’ll make it easier and faster for high-skilled immigrants, graduates and entrepreneurs to stay and contribute to our economy, as so many business leaders proposed.” Obama’s speech also acknowledge people that have been living in this country for years “ If you’ve with been in America more than five years. If you have children who are American citizens or illegal residents. If you register, pass a criminal background check and you’re willing to pay your fair share of taxes, you’ll be able to apply to stay in this country temporarily without fear of deportation.”

At the time with the new reform and having people crossing the border at a daily basis Obama kind of knew that this would create confusion for immigrants. Also because not on these immigrants that were crossing everyone knew that in between that good people that just wants a better future and life there were also criminals. Criminals that were taking advantage of this country, that wanted to pass as good people. In order for the government to know who was a criminal and who wasn't, they decided to run background checks. This new reform was only applying for people that had been living in this country for years and that already had a life in this country and wanted to be in the right path and the president wanted to make that real clear. The president wanted immigrants to know that this reform was for them to stay in this country temporarily not forever. Obama states in his immigration speech “ This deal does not apply to anyone who has come to this country recently. It does not apply to anyone who might come to America illegally in the future. It does not grant citizenship or the right to stay here permanently, or offer the same benefits that citizens receive.” He also decided to acknowledge these criminals that were trying to enter the country “ Of you’re a criminal, you’ll be deported. If you plan to enter the U.S. illegally, your chances of getting caught and sent back just went up”.

Obama’s Immigration speech and reform was to help the Border Patrol and to acknowledge those immigrants that contribute to this country. Every citizen is still afraid that illegal immigrants would come to this country and take their jobs. But what this country has forgotten is that our ancestors were once immigrants who were only looking for a better future like anyone else. This country was built on the back of slaves and immigrants; but they get treated like nothing. Citizens had forgotten that there is only one race the Human race and that we are all sisters and brothers that want the best for our families. It is fine to be scared of the new people that is coming because not all of them are good people but if we stand together we can make a better future for everyone.

If you want to learn more about these experiences tipping writers always help when sharing new experiences and stories.

See all posts by Veronica E →